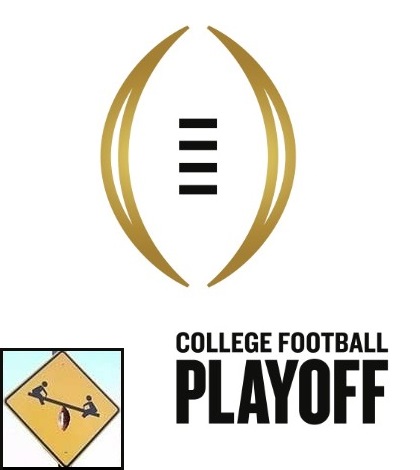 Small schools like Temple have broken the 2016 College Football Playoff field into 3 tiers of teams. But can these undefeated squads steal a spot from powerhouse universities? Let’s debate.

The first edition of the College Football Playoff committee rankings come out next week. This is exciting not because it determines who is in the lead to this point, but because it tells us what criteria the committee values.

With Utah going down to USC this past weekend, a likely top four from the committee (depending on this coming weekend of course) could include Ohio State, Baylor, LSU, TCU, Michigan State or Clemson. Those are the top six undefeated clubs. Which pair of teams gets left on the outside is semi-interesting but all six won’t finish undefeated anyway.

ALSO ON BUZZCHOMP: New York Mets Ahead of Schedule in World Series

On the next tier rests the likes of Alabama, Stanford, etc. There are other undefeated teams in the middle of Power 5 conferences too like Iowa and Oklahoma State. Those teams will sort themselves out as well by the time the playoff rolls around.

The more interesting group is the undefeated teams outside the Power 5.

Where will the committee rank Memphis, Toledo, Houston and Temple? This will be fascinating. They need to be ranked relatively close to the top 10 to be in the running. If they are too far behind in these first rankings, that would mean even a perfect record won’t get them to the top by the end. There would never be enough losses to go around for the teams ahead of them.

Where do you stand on this group? Some of them have good wins, but each team’s conference slate will obviously not withstand a comparison to anyone from the major conferences. Would you rather see, for example, an undefeated Temple team in the playoff or a two-loss Alabama team? 13-0 Memphis or 11-2 Michigan or 12-1 Utah? A lot still has to happen and go right for this to even matter, but the first ranking day is the time to begin wondering.

I’m both thrilled and surprised by the current top ten teams, who all legitimately have a shot at making the college football playoff as one of the game’s final four. I like your tiers, so I’ll stick with them and add in some fun names to put a pretty bow on this football debate. Note to our readers, we hold no ill will towards any of the schools or football programs. Some schools will simply never play for the title, no matter how many games they win. Sorry, not sorry.

Let’s tackle our tiers in reverse order, starting where you left off with our “Small Pond” group of teams. These are big fish in a small pond, the schools way better than their divisional competition. Yet throw them in the ocean of the greater college football landscape, and they immediately get lost. Can they swim and compete? Who knows; its impossible to find them in such a large ocean of gridiron.

Take Temple for example, who is currently 7-0 overall, playing in the American Athletic Conference. There are two other undefeated teams in the AAC alone, as both Memphis and Houston have yet to lose a game this season. Not to pick on Temple, who does have a few solid wins on its 2015 resume, but there is no one on their remaining slate of games who can legitimize this team over a one loss Utah, or two loss Alabama. Even victories over Notre Dame and an undefeated Memphis, running the table to finish the year, does not elevate Temple into the Final Four.

This is the harsh reality of college football. There are A LOT of very good football teams. Utah got outplayed by USC this past weekend, but that one loss does not make Utah a bad team. They are legitimately better than anything Temple has to offer this season. But both teams will be on the outside looking in, so forget tier three. The real action is with our tier two schools.

The “Scarred” tier of football teams is the one to watch in the upcoming playoff rankings. Seven of the top ten teams in the AP 25 are undefeated, but there are a ton of really solid one loss teams right now. Where Alabama and Notre Dame fall in the initial rankings will ultimately determine their ability to snatch a playoff spot over another one loss school (a currently undefeated team who loses a game late in the season).

I don’t think the entire college football playoff field will consist of undefeated teams. Our tier one of schools, all undefeated at the moment, will thin out quickly as the season progresses. I’m predicting three of four teams are undefeated in the ultimate playoff bracket, and the fight for that final spot among one loss schools will be fierce.