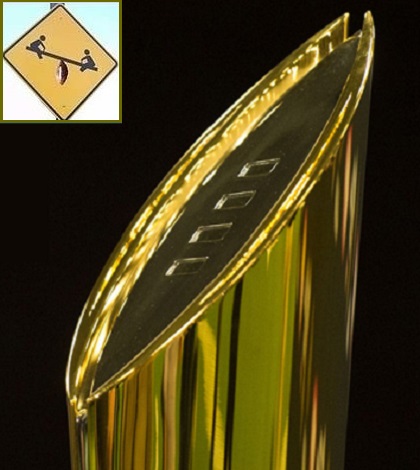 The Final Four was obvious, but the title game and champion are anything but. Can the Crimson Tide keep rolling, or will Clemson’s Heisman hopeful take them to a title? The only 2016 College Football Playoff predictions worthy of debate.

We have reached the culmination of the college football season. The final rankings for the College Football Playoff have been released. Overall, the committee had it real easy this year. With a bunch of possible upsets lurking that would leave very tough decisions for the final four, all the favorites advanced through their conference championship games.

Instead of fascinating decisions splitting hairs between Stanford and North Carolina and what would happen with Ohio State, the top four for the playoff is not even debatable. It wrapped up even neater than last year.

This is a pretty solid and even foursome to be honest. All four teams are Power 5 conference champions. Clemson remains undefeated while the other three all have just one loss apiece. The Tigers and Sooners have good offenses. Alabama has a great defense. Michigan State seems like the most balanced of the group. It is hard to find separation here.

I also like Alabama to advance. Michigan State seems like the weakest of the four in the playoff. The Spartans have struggled for long stretches of the season despite their excellent record. Alabama can’t slice people up through the air, but it does pretty much everything else.

If we had a title game between the Crimson Tide and the Sooners, I’d lean toward Alabama because of coaching, experience, defense and the ability to lean on Derrick Henry. In a very down year overall for the SEC, the conference may still come out on top.

For me the 2016 Playoff comes down to the best players on the best teams. Both Oklahoma and Michigan State have had excellent seasons, but were exposed at one point during the year. Neither has the x-factor player that their competition does, and neither will come out on top because of it. The top candidates for the Heisman Trophy reside in Clemson and Alabama respectively. This is no coincidence. This is the difference in round one of the playoff.

If Alabama was taking on Oklahoma in the final, I would agree with you. But the Sooners are not getting by Clemson, and the Tigers are not losing to the Crimson Tide. The ability of Derrick Henry to take over a game is limited by his position. At running back he can only do so much. Conversely, Clemson quarterback Deshaun Watson can and will carry his team to a championship.

It’s unfortunate that the Heisman Trophy gets awarded in December, because the Playoff means everything in determining who should win. I like Watson to lead the Tigers to victory, stepping over Henry in the process. While Alabama’s defense is exceptional, the Tigers are undefeated for a reason. That reason is named Deshaun, and he will carry his team to a perfect season.