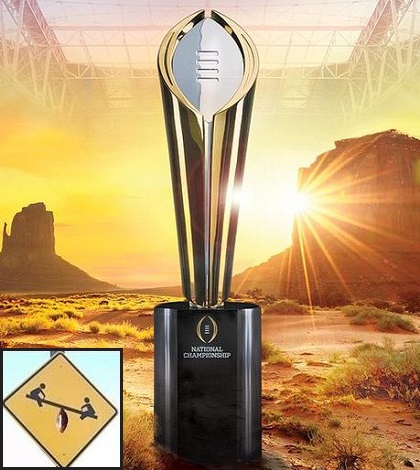 The 2016 College Football Championship mercifully ends a boring bowl season. After an excellent regular season of games, the bowls were irrelevant and the playoff predictable. Even with a deserving champion, college football has a problem going forward.

The College Football Playoff national championship is tonight, pitting the Clemson Tigers against the Alabama Crimson Tide. It’s the culmination of a season that has left something to be desired in a number of departments.

These seem like the two best teams, so there is really no problem with the matchup itself and crowning one of the two as national champ. But the way the semifinals played out, it makes you wonder whether a team like Stanford had more claim to a playoff spot than Michigan State, whose resume was lacking other than a Big Ten title.

It also should make fans and athletic departments reconsider what we thought we knew heading into this year in terms of scheduling. Teams needed to schedule good, out-of-conference opponents to build their resumes, the rhetoric went. But it turns out, if Stanford (or Notre Dame or whomever) had scheduled cupcake games early in the year and won those, they could have been a playoff team instead of Michigan State. The resume didn’t hurt them; the loss did.

It’s also worrisome how completely irrelevant the bowl games were this year. Even the teams felt it, which has to be why Iowa didn’t bother showing up for the Rose Bowl (figuratively, of course). We already touched on what to do with the bowl games a few weeks back, but it’s worth mentioning the reasoning again as we head into the season’s final game.

TV ratings were way down for the semifinal matches because the NCAA wanted to claim New Year’s Eve as its day, a la the NFL with Thanksgiving and the NBA with Christmas. The public collectively declined the offer. That seems like another bad sign moving forward, especially with broadcasting deals having been set years in advance.

You have any closing thoughts on the college football season; how things played out; whether I am overreacting to these future worries? I like Alabama to win the title game if selecting a team straight-up but would back Clemson to cover the touchdown-plus spread, for whatever that’s worth.

I like Clemson to both cover and win this game straight up. While Alabama may feel like the better team from a media standpoint and on paper, I like what my eyes have shown me of the Tigers. Clemson has destroyed the eye test all season and rolls into the title game undefeated with a huge chip on their shoulder. Never losing and still being the underdog is a rare combination that gives the Tigers an edge. They win a very close game, sending the Tide home disappointed.

Whether Clemson remains undefeated, or Alabama captures another championship, this college football season will be remembered as all chalk. One could debate who else was more deserving of a playoff spot than the likes of Michigan State and Oklahoma, but the best two teams are in the national title game. The system worked for a second straight season, as the best two teams played their way into the title game. The complete lack of significance for the other bowl games has been the obvious consequence of this success.

I’m not worried about college football going forward for one reason; the playoff is a great thing. You can’t make a huge change to the system without fallout, and I’m willing to sacrifice the significance of the other bowl games for a killer College Football Playoff. Unfortunately, the first playoff round this year was not that exciting. I don’t think playing the games on New Year’s Eve was a good idea, especially with New Year’s Day sitting right there on Friday for the taking. But what day the games were played had no bearing on the lack of competitiveness. The season itself remained exciting until the second to last week, just like in the NFL. It was down to the wire for a playoff spot. That is what’s good.

I don’t think you can save the other bowl games without expanding the playoff. You grow the playoff and its excitement, including other ‘bowls’ in the process. Why should fans care about a meaningless matchup that’s basically a glorified exhibition game? Why should the players care, when half are thinking about whether they should declare for the NFL draft or not? Schools get a big payday, otherwise there are no winners outside of the National Champion.