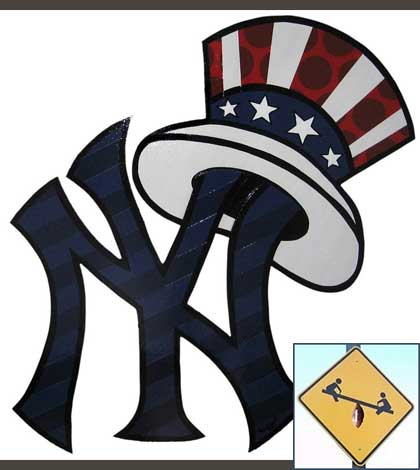 Are the 2015 New York Yankees a team in limbo? With four high-priced veterans sucking salary, can they perform up to their former levels of excellence, or will they suck this Yankees team into a season of limbo? MLB sports debate.

[Will the 2015 New York Yankees be rebuilding?]

You and I have vastly different opinions of what constitutes rebuilding.

For a team to be rebuilding, there must be some level of newness. There must be an influx of new players and/or coaches. There must be young players added or called up. There must be prospects on the precipice. The Yankees don’t really have any of these things. When you say rebuild, you must mean, “waiting for old, terrible contracts to expire.” There isn’t anything else going on here.

Where is the team going until these albatrosses come off the books? Sure, we can throw a young guy in at second and we are most likely doing so at short. But the meat of the roster is tied up in four guys who are still owed around $90 million per year. That doesn’t even count still productive players making a shit ton of dough like Ellsbury.

There is little wiggle room on this team even though it wasn’t very good last year because of contract size and opportunity cost. Paying someone like Teixeira so much money is bad enough. Playing him everyday because he is being paid that much is a double whammy.

It’s funny; I actually somewhat like the Yankees’ chances next season. I have such high hopes for the pitching staff. And yet, whether the team is good or bad, it’s so far removed from anything resembling a rebuild. We’re just waiting out the storm here, stuck in limbo for at least another year or two.

I’ll see your idea of rebuilding and raise you the idea of what constitutes limbo. The 2015 New York Yankees are not stuck in contract limbo.

Let me start with the pitching staff, that as you noted is sizing up to be amazing and the team’s strength. CC Sabathia is entering a contract year. If he has any hopes of obtaining a multi-year deal to finish out his career, this will be a major comeback season for him. Contract years are traditionally big stat years for star players, especially ones coming off injury and down performances like Sabathia. Let me also remind you, CC does not need to be the Yankees’ ace. He doesn’t need to be the number one pitcher. Setting aside salary, he can slot in at the two or three and this rotation is still solid top to bottom.

It appears you also have a Mark Teixeira bias going on. This is understandable; the man has been injured rather consistently over the last few seasons. But when Mark was on the field last year, or at least at the plate, he performed quite well. If Teixeira can put together a full season of injury-free baseball, I fully expect him to bat close to .300 with around 25 to 30 home runs. Have you seen him lately? He’s been working out like a beast. Don’t write off the 2015 New York Yankees’ first baseman.

I know you slotted Beltran in right field, but he is truly more of a DH at this point. I don’t know what the Yankees get out of him. The same goes for Alex Rodriguez. A-rod might be a decent third baseman, or he might be more of a DH as well. Those two men are wildcards, unknowns. But Rodriguez has everything to prove. You can not underestimate a player’s need to prove himself.

If I’m being generous, I’ll give you three players in limbo, meaning their upcoming performances are unknown. But have you forgotten what team we are discussing? Why does salary bear any weight on this conversation? The New York Yankees can spend as much money as they choose. It’s in the long-term interest of the team to not attempt to replace the fat salaried players in ‘limbo’ with other fat salaried players. Thus a New York style rebuild is happening.

When a team chooses to bring in young players, to not desperately spend money to fill holes that may not even exist, and to rely on core veteran experience, I call this smart baseball decision-making. And when those choices are being made by the New York Yankees, reversing a decade long trend of doing practically the opposite, I say the team is rebuilding. If not in the traditional sense that has never applied to the Yankees, then at least in its own way.

If rebuilding does not apply to the Yankees, then limbo can not possibly apply either. The New York Yankees are certainly headed in the right direction. Whether the puzzle pieces all fit has yet to be proven.

[Part two on Friday – An MLB offseason to remember]