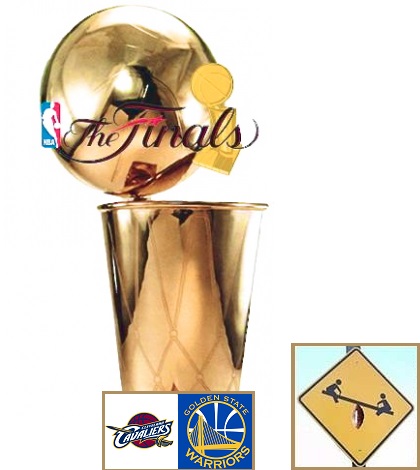 NBA press conferences can get boring, but Stephen Curry’s daughter has made them magical. The 2015 NBA Finals will be way better with more of Curry’s daughter and her antics, am I right? Before debating the stars, we debate their kids.

Last week, we talked about the NBA Finals matchup in a wide-lens sense and about how the entertainment value of the basketball playoffs compare with what the NHL has to offer. I wanted to delve deeper into the Cavaliers and the Warriors though, specifically their two stars.

But before we get there, I need to touch on your final thought from Friday: “I for one hope Curry’s daughter makes one more appearance before Game 1 kicks off.“

There are two clear sides to this ‘child-in-press-conference’ goings-on, and I can see both arguments. On the one hand, these post-game press conferences are silly and boring, and the children spice them up in terms of entertainment, so what’s the harm? I personally agree with this first side. The press conference is utterly pointless. I never watch them nor gain any valuable information from what any of the athletes say in them. So what’s the difference if a kid muddles them up?

However, as convoluted as this sounds, while I share that feeling, I actually think the other side of this argument is correct.

The players are there to do a job; the press conference is part of their job. They are required to be there and answer questions. This happens after games during the regular season as well, but it takes place in the locker room so there are no families poking around. The press conference is also part of the media’s job. Reporters and journalists need quotes for their articles and have deadlines. Whether I personally think the quotes are useless or not is irrelevant. The fact is little kids should not be interrupting these people’s jobs. It is incredibly unprofessional and comes at arguably the most important conferences of these players’ lives.

Where do you stand on this? And then let’s move on to Curry’s daughter’s father because I want to know which player you’d rather have moving forward, Stephen Curry or LeBron James.

You just made my Monday morning infinitely more fun, with talk of Stephen Curry’s adorable daughter and her hilarious antics. The NBA Finals will be infinitely more fun with her allowed to play. But as for where I stand on the issue of press conferences, it’s all about balance.

It’s true that press conferences are where media people are given the opportunity to best do their jobs. I’d argue that the press conference is also where the star athletes and coaches do their darndest to say nothing and give nothing away, while simultaneously fulfilling their obligation as dictated by the rules of the league. Press conferences generally stink for this very reason. Players and coaches are contractually obligated to speak, yet gain absolutely nothing by saying anything of value.

This is never more true than in the NFL, where the post game pressers are hilariously stupid. In the NBA you often get some thoughtful feedback about how a game went, but if both teams are still in the midst of a competitive series, no one wants to say anything to give an edge to their opponent going forward.

What players and coaches do want to say are things that confuse, complicate, and lead one down a dead end, ultimately mucking up any thoughts you may have had about their future game plans. Enter players children and the adorable daughter of Stephen Curry.

While in truth bringing your child to a press conference is unprofessional, I see nothing wrong with it. As a player, if I’m being required to speak to the press within twenty minutes of the game ending and the only thing I really want to do is see my kids, I’m combining the two. End of story. Many of the questions asked of players are equally as unprofessional, are usually cookie cutter, and frankly need a shot of fun that only a child can ignite.

The video of Stephen Curry’s daughter playing hide and seek with the thick black drapes while her father attempted to keep a straight face and answer questions after their final victory in the Western Conference Finals was amazing. She kept popping her head out, running around exploring everything, and making a boring event into a memorable evening for everyone involved.

Perhaps I just have a sweet spot for kids, but frankly anything that spices up press conferences is good for the sport and everyone involved. When Kevin Durant and Russell Westbrook both wore giant nerd classes and bow ties together, that was a hilarious press conference. I want more of Stephen Curry’s daughter.

As for which player is the best to lead my NBA team going forward, Stephen Curry or LeBron James, we will debate that on Friday. Game one will be decided, but the series will be wide open.