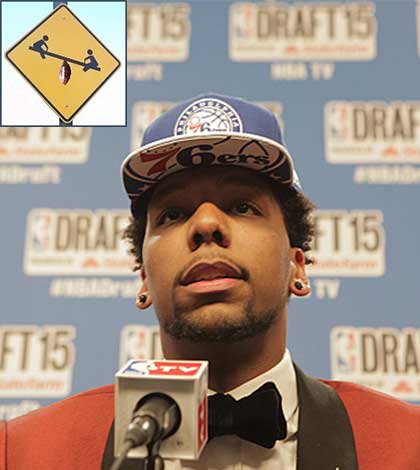 Philadelphia 76ers fans booed lustily when the Lakers picked their point guard in the 2015 NBA Draft. One pick later the Sixers drafted ANOTHER big man in Jahlil Okafor. Is the tanking over, or has Philadelphia’s process backfired?

The large crowd is also a sign of the folks of Philadelphia believing in the rebuilding process put forth by general manager Sam Hinkie. In fact, I saw a couple of guys wearing this t-shirt.

The first pick of the draft was a foregone conclusion and generated no reaction from the Philly crowd. The second pick was a different story. When the Los Angeles Lakers selected point guard DeAngelo Russell, the 76ers fans were not pleased. They booed lustily at missing out on the piece they thought Hinkie would select third. However, the Russell pick did mean Jahlil Okafor would be available.

Would Hinkie take another big man? Could he really trust the process this much to take the supposed best player available yet again even while it goes against roster building? Okafor is the best asset, but the team already has two centers and needs a point guard desperately.

Hinkie took Okafor…like he was going to do anything else. People are speculating that this means Philadelphia is going to trade Nerlens Noel somewhere to gather yet more assets. At what point does stockpiling assets stop helping though? Doesn’t the team need to begin to form a roster sometime soon? How long is the actual tanking portion of rebuilding supposed to last? Philadelphia is ripping up any trail that had been blazed in this area and writing a brand new outline.

The fans seem to have bought in, at least the ones represented at this draft party. Will season-ticket holders still buy in if Joel Embiid misses another year; if Dario Saric doesn’t come over to the US until 2017; if the team’s two best players, Okafor and Noel, can’t actually play at the same time?

It is fascinating what is going on with the 76ers. It was also comforting to know that the Philly fans still relate to the rest of the league even as their GM goes off-book. They all laughed heartily when the New York Knicks selected Kristaps Portzingis fourth overall.

I love the expression “trust the process,” as well as the follow-up “love the process.” Both are true, but as far as the 76ers’ process is concerned, it may have hit a breaking point. The 2015 NBA Draft could have validated the madness inherent in Philadelphia’s plan, but instead threw a massive wrench into the team’s equation. The Sixers had to take the best player available, even if it caused a mess.

There were three bona-fide studs in the 2015 NBA draft class, one being Jahlil Okafor. The Lakers selected the point guard stud that Philly wanted, leaving them with another center. Yet its very possible Noel can slide to power forward, putting both big men on the court at once.

Going big certainly goes against every current NBA trend, as the Warriors just won the title with a small lineup and lots of outside shooting. Yet I’m firmly in the camp that believes this trend can’t and won’t last. The NBA was built on its big men. They may have fallen out of style, but a team will soon prove their worth and that team can be the Sixers.

What Philly needs to now accomplish, one way or another, is adding a notable point guard to compliment its bigger lineup. Considering the extent of their tanking of late, they have the assets to accomplish this.

I think the tanking is at an end. It has to be. Fans can only take so much losing. Just look at the Knicks who kinda sorta tanked this past season, only to select a player that has potential, but no one has heard of. Their fans are angry and rightfully so. Philly fans can’t exactly complain, unless the process continues to fail. That only has one logical conclusion. The firing of GM Sam Hinkie.