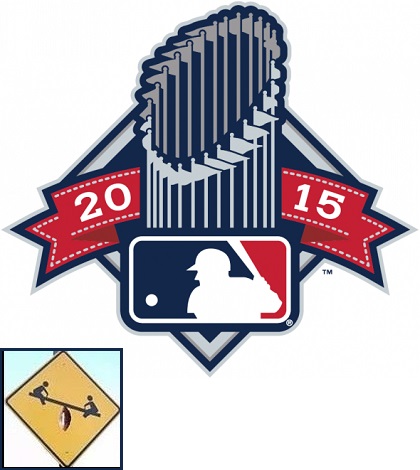 The 2015 MLB Playoffs have a historic Final Four, yet the World Series is destined to fall short of these incredible LCS series. One tortured fanbase is winning big and no one saw it coming. Seesaw Sports debate, where Dan Salem and Todd Salem throw down on the NFL, MLB, NBA, and more, only on BuzzChomp. Two brothers from New York yell, scream, and debate sports.

Just before each championship series started, the odds to win the World Series were as follows:

Those odds seem to have followed suit, despite every series being so close in the previous round. Every division series went the full five games except the one where the wildcard team advanced.

I still like the Cubs chances, having picked the NL wildcard-round winner prior to the playoffs as the team I was keeping my eye on. The Mets are obviously playing their best baseball at the perfect time, with their offense finally catching up to their prolific pitching. On the AL side of things, these were the two best teams during the regular season and seem like the two best teams still.

Are you surprised at all by the final four we have? Just from a tortured fan base perspective, the Cubs-Mets matchup is rather historic. Is there any more tortured group than either Cubs fans or Mets fans? Cubs for obvious reasons; the Mets haven’t been good in a while, but even when they were good earlier this century, the team managed to choke away a couple of late-season leads in dramatic fashion.

We may have thrown Toronto into the discussion before this year just because it had had the longest playoff drought, but nothing demoralizing had been happening. The team was simply mediocre in the best division in baseball.

It is funny though how much of a “new-guard” vibe this final four is giving off, even if Kansas City made it to the World Series last year. None of the four has won a ring since Toronto’s title in the early 1990s. And that ’80s/early ’90s era was really the last time this batch of teams was good.

The NLCS is too close to call

The Final Four of the 2015 MLB Playoffs is excellent, but I can’t help but feel the air leaking from the balloon. It seems every season the two LCS matchups are tremendous, but the ultimate World Series matchup lacks luster. Perhaps it’s because there’s little rivalry between the final two teams. But when the Royals faced the Giants last season, it felt anticlimactic. I don’t see how this is avoidable this season.

Only one of our Final Four teams was anywhere near the World Series when I first looked out onto the 2015 MLB landscape. I figured Kansas City would be good. I also liked the Mets. But neither team jumped out at me. Same goes for Toronto and Chicago, whom many people thought should/could be good, but few actually saw it coming. This is why I love the two LCS matchups!

With the home team having won the first two games of both series, we now know just how even these clubs are. Game three is pivotal, for obvious reasons, but winning at home was crucial for both the Mets and Royals. In the two, three, two format the team with the better record instantly loses their advantage if they fail to win at home. Neither ball club lost their advantage.

So where does this leave us as fans? The best thing for baseball is for the Cubs to make the World Series, but having the Mets in there is an excellent consolation prize. My personal vote it that either team faces Kansas City. I’d love to see them reach back to back World Series, but ultimately I see them losing out to the National League representative. No matter who wins it all this season, an enormous parade will be in order and history will be made.