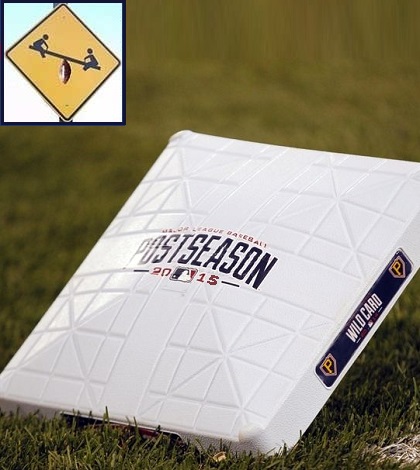 The four MLB Wildcard teams can each go all the way, but will they recreate last season’s World Series magic? It’s the Pirates vs Yankees to win it all, but the Cubs and Astros may play spoiler. 2015 MLB Playoff Predictions.

The Major League Baseball season has reached its epic conclusion. It took until the season’s final day to determine at least a couple of the playoff spots. Now we have our postseason matchups all set and are ready for the wildcard round beginning Tuesday. Wooo!

In the wildcard, the New York Yankees will play the Houston Astros in the American League on Tuesday and the Chicago Cubs will play the Pittsburgh Pirates in the National League on Wednesday. In the AL matchup, both teams enter the playoffs sputtering and limping. The NL teams are conversely two of the best teams in all of baseball and have been for much of the season.

ALSO ON BUZZCHOMP: Who wins Manager of the Year in NL and AL?

It’s impossible to predict a single matchup like these, but my question is more big-picture. What are the chance any of these four squads win the World Series a la last year’s wildcard club, the San Francisco Giants?

Obviously any of the four have a shot; they’re in the playoffs after all. That’s all it took last year for the Giants and the Royals to make their respective runs. This year, it seems like a similar long shot for at least the AL clubs.

The Yankees have the bullpen to rival what Kansas City created last year, but they don’t run or defend or do the little things well like that Royals club. Their starting pitching has also looked very poor for some time now. The same goes for Houston. If the home runs aren’t being clobbered, neither club has a chance, and that means the World Series chances are slim.

In the NL, both the Cubs and Pirates would be favorites if they were out of the wildcard game. But this forces each to lose their best arm to start the following series. Is that enough of a loss? I don’t think so. I actually still like these two as the best teams in the league.

The best team according to record, the Cardinals, are banged up. The Mets and Dodgers have few reliable bats. The wildcard clubs actually seem like the most well-rounded options in the NL. If forced to pick a side, either the division winners or the wildcards, to win the pennant, I’d obviously take the former. But with some sort of odds, I’d lean towards the latter in the senior circuit.

Despite the strong finishes in the NL and the abhorrent finishes in the AL, both 2015 MLB Wildcard matchups are tremendous. Any of the four teams could win this year’s World Series, let alone make a run to baseball’s final round of play. Similar to the success Kansas City and San Francisco found last season, our four Wildcard teams have all the right stuff to defeat their division winning competition.

Playoff baseball comes down to lights out starting pitching, and a dominating bullpen. Its simple really, prevent the other team from scoring and you will likely win. With the stakes high, and emotions running even higher, a team’s offense needs to see the calm, cool dominance of its starter in order to relax and get clutch hits. A team needs to see its bullpen hold a lead, or shutdown the opposition in order for them to have a shot at a comeback. The combination of the two allows an offense to rise up, and wildcard teams to make deep postseason runs.

Now that I’ve fully explained what you already knew, which of our four wildcard teams has the best shot at winning the World Series? Can I pick two teams? Hell yes I can! Its going to be a Wild World Series.

Throw away the final month of baseball. Toss it out the window and forget it ever existed. The playoffs have begun and every single team is reveling in their accomplishment, ready to play another day. This is most prevalent in the American League, with the New York Yankees. They are primed to make a run at their 28th World Series, with the single game against Houston as their biggest road block.

Don’t get me wrong, I love what the Astros have done this season. Their best pitcher has been kryptonite for New York, but the Yankees have all the pieces for playoff dominance. The bullpen is rock solid. The starting pitching can be shutdown, and must be in order for them to go the distance. Sure, New York’s starters have not played well of late. But with short memories, and the return of their hot bats, this Yankees club can win it all.

Over in the National League I like the Pirates chances to capture the pennant and play in the World Series. My heart is with the Cubs, buy my eyes tell me Pittsburgh is the most complete baseball team. They can run the gauntlet into the World Series.

Will it be the New York Yankees versus the Pittsburgh Pirates for a truly wild championship round of baseball? The way this MLB season went, it’s the most likely scenario. Pitching wins championships.

More Sports:Who wins Manager of the Year in NL and AL?