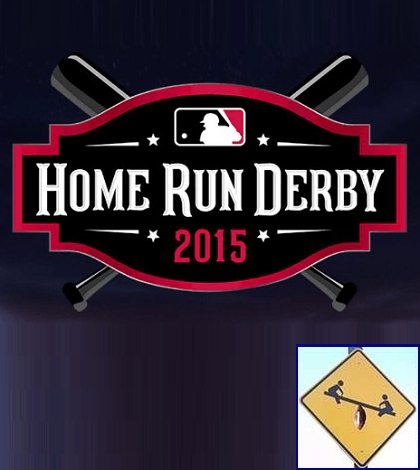 The home run gets a splash of March Madness, as the 2015 Home Run Derby debuts a flashy new format. Winning is still everything, but can the young studs take down the future hall of famers? Home Run Derby Predictions all over. MLB debate.

You may be right about the American League coming out victorious in the 2015 All-Star game. I like everything on the AL roster better except for the starting lineups.

The pitching, both starters and relievers, is superb for the AL. The National League is loaded with a few great starters, but the depth of the AL is superior. The power off the bench for the AL, as you noted, is also something that should come into play. I’d feel better about the AL’s victory if Miguel Cabrera was going to play, but the NL will be without Giancarlo Stanton to somewhat balance out the holes.

Those two would also have been great Home Run Derby participants, but nevertheless, the Derby grabbed a pretty great slate this year. We have the old guard in Albert Pujols and Prince Fielder, the middle guard in Todd Frazier and Josh Donaldson, and perhaps the best young guard we could have hoped for outside of Mike Trout and Bryce Harper: Joc Pederson, Kris Bryant, Anthony Rizzo and Manny Machado.

The head-to-head battles make the Derby more intriguing this year, and I have no idea what to expect from the timed-rounds aspect. Will players rush to hit as many balls as possible? Will the pitchers make a huge difference in saving seconds? Will batters even wait for balls to reach the outfield before teeing up another? The player who wins could be the one who simply plays to the rules the best.

In round one, the matchups are as follows: Pujols vs. Bryant, Pederson vs. Machado, Frazier vs. Fielder, and Donaldson vs. Rizzo.

I like the Frazier/Fielder winner to advance to the finals and almost feel the same way about the Pujols/Bryant winner. The problem is I don’t know who to pick in either one of those matchups. Do you have a strong feeling on this? It’s always hard to predict which guys will thrive and which will fold in this atmosphere. It’s even harder this season because no one has ever done this format.

If I had to pick, give me Pujols vs. Frazier in the finals with Frazier winning in front of his home crowd. Good thing I don’t have to pick though!

I’m proud of you for sort of picking a winner, despite the fact that you skirted filling out your entire Home Run Derby bracket. That’s like only picking the championship game in March Madness. Ridiculous! What about the first round upsets?

This is going to be much closer than the seeds would suggest. The timing element takes some getting used to and Pujols barely squeaks out a round one victory with only two more homers than Bryant.

The Dodger steps up and bullies Mr. Machado in this matchup. Pederson wins handily. Too bad the homers don’t carry over into the next round. He’ll need them.

This is going to upset the hometown fans, but I’m picking the upset baby! Fielder overtakes Frazier in the final seconds of his first five minutes at the plate.

Donaldson eliminates the other Chicago Cub, taking down Rizzo by only a single home run. The major takeaway after one round of the new format, timing is literally everything. The more swings you can get, the more homers you can hit. Speed baby. Speed.

In a battle of Los Angeles, I like Pujols of the Angels to defeat Pederson of the Dodgers. Maybe its just a desire to relive the glory days of one of baseball’s greatest players, but I too can’t help but pick Pujols in the finals.

The Blue Jays may not be living up to expectations yet again this season, but Donaldson seizes the spotlight for himself and his team in the home run derby. He defeats the new fan favorite, eliminating the Prince and heading into the finals.

It’s the one seed versus the three seed, a solid showing by the top contenders in the competition. Ultimately youth wins out in a derby defined by endurance and bat speed. Josh Donaldson defeats Albert Pujols for the 2015 Home Run Derby crown.