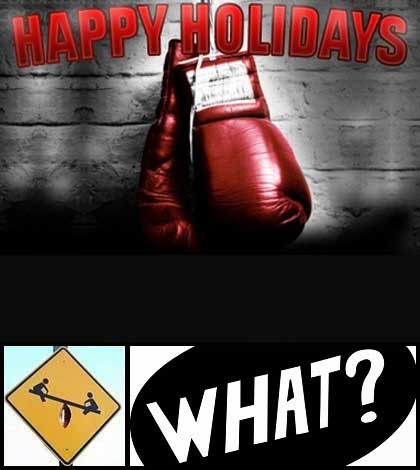 Our celebration of the 2015 Holidays continues with Sports Quotes Game round two! Boxing anyone? Someone famous said something profound. But who? Its our Holiday 2015 edition of “They said what?” sports quote game.

The Rules at Seesaw Sports are simple:
Player 1 presents Player 2 with a sports quote.

I see your holiday season quote and raise you a boxing season quote. The movie Creed just came out and it’s been getting some faux Oscar buzz. I can’t tell if people actually think it’s that good or just want to make sure viewers realize it isn’t as bad as the previous Rocky iterations were. Either way, here is your boxing quote that has nothing to do with the Rocky movie franchise.

I was going to go with this hilarious quote about George Foreman (“I’ve seen George Foreman shadow boxing, and the shadow won.”), but it seemed too obvious Muhammad Ali said it even without hints. So I’ve dug a bit deeper.

“Boxing is a sport. We allow each other to hit each other, but I’m not treating my opponent like my enemy. We’re doing a job to entertain people.”

Hint one: This level-headed sentiment was said by a boxer who is still alive.

Hint two: He has been on television and is well-known outside of the ring.

Hint three: He was never heavyweight champion of the world.

If I was at all a fan of the sport of boxing, this would likely be an easy quote. Yet you’ve once again preyed upon my weakness, tossing up fat quote for me to swing and miss upon.

Before I read any of your hints, my initial guess was Evander Holyfield. It just felt like something he would say, having gone through the trials and tribulations associated with fighting Mike Tyson and getting his ear bitten off. However, I do believe Mr. Holyfield was heavyweight champion at one point or another. I also do not consider him to be known outside of the ring.

This brings me back to your initial quote, which you scrapped for lack of difficulty. It would seem to me that George Foreman fits all three hints, and this is certainly something he would say. The answer is George Foreman, the grillmaster himself.

I suppose I may have unintentionally tricked you with that lead-in, but that would have been very ballsy of me to include a reference to the answer a sentence above the quote. I don’t have the guts to do that. George Foreman is not the correct answer here.

The answer is Manny Pacquiao, the actor, singer and Philippine House of Representatives member himself.

Very tricky, but well done. I would never have thought of Manny Pacquiao outside of the ring. A singer, really? And a politician? Well now I’ve heard everything.