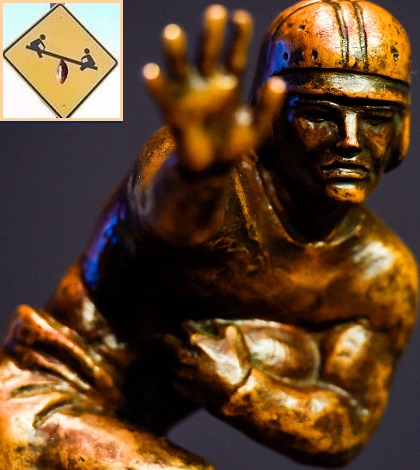 Just like the college football rankings, the top five candidates to win the 2015 Heisman Trophy represent a moment in time. Its a crapshoot right now! As more games are played and players prove themselves superior, current favorites lose out. Sorry Clemson, but you can’t do enough to win your quarterback this honor.

Clemson quarterback Deshaun Watson’s numbers are great. His team is great. I’m just not sure he’s actually the greatest collegiate player this season. This comes down to what you want to accomplish with the Heisman Trophy. Sure, quarterbacks have won it most of the time, but that isn’t a hard and fast rule. Sure, the leader of a winning team always has the edge, but that too isn’t required. I know the Heisman can’t be treated like an MLB MVP award by just giving it to the player who has had the most valuable season because everyone’s schedule is so vastly different. The award winner has to have balance between the two.

In some ways, I see the Heisman mirroring the College Football Playoff committee ranking. As the year progresses we will see changes at the top, not because the current leader faltered, but because a challenger did something to pass them.

Case in point, the Clemson Tigers are number one in the latest committee rankings. However, with a weak slate of games remaining and the weakest challenger due in their conference championship game of any of the playoff contenders, I can foresee a scenario in which Clemson never loses this season but drops from number one. If, for example, Alabama wins out, the Crimson Tide will have a better overall resume than Clemson even if the latter wins out as well.

This is always explained by the committee. The rankings are how things stand at this very moment; if the season ended today, this is how the standings would look. Once new info is provided, standings are updated. Win-and-you’re-in no longer exists. Having to knock off the leader no longer exists.

The same goes for the Heisman. “…unless Clemson falls, it will be hard to take the trophy away from its man under center,” is what you said earlier. I feel like Watson could finish out the year strong and never lose but someone else will appear more impressive because of what they traverse from here on out. That goes for Derrick Henry, Ezekiel Elliot, Baker Mayfield and some of the longer shots as well. Heck, if Navy quarterback Keenan Reynolds runs his Minutemen through Houston and Temple to win the conference, maybe he’s the most valuable player in the country. After all, Navy’s only loss all year is to Notre Dame.

In the past in college football, it’s always been implied that rankings are current but also looking ahead while looking behind. In other words, rankings did a poor job of actually ranking teams that exact week. The landscape seems to be changing in that regard. Award season may follow suit.

You’re no fun at all. You’ve made such an excellent counter point in regards to the future Heisman Trophy winner, that by not picking a winner, you’ve in fact proven yourself right. Damn you!

The parallels between the evolution of college football rankings and the biggest postseason award are impossible to argue against. Rankings have evolved to a better place where their actual significance can only be found in the exact moment they are made. As soon as more games are played, the old rankings don’t matter. The weekly rankings are for the media and the fans. The final rankings are what truly matter, determining the four playoff teams and those participating in bowl games. I can’t disagree, the Heisman Trophy is no different.

At this moment in time Clemson’s quarterback is the front-runner. But all of that can change once more games are played. Its small sample size versus a full season’s worth of game tape. But unlike the rankings, we can’t pick a Heisman winner this week because no player has truly distanced himself. No one has stood up and shown the world that he is the BEST player in college football. All we have right now are a lot of excellent seasons.

History tells us a quarterback is more than likely to win the Heisman. But if one of our running backs helps his team win out and reach the playoffs final four, then all bets are off. For the 2015 college football season I have a hard time awarding the Heisman to a player whose team does not make the playoff. No one has been that dominant, and team success goes a long way towards winning.

Let’s call this debate a draw. Its like pulling teeth sometimes to get you to make predictions, since you hate being wrong so much. But your gold standard for how things now work is proving itself accurate. Well said.