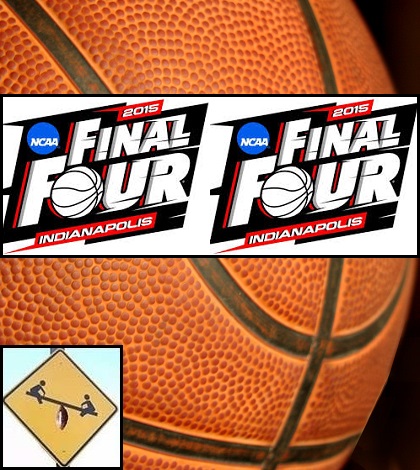 Immortality meets a field of top competition as March Madness gets underway. But first 2015 Final Four predictions, where Wildcats reign supreme. Which ones? Now that’s debatable.

The four number one seeds in our brackets for March Madness 2015 are monsters, but the twos nearly eclipse them. Two seeded Arizona won their conference tournament, and Gonzaga and Virginia are both coming off strong seasons.

Notre Dame’s tournament success makes Kentucky’s Midwest bracket the most challenging of the four. In order to go undefeated, the Wildcats will have to defeat either Notre Dame or Kansas.

On the flip side is the West bracket, which feels completely up for grabs. I admire what Wisconsin accomplished to claim a number one seed, but Arizona and UNC scare me just as much. I think the Tar Heels can take down the Badgers, yet the Pac 12 champion wins out in the end.

I really like the Wildcats in 2015. I’d go as far as to say the Wildcats will win the NCAA championship. I’m talking about Kentucky. They become the first undefeated men’s college basketball team since Indiana in 1976.

The Wildcats are certainly the favorites to win the NCAA tournament. There is no denying that. And it’s pretty funny that there are three top teams all named Wildcats this year. To be honest, in your projected Final Four, you made the wrong choice. When faced with three groups of cats, wouldn’t the dog (Gonzaga Bulldogs) come out victorious?

But anyway, the real key here is picking a champion and working backward. If I was forced to pick one team to win it all, the choice would obviously be Kentucky. That isn’t breaking any ground to say. However, if forced to pick between Kentucky and the field? Well then, I’m taking everybody else! Because of that circular, silly, borderline corrupt logic, I can’t select UK to win this tournament. I can however still pick the Wildcats.

My 2015 Final Four predictions are as follows:

UK and Zona are still my two favorites this year. In the East, I would like Virginia if Justin Anderson was healthy. Otherwise, this has been a different Cavaliers team. And Villanova has been stellar this season but lacks the go-to star of a Buddy Hield and Oklahoma. In the South, Southern Methodist is just a hunch. Duke is the favorite here with such a potent offense, but the Blue Devils struggle to stop people on the other end. And Gonzaga is large and fearsome but seems to come up small in tournament time. This is where SMU’s superbly efficient offense and shutdown scoring defense sneaks through to win the region.

In the end, I can’t pick against the Wildcats, but the Wildcats I like are out of Arizona. Zona is the only team (other than a healthy Virginia) with the defensive heroics to rival Kentucky. It also has the athletes and the size to somewhat rival UK. Picking against the 34-0 team is illogical. But picking one team against a field of 67 is also crazy. Give me the field, and out of that, I like Arizona.

More basketball: Why Kentucky must win it all