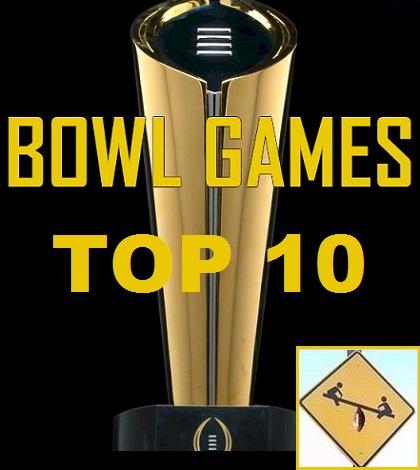 With 41 bowl games outside of the playoff, how do casual college football fans know what to watch? We rank the top ten 2015-16 bowl games from exciting to forgettable. Tis the season.

With the conclusion of the Army-Navy game this past Saturday, the college football regular season is officially over. For one thing, it means the NFL takes over Saturday football, but it also means we have entered bowl season for the NCAA games.

There are 41 bowl games this season. It’s…inexplicable. With the four-team playoff, exactly two of these bowl games matter because they are semifinal games. None of the other games matter in the least. I don’t even care who wins something like the Rose Bowl anymore if it’s not one of the playoff semifinals.

ALSO ON BUZZCHOMP: The Top Play of the 2015 College Football Season is…

With that said, some of the crappy, irrelevant bowls have awesome matchups. I’m going to throw out the top 10 non-playoff bowl games and want you to order them based on casual-observer interest. You aren’t a huge college football guy, so how does that fan feel about these games? I’m going to select the 10 so we’ll have some bias to begin with, but after that, it’s all you.

There are actually a couple more pretty good matches. Out of 41 contests, at least a dozen are bound to be good, but these are the 10 I’m giving you. Some of the games will reveal more information about who the best teams this year really were. Others should just be super exciting. The order qualifications are open for interpretation.

It’s hard to believe the number of bowl games has swelled to 41 this season. All monetary compensations aside, there is little honor in being awarded a bowl game, outside of the two playoff contests. Yet our top ten games are all excellent, so something in this crazy system is working right.

For casual fans like me, the top ten 2015-16 bowl games come down to two things: how well did your season go, and does your school bring history to the table? Football is all well and good, but with a million movies on television, the matchup has to mean something. Out of the ten you mentioned, all bring juice, but only my top five truly scream must-watch football.

Counting down from ten to one, starting with the least fan friendly bowl game:

Setting aside the bowl names, which we’ll get into on Friday, I’m most excited for Notre Dame versus Ohio State. This is pretty obvious, but the defending national champions against the most fan friendly team in college football is great television. I love watching Notre Dame, and they barely missed the playoff this season. So did Ohio State, making this an excellent football game and its own ‘championship’ of sorts for those teams on the outside looking in.

After the Fiesta Bowl I headed straight towards which team us casual fans would rather watch. Michigan and Florida present two teams with excellent history, and dynamic head coaches. Just behind that is the intrigue at USC. Call me a Los Angeles homer, but its fun to watch the Trojans. Their matchup with Wisconsin is excellent. You know who else is fun to watch? Both Oregon and TCU play fast paced, fun football. The Alamo Bowl is going to be a high-flying shootout and I love it!

The Rose Bowl slots in at number five, with Stanford rolling in after an exceptional season that just fell short. Iowa can make a similar claim, yet I don’t personally care about watching them play. Their success pushed this game farther up my ranks. I gave a nod to the Russell Athletic Bowl as well, because of how strong North Carolina and Baylor were this season. Otherwise, I’d much rather watch UCLA play Nebraska. The Bruins are on the up and up, while Nebraska is classic mid-western football at its best. The Peach Bowl and Las Vegas Bowl would have been more exciting a couple of months ago, but now feel second fiddle to the remainder of the top ten. The only game that truly fell beneath was Auburn against Memphis. Its true this is a great matchup on paper, but I’m not excited about either school facing off in the Birmingham Bowl.

There you have it; tune in for the Fiesta Bowl and Citrus Bowl. Then dive into the Holiday, Alamo, and Rose Bowls. Casual fans may only catch five bowl games, so pick wisely and remember who’s worth watching.