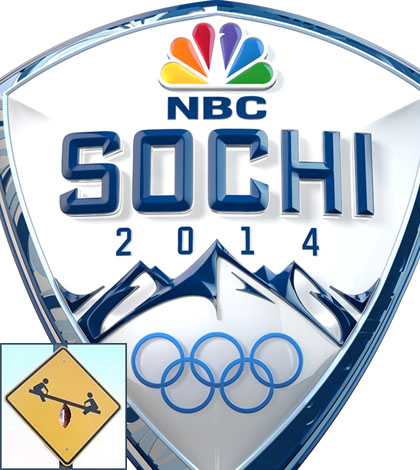 What excites me most about the Olympics? I already do moguls well, so scratch that one off the list.

I think I could ski the 2 mile downhill course, although my time might be around 15 minutes rather than 2 minutes. I would want to try ski jumping though. Just the thought of soaring through the air for such a great distance seems majestic and awesome. It’s also better than the halfpipe or slopestyle courses too because I wouldn’t have to worry about spinning and flipping for a score; just float to victory.

And land. Landing is important.

I’ve watched a bit of the speed skating and figure skating. It seems like it would be cool to be able to skate so well, but I would have no interest in putting that skill to those ends.

When it comes down to it, isn’t watching the Olympics (either winter or summer) more fun when you just get a taste of something? No one likes to sit down and watch an entire event, qualifying rounds through the finals. Even snowboarding and skiing which, as you pointed out, are the best to watch, are not fun all the way through, especially women’s.

Poor scheduling job by NBC this year. There’s no way they should ever air a men’s slopestyle event before a women’s event. The men go down, pulling off triple corks and 1440’s. Then we see the women do a shaky 540 and swing their arms all the way to the landing and she qualifies for the finals immediately.

For events still to come, really the only thing on my agenda is to catch some of the hockey but, again, I don’t plan on watching an entire game at any point, let alone the entire tournament. That’s just the nature of the beast with Olympic sports. If the sport itself was good enough, it would be popular outside of the 4-year environment. It also isn’t helping that all of the results are shared online throughout the day, before the event in question is even shown on television. No wonder The Walking Dead crushed the Olympics in TV ratings the other night.

The Walking Dead crushed the Olympics because it is amazing. That had nothing to do with the Olympic TV product, nor NBC’s manner in airing the festivities and events.

I can’t take credit for my view point, as I heard Colin Cowherd wax poetic on the subject earlier this week, but I wholeheartedly agree that there is nothing wrong with the tape delay. You just said yourself that its not fun to sit and watch an entire Olympic event unfold. Its best served in bits and pieces, multiple servings from a sports buffet. Well NBC is attempting to provide just this to its viewing audience, editing down the long events, the boring parts, into a watchable show that could in fact be tolerated for the entire time. What you want is the Red Zone Channel equivalent of the Olympics. This would be the perfect thing to air on the NBC Sports network, boosting its ratings in the process, but NBC knows you will watch no matter how they air it or when.

Am I in the minority in wanting something different from the Olympics? I know they add new events every time and the whole thing is very serious for the athletes, but as you pointed out, none of these events are interesting outside of the Olympic games. Taking that as more or less a fact, the Olympics should really take a page from the X-games book and hype up the coolness factor by one hundred. One of the coolest X-game events is the snowmobile jumps. Why is that not an Olympic event? And they have the shooting event on cross country skiis, but why not let the snowboarders shoot things while going off jumps?

Its time to think outside the box and create some events that show new, unique skill sets. Its hard enough for all the countries around the equator to compete in the winter games, having no snow and all, so why not branch out and really make things interesting. Tubing? Snow ball fights? Tug of war? All of these things are fair game. A skill is a skill and I want to add a splash of color to the current black and white version of the games.

Of course the edited version is preferable, but the Red Zone comparison is only apt if, on the actual Red Zone station, they showed you all the touchdowns that you had already seen written about that morning.

I’m not sure about many things in life, but I can be sure that Finland would crush it in Olympic snowball fighting.