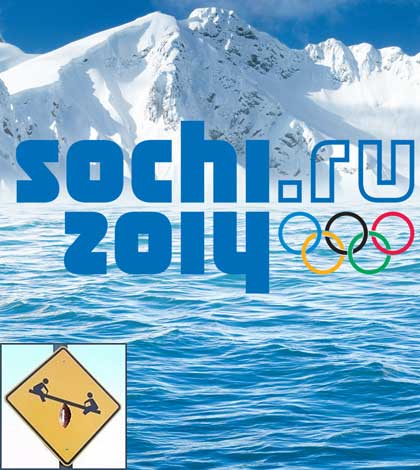 The opening ceremony was an elaborate, extravagant and over-the-top spectacle of…something. It was expensive and unnecessary, but really the entire Olympic games is that as well.

Every two years, the winter and summer Olympics are supposed to build the feeling of patriotism and joy for amateur athletics. It is a reason to watch athletes and sports you would never ordinarily care about or pay attention to. It does all of those things very well. There are very few things more exciting than watching a young athlete competing at the highest level for their country.

However, it seems to me that the Olympics does something more than build patriotism. It also destroys race relations. It encourages, nah Demands that you root against someone strictly based on their nationality. How is this a good thing?

How soon until the build-up of xenophobic feelings overwhelm us all and Jerry Rice and Deion Sanders are team captains, picking sides for the bipartisan Olympics?

Wow, you just took the Olympics to a very dark and despondent place. I’d like to first acknowledge that yes, the Olympics are an awesome thing for the world. It brings sports to the masses, universalizes people and is a great show of hard work, dedication, and competition. I love the snowboarding and skiing events personally.

As for your ridiculous accusation that the Olympics is ruining race relations, you are obviously confusing race with nationality. This is the root of the very problem you brought up, that people use race so arbitrarily that it has become a catch all for prejudice in general. There are lots of different types of people in the world and the Olympics strive to do just the opposite of what you said. Sure, we are rooting for America. But we root for America no matter the race of the athlete wearing our flag. And all athletes from all the countries involved are placed on an even playing field, to compete as equals for the world to watch. The entire world unites and you want to spin it as encouraging hate? Who are you? Haha.

I understand the point you’re making; we are growing as a society towards universal acceptance. Its unlikely we will ever get 100% there, but each step we make is important. And the Olympics only bolsters this. Every two years we are exposed to the greatness of other countries and their people. We may root against them, but its only a select few fans who wish harm upon the opponent. And those fans are not huge Olympics fans anyhow.

I’d also like to put to bed the idea of former star athletes drafting teams. This is great bar stool chatter, but the actual draft falls way short of expectation. Let’s get Shaun White and Bode Miller to draft Olympic squads. Woo! Now tell me who should be first pick? Do you have any idea? And should you draft a Curler over a Ski Jumper, or go all crazy and pick the Ice Dancer instead? This is a ridiculous conversation.

What excites you most about the Olympics? I know there is at least one event you wish you could do well.