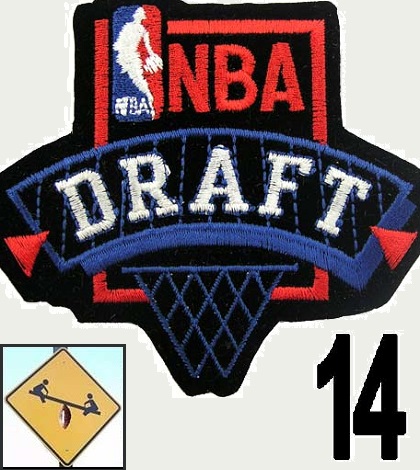 The 2014 NBA draft is this week. For the span of months prior to, and during, this past college basketball season, the consensus number one pick this June was going to be Canadian Andrew Wiggins, or Ender Wiggins as no one calls him but they should.

That story line lasted through to the new year, until Wiggins’ Kansas teammate Joel Embiid began to emerge. From that point until about three days ago, there was no doubt in anyone’s mind that the first pick in the NBA draft would be spent on Joel Embiid.

He’s a seven-foot athlete who can run, jump and block shots like Serge Ibaka, but taller and with post-game potential.

A back issue held him out of the ’14 NCAA Tournament, but most scouts and analysts believed it wouldn’t be an issue come draft time.

They were sort of right. The back in and of itself was not going to prevent Embiid from being the draft’s top selection. However, just days ago, reports came out that Embiid had fractured his foot…at some point. He is going to miss four to six months recovering from surgery, and most mock drafts now have the Cleveland Cavaliers going in another direction with the top overall pick.

My question to you is not who should be selected first overall. I am having a harder time figuring out the mindset of NBA folk. This is the draft. Players are being selected in the hopes that they will be a franchise’s cornerstone for 10-12+ years.

So why, just days before the draft, would a player missing six months make a team pass on him for the next decade and a half?

The only logical explanation is that teams have now decided Embiid is an official injury risk, and he won’t be able to stay healthy in the league. People will bring up players like Greg Oden and Bill Walton when making this argument.

Last week, Joel Embiid was a super-sized Serge Ibaka, and this week he’s Greg Oden next generation. How quickly things change when organizations are supposed to be making a pick to impact their roster for years to come.

Wow, I never thought I’d see Greg Oden and Bill Walton in the same sentence. Their careers couldn’t be more different, even if both are known for being injured. I’m very torn on the mindset of NBA executives heading into the draft, which ultimately works against Joel Embiid. One injury is easily dismissed, but two are hard to ignore. However, you pointed to both Walton and Oden as examples of injury plagued careers. Bill Walton is in the basketball Hall of Fame, so no one will be complaining if Embiid is oft injured and a superstar hall of famer like Walton. Greg Oden is viewed as a bust, mainly because he was drafted beside Kevin Durant and has failed to meet any and all expectations. The likelihood of Embiid having a career like either man is small. Both are outliers, exceptions to the rule. Assuming his career is somewhere in the middle, what are NBA executives to do?

I’m putting on my GM hat and ignoring hopes and exceptions. Hope wants Embiid to be a franchise cornerstone for ten to twelve years. Hope wants him to be a superstar. But how many players can you honestly look at entering the NBA draft and say you KNOW they will be stars? There is maybe one guy a year, but more likely its one every two or three years. LeBron James was a given. Carmelo Anthony was a given. So was Kobe Bryant and Kevin Durant. We knew they would be good. Greatness was earned, but we KNEW they would be good. Not one of those players is a big man and history is certainly working against Embiid. As an NBA executive I am now officially concerned. I have to be. Ignore history and be doomed to repeat it.

I’m just going to say it right up front; I would not draft a 7 footer with the number one pick in today’s NBA. The fact that Embiid is now injured has no baring on that decision. I actually think a foot injury is insignificant. It will heal and he will play again with no negative repercussions. The back is more concerning, but its part of the deal with super tall athletes. I am NOT drafting a big man with a top five pick. A player missing six months doesn’t affect my selection, but the type of player he is certainly does. I want speed, shooting ability, and leadership from my top pick. I want the next Wade or Rondo or Westbrook. Those are the archetypes that rule in the NBA today.

[Part two – Did they really draft HIM?]