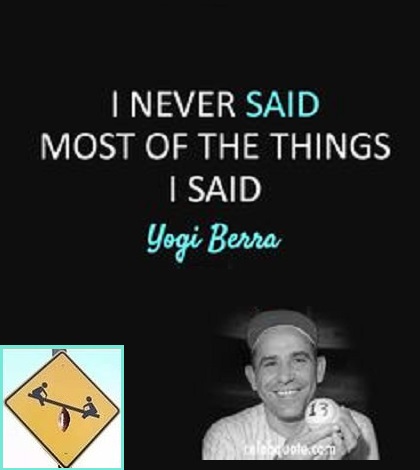 Yogi Berra quotes are the pinnacle of great sayings, so for our MLB Postseason edition of “They said what?” sports quote game we’re putting his words to the test. Did Yogi utter these words or not?

After 4 rounds, Todd and Dan are tied at 4 points. Will Yogi Berra level the playing field?
“They said what?”

Last month, Hall of Fame catcher Yogi Berra passed away at the age of 90. He was the ultimate quote machine, or at least became so with so many things having been attributed to him over the decades.

There may be no better encapsulation of our They Said What? game than Lawrence Berra. We would be remiss not to include him in some way. But it would be too easy to supply a Yogi quote and give clues hinting at the answer. His utterances were so singularly his…or were they??

Switching up the premise, I’m going to give you three quotes and you need to tell me which one Yogi is NOT attributed with saying. (It remains to be seen if he did indeed even say the things he’s credited with. We won’t cross that bridge here.)

Quote one: There comes a time in every man’s life and I’ve had many of them.

Quote two: You better cut the pizza in four pieces because I’m not hungry enough to eat six.

Quote three: In theory there is no difference between theory and practice. In practice there is.

So what’s it going to be? Can you pick the impostor quote?

This is a wonderful tribute to both Yogi Berra and sports quotes, as he’s been involved in some of the most infamous quotes of all time. These three sports quotes don’t actually refer to sports, necessarily. But I think I know which are Berra’s.

You tried to trick me with the pizza quote, but in all fairness to Berra’s brilliance, the impostor quote is Quote #3. It’s too logical, and too analytical to be from Berra. It’s also a completely accurate statement, which Yogi is not known for making. He trended more towards humor than anything else.

Quotes #1 and #2 both mix humor with life lessons. Those are Yogi quotes through and through. I too have had many times in my life. Furthermore, eating six pieces of pizza is just too much. Four is enough.

I think you may be giving Yogi too much credit (or not enough credit) for how he spun his yarns. They weren’t always strictly humor and didn’t always veer into nonsense, as evidenced by the fact that you are incorrect. Number three was said by Berra. So was the pizza quote as you assumed, because how could it not be!

The correct answer here, AKA the quote that Berra did not coin, is number one. That was said by longtime baseball manager Casey Stengel.