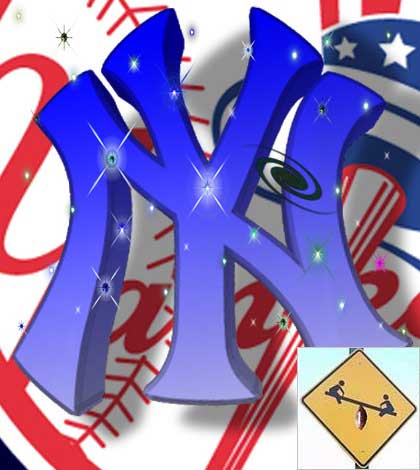 If ever a team had mojo, motivation, or whatever on their side, it’s this Yankees club. I realize that last season they fell short, playing for Mariano Rivera. But this is Derek Jeter, the captain, in his final season in pinstripes. If any player finds something extra when it matters most, its Jeter. He has a history of big hits in big games, finding a way to pull the Yankees back from the dead. Why not this year, in his final season?

You called the battered and broken Yankees’ pitching staff their strength. And that was not a jab at them by any means, but a credit to how well they’ve managed to play considering the circumstances. Four of their opening day starters are currently on the Disabled List. If only one of them comes back for September, that is a huge boost to a staff that is already performing at a high level.

Pitching wins in baseball, year after year after year. See the Detroit Tigers and San Francisco Giants for recent examples of pitching carrying a team in the postseason. And its the Yankees’ pitching that has carried them all season. That’s a good omen.

My hope is that the offense finds balance by season’s end. They have underperformed and underwhelmed all year, so the law of averages would have them playing significantly better to balance things out. This is another good omen for New York’s playoff hopes.

The Yankees are not one of the better teams in the American League, but none of that matters. All that matters are the final two months of the season. Let the past wash away. Derek Jeter has two more months of regular season baseball in order to end his career in the playoffs. Lets do this.

The Yankees pitching has been quite cheerfully odd. While Sabathia and Nova are officially done for the year, reports are coming out that Masahiro Tanaka threw for the first time in a long while and may be able to pitch in September. Also, Michael Pineda is scheduled to throw some rehab outings and could be back in the majors in late August. If either or both follow those time frames, it would be a huge boost physically, because they are better than whoever New York is trotting out to start, as well as mentally, feeding confidence to the other arms on this staff.

Of course, setbacks for both could be debilitating for the team’s psyche. We’ll have to wait and see.

As for the sputtering offense, you may be falling victim to the gambler’s fallacy. I agree that the team has underachieved thus far, but that has no bearing on them playing over their heads the rest of the way to balance out the season. The lineup should still be expected to hit their baseline figures in August and September, regardless of how poorly they looked in June and July.

I’m not going to do the exact math on this, but here’s the point. If Brian McCann was expected to bat, for example, .272 all year, he’s not going to hit .345 the rest of the way to bring his putrid season average up to something approaching that .272 to mark. He’ll probably just hit close to .272, meaning his final tallies will still look pretty poor.

The Jeter factor is interesting though. Do guys bring some extra oomf to get in the playoffs for Jete? I wouldn’t think mental edges like that would be impactful enough, but it’s possible. The true point of impact though is Jeter himself actually playing well for the first time in something like 18 months. Although the power is gone from his game, he’s been able to hit a little bit, get on base and steal bases at a high percentage, if not a high rate.

The team would obviously be better off if Stephen Drew played shortstop, but that isn’t happening. Considering the circumstances and how washed up The Captain has appeared, this is a solid compromise and a good way for him to finish his career. Now let’s just hope the Orioles and Blue Jays start to feel the heat, that playoff pressure that those organizations simply aren’t used to. Some autumn collapses may be in order.