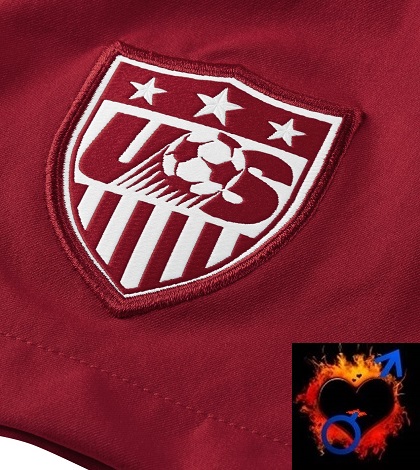 In honor of the USA vs. Ghana World Cup match, I decided like most Americans that I had to watch. If for no other reason, World Cup games are often very fun and this was team USA’s opening match.

Yes, drama is the only way to phrase it. Name another event in which complete strangers gather for viewing parties in massive areas? Like, I don’t know, Grant Park in Chicago, Illinois?

Who says the US doesn’t care for soccer? Well, the rest of the world, but they’re not ‘MERICA!

To make the game even more fun, I decided to e-mail my BuzzChomp colleague Dan Salem to see what he had to say. Specifically about the officiating, or lack there of.

Dan: If you’re putting the number of off sides calls at 3.5, then I’m actually going to take the under. If team USA is going to win then they’ll have to be more disciplined than that. Maybe two off sides for the match.

Doc: Do you even watch the World Cup? There are always blown calls and goals disallowed because the refs blow it. FIFA refs learned from infamous NBA ref Tim Donaghy how to referee. Basically, if the US wants to advance, they have to win this game. I doubt they will beat Germany and I expect Portugal to be a harder opponent than Ghana. This is the game they must win.

With that, Clint Dempsey, Michael Bradley, DeMarcus Beasley and goalie Tim Howard must be on their game. It is the old adage, your stars play like stars and your role players do crazy role player things, like solid defense and great offensive placement on set pieces. That’s how you’ll win more often than not.

Dan: Good old referee drama, haha.  I tend to agree with your pre-match thoughts. This is a key opportunity for the US to gain points. With Germany blowing out Portugal 4-0, the US can seize control of second in the group.

Doc: Germany dominated another European nation and the US can come in and seize control? That plot sounds familiar. I’m in.

The US has two starting players with dreadlocks; Jermaine Jones and Kyle Beckerman. I don’t know why, but I see this as a great omen, even if Beckerman looks pissed for missing Bonaroo to start in the World Cup.

1 min: The game starts and Dempsey scored after only 30 seconds on a great individual effort. I’m already thinking this may be too easy.

Scored in 30 seconds. Insert your own joke about that here.

11 min: First off sides call on Ghana. I only need a few more to win my bet with Dan. Wait, did I actually bet anything?

15 min: Howard beats Ghana’s Asamoah Gyan to the ball inside the penalty box. It summed up the first fifteen minutes of play. Ghana is doing everything right and controlling the flow of the game, but the US made that one play to bail them out of a jam. Interrupting crosses, stealing the ball, Howard snagging the ball. It’s not pretty, but so far it’s working.

18 min: I have no idea if that was a foul or off sides on Ghana. Jordan Ayew had possession and didn’t appear to foul anyone to get around a defender with the ball. I’m clueless. Somewhere Tim Donaghy is smiling. Bad omen if you like evenly matched games. Great omen if you like ‘Merica.

20 min: Jozy Altidore is running for a long ball, grabs his hamstring and collapses. Oh, this can’t be good. There are about five soccer players in the world who, if they appear to be injured, probably are. They’re all on the US team, so it makes it convenient. Is it too soon to make a Landon Donovan could be a great substitution right now joke? You know you thought it too. So Aron Johansson comes in. I had to look him up. Remember when I said good omen? Forget it.

27 min: Vice President Joe Biden is in attendance. I really hope he has a Brazilian brothel scandal similar to Justin Bieber. That would just add to the US government mess over the past month.

32 min: Howard makes the best save all game for either goalie, a full dive to his right side. Then Dempsey is kicked in the face by Ghana’s John Boye while falling after missing a header. How this wasn’t a red or yellow card is beyond me. That’s FIFA officiating everyone, where consistency is for commies. Seriously, Dempsey has what appears to be a broken nose from BEING KICKED IN THE FACE.

This is what happens when a nose meets a professional soccer player’s cleat.

Rest of the first half: Ghana controlled the tempo and pace of the game, but the US defense kept forcing the ball to the outside and Howard’s play eliminated every scoring chance Ghana could muster. The US’s first corner kick was at the 45 minute mark. With that, Dempsey still was able to take advantage of the only opportunity the US offense had. And since Beasley grew a beard, he looks like DMX’s head on Dave Chappelle’s body.

I emailed Dan at the half as well. He couldn’t watch the game because he was working, or being responsible, or something else I don’t care for. This was his response. His email was basically what you just read in the previous paragraph.

Dan:  How many off sides for team USA so far? Based upon your omission, I’m guessing I’m on track to win the under. Score! I don’t like to hear that Ghana is dominating, but a lead is a lead.

He is right. No one complains about an ugly win. Also, the bet is on? I really should have bet something.

45 – 61 min: Basically a series of Ghana charges which either lead to a missed shot or a really bad shot. Ghana is playing like that guy at a bar with all the game in the world, but who can’t seal the deal and get the girl’s number. I somewhat feel bad, but then again I’m a proud ‘Merican. Excuse me while I pet my bald eagle.

62 min: Team USA’s first shot on net. Directly at the goalie. In baseball that’s called buzzard’s luck. When talking to women at bars, that’s when her boyfriend really cares for her, but he’s with his female friends tonight.

63 – 78 min: This sequence produced about five myocardial infarctions for myself (Do your own Googling). So many Ghana charges and set pieces which lead to either a missed shot or a Howard save. At this point Ghana is out shooting the US 17 – 6. That’s controlling the game if I ever heard it. Not only that, but they have clearly been the more physical team. Then again, is shoving soccer players out of the way something to praise?

79 min: The camera shows a Ghana fan who is a combo witch doctor/voodoo priest/soccer hooligan with a geisha colored face. Nothing good can come from this. Absolutely nothing. A witch doctor in Ghana claimed he was responsible for Portugal’s Christiano Ronaldo’s injured knee and no other medic can cure it except himself. Why is ESPN messing with these guys? Pan away. I only fear two things now, the IRS and Ghanan Witch Doctors.

Why ESPN. Why would you show a witch doctor after what happened with Ronaldo?

81 min: Ghana scores. Gee, who didn’t see that coming after the Witch Doctor put a curse through the ESPN cameras. The US was playing on their heels for most of the game, so this was bound to happen. Oh, thank you ESPN for showing that Witch Doctor/voodoo daddy man AGAIN.

83 min: Ghana missed another scoring chance. Gee, who thought scoring a tying goal with ten minutes left in a World Cup game would rejuvenate a squad? Aside from everyone? Ghana needs to do something stupid for the US to win this.

85 min: A Ghana defender body checked a US forward (I think it was Graham Zusi, but not positive. I was too busy thinking how stupid the defender was for body checking the American who touched the ball, which was going to be Ghana’s ball anyway.) and kicked the ball past the goal line to give the US a corner kick. US substitute Graham Zusi kicked a beautiful cross to another substitute John Anthony Brooks who headed a bouncing ball into the Ghana net for a 2-1 advantage. Simply put, ‘MERICA!!!!

Brooks (left) and his header caused an entire nation to yell loud, celebratory curses at the same time. ‘MERICA!!

88 min: Brooks makes a great defensive play with his head to deny the Ghana equalizer. I’d say this qualifies him to say he had a great four minutes of consecutive play so far.

90 min: Please let this game end. Ghana’s five off sides to one means I already won the over/under. Crap, I should have actually bet something besides my ego. Also, Ghana has dominated this game except in goals scored.

Finally: The US was out shot 21-8, Ghana controlled the ball for 60% of the game, and still the US found a way to win this. As ugly a win as this was, it’s how the US has to win games in this tournament. They don’t have the stars to score at will, or in a poetic manner like Holland or Germany. They have to be gritty. It’s the American way I guess. Regardless, the US will face tougher opposition against Portugal in their next game.

USA hangover vs. Portugal anger. Bring it on.