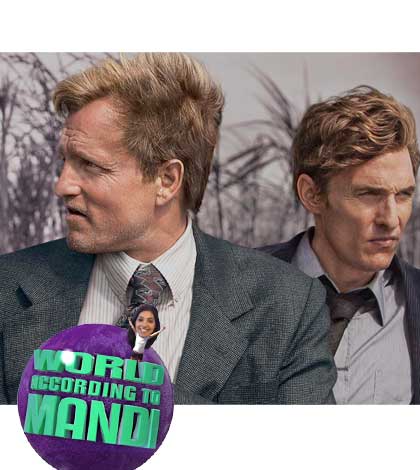 Let me preface by saying I’m behind by two episodes of HBO’s True Detective, but by no means does that make my opinion biased. This show is awesome! First, if you have not watched True Detective then get on it ASAP. What are you waiting for? I don’t want to hype the show too much, because hyping always leads to injustice and a lack of intrigue, but this is such a solid television show for two very basic reasons: the acting and the writing are outstanding.

Let’s start with the acting, something close to my heart. True Detective stars Matthew McConaughey and Woody Harrelson. Wow. These two phenomenal actors sold me before I even knew the premise of the show! Matthew McConaughey plays a deeply troubled detective named Rust Cohle, while Woody Harrelson plays a seemingly ‘normal’ detective named Martin Hart who of course is not.  The most fascinating part of these two characters is that the show follows their seventeen year hunt for a serial killer.  We see them when they’re still partners in the 1990’s as young, vibrant detectives battling with their demons. Then we get to spend time with them in the present day, no longer partners or detectives, and witness the dramatic shift in Rust Cohle. The dichotomy is stellar. Both Matthew and Woody are playing two very different versions of the same men.

The shift between the characters in True Detective is both unique and wonderful.  It’s rare that we as the viewer see where a character started and where they ultimately end up all within the first episode of a TV show. Heck, we rarely find this out in a show’s series finale, let alone the pilot. Sure, we don’t have the middle details of why, but it’s pretty evident that these two detectives went through a lot over seventeen years. Matthew McConaughey’s character shift is drastic.  When we first meet him he’s young, handsome, and battling some serious problems.  He’s keeping his alcoholism at bay, but all that’s gone in the present day. Now he’s a full-blown alcoholic, disheveled, aged, and even more jaded. The flip side is Woody Harrelson’s character shift. On the surface it’s less dramatic, but time will tell. When we first meet him he’s a family man, arrogant, and (semi-spoiler) cheating on his wife.  His marriage is falling apart, but we don’t yet know what’s become of it in the present day. My prediction, Martin has changed just as much as Rust over the seventeen years.

Now for the writing of the show which is fabulous.  It’s evident in every character, and what the actors have created, that an attention to detail was huge for the writing staff.  I’ve never watched a show like this before! We’re given so much information as the viewer and the story and the world has developed so nicely and precisely.  It’s really a thing of beauty.  True Detective is smart, giving you just enough information and moving the story along just enough to leave you wanting so much more! Nick Pizzolatto is the creator and writer, the man behind the truly engaging world and characters of True Detective.

True Detective is one of a kind.  The writing and acting create a uniquely dark and exhilarating world. If you haven’t watched the show, then binge watch it! Trust me. It’s a smart drama with complex characters that live in a messy world. Do yourself a favor and hop on this bandwagon!