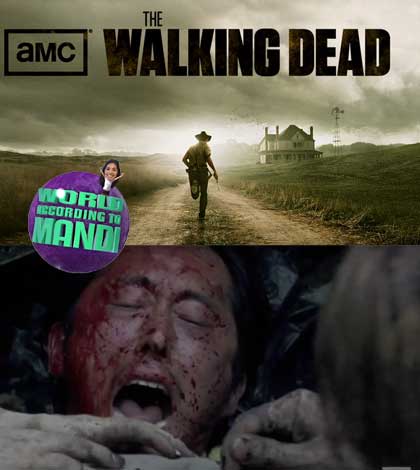 It’s Fangirl Friday video blog and it’s The Walking Dead edition. Check out my three reasons why Glenn is not dead!

I LOVE Glenn and I went to bed Sunday Night upset thinking he was eaten alive but then I started thinking about it. It did not makes sense to me. I know Glenn dies in the comics kids. I know he does but if Glenn is suppose to die I want it to be a meaningful death! He can’t die because Nicholas was a coward! He can’t die BECAUSE he had mercy for Nicholas and spared his life.

The angle too of the whole scene is weird! Nicholas is DEFINITELY the body that is beating eaten NOT Glenn’s. Now Glenn is covered in Nicholas’s blood and is invisible to the Walkers! He is not dead kids!

Next Post: The Walking Dead: Who Sounded the Horn? 3 Traitors Revealed

Happy Fangirl Friday! The Walking Dead – we know Glenn is not DEAD!