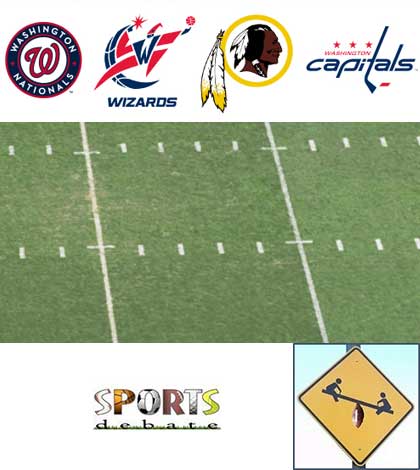 Ah, the quintessential pick-your-poison of sports fandom: would you rather be mediocre with tough playoff losses mixed in or bottom out with a chance to grab a generational player?

There are a couple different trains of thought in this hypothetical. It often depends on a team’s situation and even the sport in which it plays. For example, it seems obvious the rest of the Washington, D.C. teams are in better shape than the Redskins because they have had some recent success. I don’t think the way someone loses in the playoffs is ever a deterrent to making the playoffs in the first place. No matter how bad a postseason loss is, it still came during the postseason!

But the Capitals, Nationals and Wizards are all in superior positions to the Redskins because of recent success, but also because the Redskins play in the NFL. In the NFL, bottoming out to grab a top draft pick doesn’t happen because it doesn’t work. Unless a team can take a franchise quarterback, there is no top-five draft pick who would be worth tanking for, especially because an NFL team needs close to 50 usable parts and is never too far away from winning.

Wildcard teams win in all sports, but the NFL seems to generate the most out-of-nowhere winners. All the teams are so close in terms of talent. That is not the same situation as in other sports where bottoming out is often preferential to wallowing in mediocrity.

Case in point, would you rather be the Philadelphia 76ers or the Phoenix Suns? The former is a terrible basketball team because it wants to be. The latter has seemingly no chance of ever winning an NBA title with its current core and yet also has just a microscopic chance each year of drafting a game-changing talent.

I realize I didn’t even come close to picking a side in this ultimate sports debate topic, but that’s because it does depend on your situation.

As a city at large though, the answer is easy. You’d always rather have the competitive teams, the playoff teams. Rooting for a plan and long-term success might be fun logistically, but it is not fun for a city and for a fan base and for in-arena entertainment. DC is in okay shape with its recent stomach-punching losses because they came in the midst of postseason battles.

If you’re a sports fan, there’s only one side to pick. You want to see your team achieve, with a shot at the title. I’ve never gone into a season thinking my team didn’t have a chance to win it all.

DC sports are in a good place, with the Nationals dominant and the Wizards and Capitals in the thick of the playoffs. The Redskins are also one player away from elevating themselves into the NFL playoff discussion, and that player might already be on the team. A bounce back year from Robert Griffin III would flip this debate.

There’s no fun to be had from tanking in any sport. Although understandable in the final week of a season, there are too many other factors to consider. Its playoffs or bust as far as I’m concerned, so the fans in Washington DC can relax. There’s always next season.