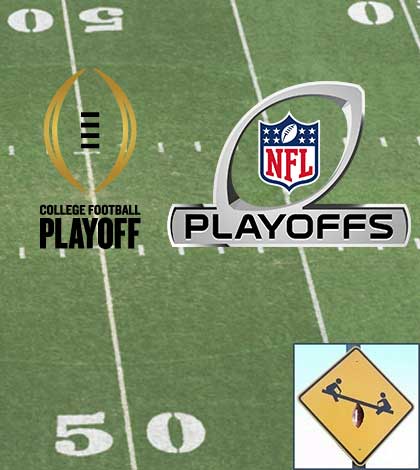 We knew the College Football Playoff prognostications week in and week out were going to be tiresome if not completely unbearable. In September and October you’re going to guess who the top four teams in January are going to be? Good luck with that.

But it seems the football gods decided to make the chore even more pointless than expected. If you had Mississippi State and Mississippi in your preseason projected playoff…don’t even go patting yourself on the butt just yet because either or probably both will end up losing a couple of times before the season is out.

In fact, other than those MS schools, the only other undefeateds (of the schools that matter; sorry Marshall) are Florida State, Baylor and Notre Dame, all of whom have looked super shaky in recent weeks. Baylor and ND especially could have/should have lost this past Saturday. Their undefeated resumes are hardly impenetrable.

I guess we kind of knew all this was going to happen, even if not to this scale. It should be less frustrating because it was so predictable, but it’s not. The constant playoff guesses, the upsets flipping the script and other upsets flipping things back; what’s really the point? What knowledge am I gaining by reading someone’s playoff picks on October 13 other than the knowledge that they’ll probably be wrong?

While the games on the field are super exciting, with Hail Mary endings and upsets abound, the overall outcome somehow seems less special. I don’t know why exactly. It’s almost as if the playoff now gives a buffer zone that didn’t used to exist. The losses by Oregon and Alabama and Oklahoma etc. the week before seemed demoralizing to those fan bases. But then UCLA lost (and lost again) and Auburn lost and TCU lost etc. and now OU and Bama and the Sooners aren’t out of anything.

We assumed the expansion of the championship from two contenders to four couldn’t possibly dilute the regular season. Well, it has, and in doing so regular-season wild weekends now have me saying, “alright..come on..get it together CFB,” rather than saying, “alright! Come on! Get it!”

Is this difference all in my head?

The difference is very real, but I’m not sure who you were talking to about the change from a BCS system of two teams to the four team playoff competition. Of course it was going to dilute the regular season!

I think dilute is a dirty word and probably doesn’t apply to college football. But since you used it, I’ll pull it forward into my point. It’s not that the games are diluted, it’s that the stakes are not as high anymore. The difference is in your head, but it’s also on paper, on the field, and permeating the entire landscape of the sport. One loss does not doom a season.

Because this is the inaugural year of the playoff system, we as college football fans are adjusting. And when I say adjusting, I mean coming to grips with the transformation from unique football product to NFL sub divisions of play. When a single loss doesn’t doom you, the season is now more like that of the National Football League. Sure it stings to lose, but other teams lose too, and in the end what matters is body of work. Not win and loss totals.

I hate to bring math into this debate, but when only two teams can finish on top, and when only one or two teams finish undefeated, it reasons that the undefeated teams will be on top and play for the title. That was the BCS. It was damn exciting, but did not come without its pitfalls.

Now four teams finish on top and enter the playoff, but only one or two teams will finish undefeated. Two losses probably doom your playoff hopes now, but one certainly will not. And most EVERY team ends up with a single loss. So that first one is ho-hum, but the second one, a la UCLA, hurts real bad, mainly for the local fan base.

Let’s return to your head, because no one really cares about a second loss outside of the local fans of a team. Undefeated teams are cool and fun to follow. No losses, wooo! But once a team falls their record is tarnished. So who cares if they lose again. Not until the final two weeks of the season will we care about these teams, mainly because if they lost once, why not a second or third time.

Our old way of thinking about college football will take a few seasons to deteriorate. In 2016 we may be going crazy about a second loss by a top tier team. But we may also not care. There’s something about being undefeated that rings true to all football fans. And when that goes away, so does the casual fan’s interest in said team.

I’m excited to see if Florida State can stay undefeated, but I don’t really care in Alabama losses again or not. The NFL-ization of college football has begun. Deal with it.