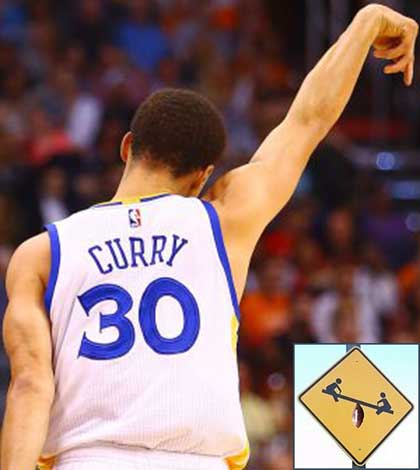 Stephen Curry has passed LeBron James as the best player in the NBA. His Golden State Warriors are on a mission, with Curry reigning shots all over everybody. Sorry not sorry LeBron, but you’re now number two. NBA debate.

The fact that dual winning and losing streaks exist in the NBA right now definitely makes this debate more interesting. Golden State obtained the record Tuesday night for the longest undefeated streak to begin a season in NBA history, but it didn’t seem that monumental. One, it came against the Los Angeles Lakers, so the outcome was never in doubt. Two, it’s almost a random streak, timing-wise at least. They still haven’t reached the longest ever winning streak. That has a ways to go.

But since it exists alongside the Philadelphia 76ers’ streak, it seems more interesting and noteworthy. The juxtaposition is intriguing. Speaking of juxtaposition, has Golden State’s Stephen Curry passed LeBron James as the best player in basketball for you? Curry’s numbers are insane right now, even after slightly cooling off from his gargantuan beginning to the year.

Curry is averaging 32.1 points per game, comfortably first in the league. He is grabbing 5.1 rebounds (as a point guard), 5.9 assists and 2.6 steals per game, the latter being the second-best mark in the NBA. His shooting splits have him well over the historic 50/40/90 greatness benchmark. Only six players in NBA history have finished in that club for a season.

Of course his three-point shooting is off the charts. At five made threes a game, Curry is more lethal in today’s NBA than some entire franchises are from beyond the arc. But then there’s LeBron. He is kind of just lurking. It’s amazing that the Cleveland Cavaliers are 11-3 and in first place in the Eastern Conference. They have hardly been in the news because of what Golden State has been doing.

James’ numbers are good, just not anything special or anything we aren’t already used to from him. Regular-season stats obviously don’t matter a great deal to LeBron in this instance anyway. The Cavs are prepping for a playoff run. Would you rather have James or Curry then at this point and moving forward? It’s hard to pass up on what the King was able to accomplish seemingly by himself in last year’s playoffs. It’s also hard to ignore what Curry is doing right now as a continuation from what he did a season ago.

The energy surrounding Stephen Curry and the Golden State Warriors is palpable and contagious. I’m easily taking Curry right now for this season and going forward. He is the BEST player in basketball in 2015. You touched on it Monday, but somehow Golden State won the NBA Title and came out the other end with a “Nobody Believes In Us” chip on their shoulder. Its unprecedented in professional sports. How could no one believe in the champion?

This brings us to LeBron James, the primary reason no one believes in Golden State. James will win a championship with the Cleveland Cavaliers. It’s a matter of when, not if, in my opinion. That being said, he is now second fiddle to the mastery that Curry is exhibiting in Northern California. His Warriors have turned the game on its head, and those stat lines you put down are nuts. Now in LeBron’s defense, he often starts seasons much slower than he finishes. It’s all about the playoffs, and the NBA season is certainly a marathon, not a sprint. But what Curry is doing is beyond any single season. Its All-time great and it deserves more attention.

You know what’s funny? The New England Patriots are also riding a huge chip on their shoulder, currently unbeaten as defending champions. They too have the best player in their sport. They too keep getting over looked because other teams have the stars, yet the league realizes that Tom Brady is the x-factor. It’s the same with Golden State. As long as Steph Curry is leading that team, they will be atop the Western Conference.

I’ll admit I too overlooked this Warriors team entering the season. I saw the flashy lights coming from the Los Angeles Clippers and Oklahoma City Thunder. I saw the veteran leadership and championship history oozing out of San Antonio. What I failed to see was just how exceptional Golden State is at playing its own brand of basketball. They don’t care about your game. They beat you with their style of play, because you can’t stop it. That’s dominance. That’s why Curry is the best player in the NBA in 2015.