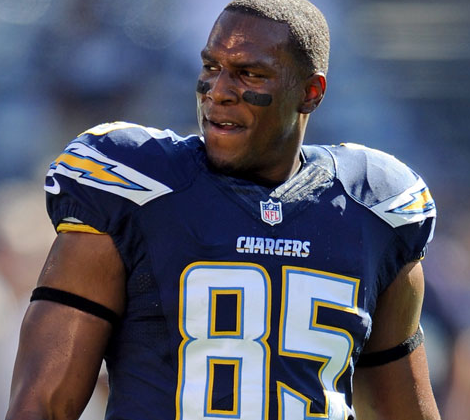 When Antonio Gates entered the NFL 12 years ago, the tight end position was a different animal. There were exceptions, but for the most part tight ends weren’t thought of as downfield weapons. Enter Gates, who became a receiving force with the San Diego Chargers from day one in the league. Now facing suspension to start 2015, will the Chargers be able to overcome his absence?

Antonio Gates produced sparingly in his rookie season (2003), but by year two he was one of the premiere receivers in the NFL, regardless of position. Gates caught 81 balls for 964 and 13 touchdowns that season. He had another monster year in 2005, his third season, topping 1,000 yards and scoring another nine touchdowns. Needless to say, he was quickly a linchpin of San Diego’s offense.

Gates paced the team by a mile in catches, yards, and receiving touchdowns in both ’04 and ’05. By the end of 2007, the Kent State product had tallied at least 900 yards and nine touchdowns in four consecutive seasons, while leading the San Diego Chargers in all three receiving categories every year.

ALSO ON BUZZCHOMP: NFL Preseason Storylines from the AFC

By 2006, the man throwing Gates the ball was Philip Rivers. The duo became a prolific pairing from get go, and Rivers began a string of nine straight seasons (which is still intact) of at least 3,000 yards passing and 20 touchdowns. Over those years, Gates accumulated a team-leading 7,560 yards and 74 touchdowns through the air. It wasn’t until Vincent Jackson arrived in 2008, that anyone on the roster even challenged Gates’ supremacy in the San Diego passing game.

Despite a few recent drops from his elite levels of production, Gates remains an upper-echelon tight end. He overcame reports of his early demise to the tune of two straight 800-yard seasons. He rebounded splendidly in 2014 by catching 12 touchdowns. Gates also thwarted the supposed takeover of the Chargers’ tight end position by Ladarius Green. Green, a talented athlete drafted in the fourth round of the 2012 draft, has been unable to garner significant playing time, let alone supplant Gates as the team’s best option at the position.

Because of his dominance, it was a huge disappointment for the Chargers and their fans when it was announced that Gates was facing a four game suspension to start the 2015 NFL season. Expectations ran high during the offseason for a team that should be battling for a division title, with Rivers still under contract to play quarterback. But now, instead of building excitement, a cloud of doubt fell over the team.

Antonio Gates is being suspended four games for violating the NFL’s Policy and Program for performance-enhancing substances. According to an official report, he blamed the positive result on “supplements and holistic medicines” he took to recover from a rough season. Regardless, the ramifications to San Diego are huge.

The Gates suspension leaves the Chargers scrambling, but they can overcome the loss. Green will now have to take on a larger role in the offense than he has previously qualified for. The rest of the skill players will have to step up as well. San Diego must rely on rookie running back Melvin Gordon, and scat back Danny Woodhead. Rookie sensation, and sophomore disappointment, Keenan Allen has to turn his career around fast in order to compensate. He topped 1,000 yards his first year, but fell back nearly 30 percent the following season, and saw his touchdown production cut in half. It will take a team effort, but San Diego has the playmakers to get it done.

The proposed top five receiving weapons the Chargers will utilize in 2015 (Allen, Malcom Floyd, Stevie Johnson, Green, and Woodhead) have played a combined 28 years in the NFL, yet have just 87 receiving touchdowns in total. Its time to step up. That’s fewer touchdowns than Gates himself has.

Can Rivers excel without his favorite target? Can the Chargers play enough defense to overcome what may be a sputtering offense? Can San Diego dig itself out of a hole, if the first month goes south?

The team’s first four games are against Detroit, at Cincinnati, at Minnesota. and against Cleveland. Those are all winnable games against quality opponents. It was not going to be easy for the Chargers in 2015, and this suspension makes it harder. But the Chargers have what it takes to win their first division title since 2009, Antonio Gates’ last season topping the 1,000 yard mark.