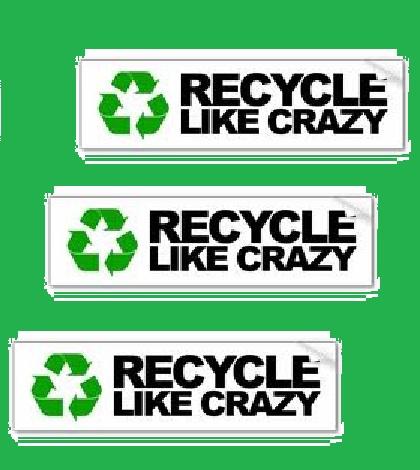 We’re still on the band wagon here that “It’s a new year, a new day, so let’s do things right!”  This is the only planet we got.  We have to make sure we treat it right! That’s right, I’m breaking out the clichés! Last week I read that Starbucks introduced a one dollar reusable cup.  Woo hoo, this is awesome! Those coffee travel mugs they sell are normally so damn expensive.  Not to mention that Starbucks already gives you a ten cent discount if you bring in your own mug! They have a corporate plan to have five percent of sales be reusable cups by 2015.  Love this.  Let’s reuse and recycle from now on!

I’ll be the first to admit I’m guilty of not always bringing my own cup to Starbucks.  But their reuse plan helps out a ton.  I mean, if I’m drinking straight coffee I try to remember my own cup.  But if I just spontaneously pop in, this lady does not carry a cup around with her.  Hot damn! I’ve failed at my recycling ways. I can change though!

Reuse is nothing new, but it’s coming back again!  I saw a Facebook post last week with over a thousand shares and a million likes that really came full circle.  The post noted that a young man was in a grocery store and an old woman was in front of him at the checkout.  The old woman did not bring her own reusable bag, for shame, and the young man criticized her for this.  At first I was like, damn straight bitch.  He claimed that we’re now cleaning up the mess of the generation’s prior.  I’m still on his side at this point.  The old woman listened and responded by explaining that back in her day there was no such thing as recycling.  The milk man came weekly and picked up her empty glass bottles and delivered fresh milk in cleaned out ones from last week (read recycled).  Her family line dried their clothes (read earth friendly) and they never ever left lights on when they went out (read super conscious of not wasting things).  Woo! Granny laid the smack down on that boy!

This old woman, genius! She pointed out our hypocrisy and mass consumer ways. We’re all guilty of contributing to the problem.  Even though I love Starbucks, it’s really easy to make your own morning cup of coffee, put it in a travel mug, save yourself four bucks and bring it to work!  How awesome would it be if every time you bought a bottle of milk you had to bring back the bottle from before?  Genius! Or if you don’t drink milk, orange juice then.  I love this recycling idea!

Every little bit counts! So I’m commending Starbucks for their efforts, but like most everything in life, we as people have to want to do our part too. We have to want to change our wasteful ways! Reuse and recycle people.  I’m going to bring my own coffee mug when I go out to get coffee. Take that society! I’m reusing and recycling.  Join me!