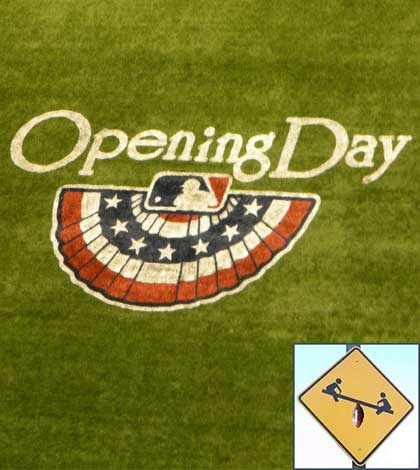 MLB opening day is finally here. Nestled in between an odd, Australian opening series for the Los Angeles Dodgers and the Arizona Diamondbacks and our New York Yankees’ first game on Tuesday, opening day is a beautiful thing in the sports world, even if it isn’t even quite the opening of anything.

There have been lots of injuries developing throughout spring training. The Yankees have also made tons of changes since last season. However, first things first, we need to get some predictions down on paper for the 2014 Major League Baseball season.

Let’s start with playoff picks and division winners. Here is who I have winning each division and advancing to the playoffs for each league.

NL East winner – I would have selected Atlanta, but I don’t know if they can overcome all of their starting pitcher injuries. Thus, almost by default, I have to go with the Washington Nationals.

NL Central winner – Give me the St. Louis Cardinals. They look like the league’s best team yet again.

NL West winner – I like the San Francisco Giants in a bit of a surprise over LA.

NL Wildcard winners – The Atlanta Braves still sneak in the playoffs, as do the Los Angeles Dodgers.

AL East winner – New York Yankees. Tampa Bay is the common pick here, but the Rays offense isn’t up to par. And New York may actually have the best starting rotation in the division if a couple arms pan out.

AL Central winner – The Detroit Tigers look like the class of this division for another season, both with the bats and on the mound.

AL West winner – In perhaps the tightest division race coming, I like the Texas Rangers to edge out a number of tough competitors.

AL Wildcard winners – Give the slots to the Boston Red Sox and the Cleveland Indians. I see the West being a bit overrated heading into the season. All of Texas, LA and Oakland are close, but none are as good as they’ve been in recent seasons.

Even with that extra wild card spot, it sure is amazing what squads will be left out of the playoffs. Of course, that’s what makes the regular season intriguing and worth following.

I don’t know who you’re kidding, there may have been one game over seas already, but ‘Opening Day’ is the beginning of something epic for baseball. In my eyes opening day is a weeklong celebration of baseball, spring, and the marathon race to a championship. Its not quite a holiday, but for baseball fans its pretty damn close.

In the NBA and NHL, opening week comes with a whimper, eclipsed by the meat of the football season. Week one in the NFL is special, but every week pretty much is with only sixteen games to play. Baseball is different and Opening day and the month of April are special. The season and its games get lost in June and July, but April has hope and a smile. By August and September half the league is playing meaningless baseball, but in April everyone is in the race. That being said, not every team has a shot at the post season. My picks are a bit bolder than yours, but the dominant teams remain. And away we go.

NL East winner – I like what the Nationals have put together, but unlike you I’m not forgetting Atlanta so easily. The Braves hold on to the East.

NL Central winner – The Pirates made huge strides last season and I like them to follow things up in 2014 with equal strength. Pittsburgh takes the Central.

NL Wildcard winners – I like the St. Louis Cardinals and New York Mets as the wildcards. Something about all that young pitching in NY makes me think they can overtake Washington and San Francisco for the final spot.

AL East winner – I like the New York Yankees. This division is so close top to bottom, but I agree, the Yankees rotation has finally filled out.

AL Central winner – I think the Detroit Tigers are a bit overrated, but I can’t ignore the facts. The team has stayed in tact and will win this division.

AL West winner – The Los Angeles Angels will win this tight division. They have too much power at the plate for Oakland and Texas to overcome.

AL Wildcard winners – This is really hard. The defending champs, the Boston Red Sox, will edge out Tampa Bay and Baltimore for a spot. And the Oakland A’s get the final wildcard.

It’s going to happen, there will be one surprise team in the playoffs this season. That team is the Mets for me, but the leagues seem more balanced than ever. There are a lot of strong squads heading into the year and no one from last season completely dropped off. And that’s what makes opening day so great!