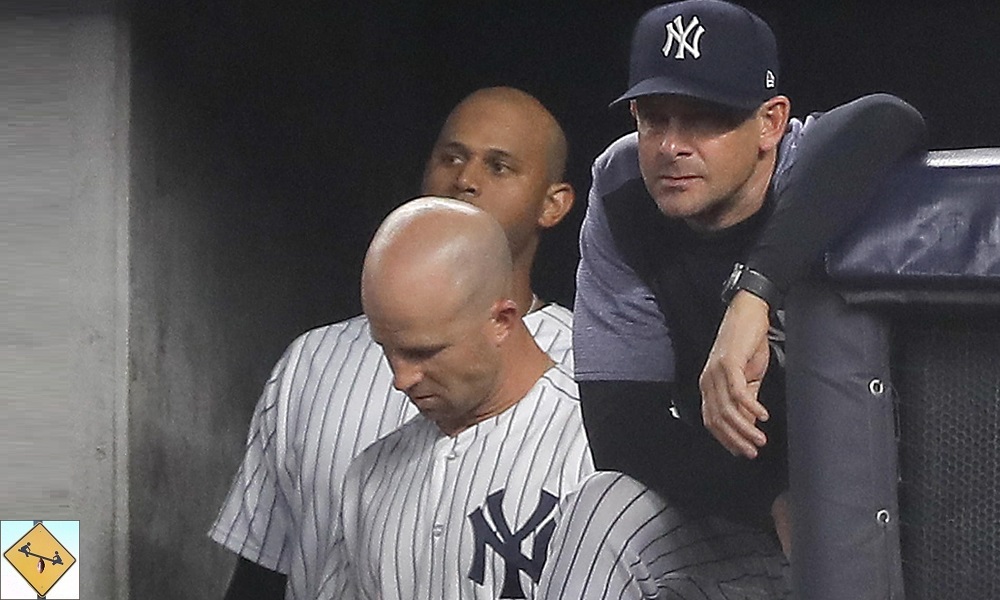 The New York Yankees met expectations with a 100 win season and postseason appearance, yet a bad taste remains in our mouths. Aaron Boone must be better and learn from his rookie mistakes.

With the ALCS underway between the Boston Red Sox and the Houston Astros, two disparate thoughts cross my mind. On the one hand, these teams – along with the New York Yankees – were the three best teams in baseball all year, so whichever squad ended up missing the league championship should not be disappointed. It was a toss-up of sorts. On the other hand, this Yankees’ season feels like a failure.

The fact that we lost in the ALDS probably has less of an impact on this opinion than examining how the team lost. Aaron Boone was soundly out-managed by his rookie counterpart, Alex Cora. Even though the latter had an inferior bullpen, Cora managed circles around Boone. The Yankees skipper left starters in too long, bungled pitching changes, and toyed with the lineup in the hopes of catching a spark that never came.

His most egregious moves took place in game three. He left Luis Severino out to dry. Then he inexplicably subbed in long man Lance Lynn to get out of a jam. Next he brought in Chad Green, after Lynn allowed all his inherited runners to score instead of vice versa, which wasted both arms and wasted Lynn for the latter stages of a blowout, where a long man would be necessary.

Even with Boone’s multiple trip-ups though, the team still got outplayed by Boston. The hitters didn’t come through outside of game two and the ninth inning of game four. The starters were outright terrible. While most of the bullpen arms were as good as advertised, they also weren’t put in position to help the team as much as they could have.

Perhaps Craig Counsell’s strategy in Milwaukee isn’t sustainable, but it is the blueprint the Yankees were hoping to follow. No Brewers starter pitched more than five innings in the LDS, yet they all turned the game over to the bullpen having allowed no runs. Avoiding facing a lineup for a third time is really only beneficial when the first two times through the order go well. That didn’t happen for New York.

That leaves the 100-win New York Yankees facing an early offseason. Management fired Joe Girardi after coming within one game of the World Series. It was a drastic step to take to replace the manager with a man better served with facing the media and relating to the young locker room. But Boone didn’t do well in what Girardi often did, even though the latter wasn’t a perfect game technician by any means.

Rookie managers are normally given longer leashes. They are expected to make mistakes. And even with his faults, Boone technically took the team from 91 wins to 100 wins. But it doesn’t feel like that improvement had anything to do with him. Instead, it was the inevitable jumps made by an incredibly young and talented roster. And when the manager did come into play in a major way – in a postseason series – Boone stumbled.

Everything you said is correct, but you cannot gloss over the fact that Boone is a rookie manager simply because his counterpart in Boston has performed better as a rookie. First time managers, much like players, make mistakes and ARE expected to make them. Sometimes a person like Cora gets seemingly everything right, or sometimes they get it wrong later. I won’t make this article about the Red Sox, as they are still playing. But there is certainly time for Cora to prove himself the rookie. This is what happened to Boone in the ALDS, but the New York Yankees themselves proved they were truly behind Boston, as the standings indicated all year.

This MLB season felt like a bit of an anomaly. There were a lot of 90+ win teams and a lot of very awful teams. This made the Yankees look A LOT better than they actually were, simply because they won 100 games. The Red Sox had a historic season for this very reason, and even the Seattle Mariners who had a negative point differential were in the playoff discussion in the AL. It was not a “normal” year in either league, but the MLB Playoffs proved that the New York Yankees were exactly the team we thought before the season began.

You and I wrote during spring training about how the Yankees were likely a solid offensive team with a good bullpen and suspect starting pitching. Their rookie manager was a wildcard, but they could make the playoffs if the pitching elevated itself. We failed to include the fact that the majority of the league would be pretty bad, because that’s hard to predict. I never imagined a 100 win season, but after making it to Game 7 of the ALCS, I did expect a playoff appearance. Getting back to the postseason exposed New York, because its competition was better and they showed their inexperience.

Back to Boone, who will only learn from this valuable playoff experience. He won a playoff game and got out-managed in his playoff series loss, by the Yankees’ arch rival no less. This is a building block season for a rookie manager. I did not expect him to be as good as Girardi at what Girardi was best at. A manager’s role in baseball games is often under appreciated, until its obvious that he or she is not doing as good a job as the competition. Boone did not manage his lineup or pitchers as well as he could have. The Yankees did not hit well against the Boston starters and New York’s pitchers gave up a ton of hits and runs. This was not a failed season, because the team grew immensely. Last year they overachieved. This year they lost to the league’s best club. If a championship is in the future for this New York Yankees team, it will be because they cut their teeth early and often.