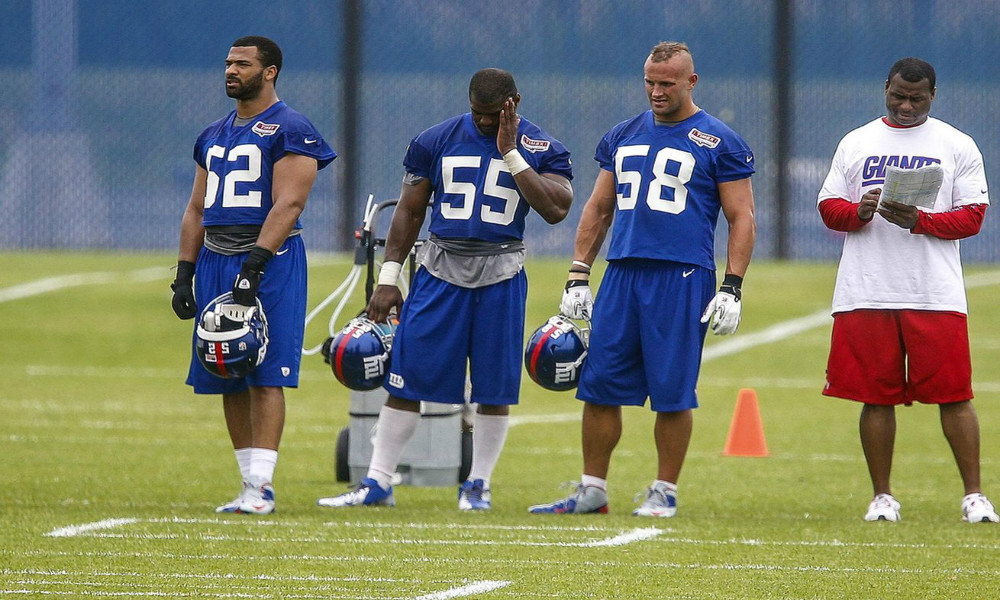 The New York Giants have a slew of linebackers at their disposal for the 2016 NFL season. None of them are stars; any of them could be starters. We handicap the bunch heading into training camp. (Photo Credit: bigblueview.com)

Through all the excitement and flowing money of the offseason, the one area of the New York Giants’ defense that was not really addressed was the linebacker corps. This was intentional. For years, New York has avoided spending big assets (whether in the form of high draft picks or large dollar amounts) on the position of linebacker. Like many teams around the league, the Giants always felt as though linebacker could be adequately filled by a “lesser” player for similar outcomes and fanfare. The Giants have stuck to this mantra more aggressively than most other teams, and it hasn’t really worked out. The Giant linebackers have been a real weakness that has taken away from the overall effectiveness of the defense. Nevertheless, management is not dissuaded from the plan.

Ironically, one of the real successes of this planning was when New York added Carolina linebacker Jon Beason for dirt cheap back in 2013. He played in 12 games and was a real plus for the unit. Unfortunately, this caused a great overreaction from the Giants organization. It assumed this would forever be Beason in a Giant uniform. He was signed to a large new contract and he promptly got hurt, never starting more than four games in any of the subsequent seasons before retiring.

ALSO ON BUZZCHOMP: NBC’s Powerless May Be Short On Power

The team’s plan worked perfectly in filling linebacker for cheap, but it then went away from that when it thought Beason was worth keeping around. New York has since spent some money on other backers, none of which have really panned out. It’s like the team is attempting to walk on both sides of the line, not wanting to spend for the best of the best at the position, while also being afraid to completely abandon it.

What’s left for the 2016 season is a mishmash of useful parts, bit players and huge question marks. We don’t even really know who is going to start, let alone who will be the unit’s best players this year. Here is a rundown of what the Giants have at the position and what direction they may go in.

J.T. Thomas is the most expensive player of the bunch. He was signed to a good size contract (three years, $10 million) before last season and didn’t really have an impact with the team in 2015. He will get the first crack at changing that in 2016 as it looks like Thomas will be one of the starting outside linebackers. Though there isn’t much backing him if he falters. Thomas has little history. His best year was as a reserve for the Jacksonville Jaguars where he made 84 total tackles and intercepted two passes.

Jonathan Casillas split time with Thomas on the weak side last season. He played more often on passing downs, both in coverage and rushing the passer.

Devon Kennard is the favorite to start on the strong side. His short career has already been saddled with injuries, but he remains the most intriguing of all the backers in terms of upside. He rushed the passer more than any other Giants linebacker last season. He also was used plenty on run downs. The strong side was essentially his until he couldn’t stay on the field. That could happen yet again in 2016, but Kennard will get his chance.

Kennard will be pushed by special-teamer Mark Herzlich and newcomer Kelvin Sheppard. Sheppard played on Miami each of the past two seasons and was a somewhat productive player.

On the inside, it is a toss-up of who will start between Keenan Robinson and Jasper Brinkley. Brinkley has the advantage because he was here last season, splitting time with Uani’ Unga, who is now gone. Brinkley played a lot on run downs and now will likely split time with the newly acquired Robinson. The latter came over from Washington where he was a part-time player. He brings a level of freshness and athleticism that the veteran Brinkley doesn’t have.

Then there’s also the newest linebacker: fourth-round rookie draft pick B.J. Goodson. His college scouting reports peg him as a player with toughness and intelligence who has explosive hands. He has a high upside in the middle, which is good for a team looking to shed the stopgap options it has employed for some time now, but by all accounts Goodson will need at least a year before he can be counted on as a starting-caliber middle linebacker. And that’s if he develops as the team hopes he will.

These eight guys are all going to play (assuming health). It may be a fool’s errand to attempt to pinpoint who is a starter, who is likely to get the majority of specific snaps, etc. The group is mostly interchangeable, which is good in terms of depth and bad in terms of star power. No linebacker on New York is going to challenge for a Pro Bowl in 2016; let’s put it that way. But maybe building this level of depth across the board is the smartest way to go when the team doesn’t wish to use its top picks and dollars on the position to begin with.