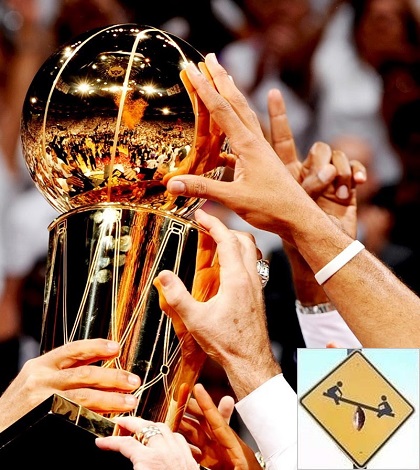 On Saturday, in the first game of the Eastern Conference first-round matchup between the Indiana Pacers and the Atlanta Hawks, Atlanta came out victorious by a score of 101 to 93.

It may be the single most inexplicable result in an NBA playoff game of our adult lives.

First, the Pacers are the top seed in the East. They were better than the Miami Heat and all other comers, cruising to 56 wins and home-court advantage through the conference finals.

Second, the Hawks are the eighth seed. In the NBA, it is so very rare that an eighth seed ever advances a round in the playoffs regardless of talent or matchup. The NBA has the fewest upsets and surprising outcomes of any of the major American sports, by far. Eighth seeds don’t advance.

Third, this Atlanta team ain’t no ordinary eighth seed. They are one of the most atrocious basketball teams to ever advance to the playoffs. With a 38-44 record on the year, the Hawks would have finished 11th in the Western Conference this season.

Factoring in that many of the bottom-dwellers of the league this season were not actively trying to win games, it is hard to fathom that a playoff team could have been so far under .500. As many as six possible opponents were not putting their best product or lineups out on the floor on a nightly basis.

This last point certainly played a part in Indiana accumulating 56 wins, especially with how poor they’ve looked recently, even prior to the playoffs getting under way.

Are the Pacers just an exception that proves the rule? The NBA is still as predictable as ever, right? Even if Indiana gets knocked out, they were just a mess of a roster at this point who were more in their heads than out on the floor. Or is something else at play here? Three road teams won game one on that first day of playoff games.

If the Pacers continue to run their season into the ground and lose to the Hawks, then yes, they will be the exception that proves the rule. I don’t think we are witnessing a wave of change in the NBA playoffs. Five teams ultimately won on the road in Game one. Yet only the Pacers’ loss really stands out. Victories by Portland in Houston, Washington in Chicago, Golden State in Los Angeles, and Brooklyn in Toronto were all wins between evenly matched teams. But that doesn’t change the structure of power between the teams seeded one to eight in the playoffs.

Game one of round one is probably the most unpredictable game in the first two playoff rounds. A team like the Pacers fell victim to season hangover, but should ultimately right the ship over the course of the seven game series. Witnessing them lose in round one would be unprecedented. One seeds don’t lose to eight seeds. The rule in the NBA Playoffs will hold court once again this season; top seeds advance. This is what’s predictable, not the quality of games or the matchups. I’d still be very surprised to see the Pacers, Rockets, and Clippers all fall. Brooklyn over Toronto feels much less of a shock.

Its fun to speculate about the top teams getting knocked off, but part of what makes the NBA playoffs great is that the best teams advance to play one another. I want to see the Pacers face the Heat in a later playoff round. Nothing against Atlanta, but they’re an eight seed for a reason and it makes them much less interesting. If a wave of change is upon us and a few lower seeds push past some “better” squads, ultimately we’ll end up with worse playoff matchups and a less interesting battle for the NBA title.

Did I miss something from the game ones? Will you be laughing at me later this week after the same road teams keep winning? I’m hoping not.