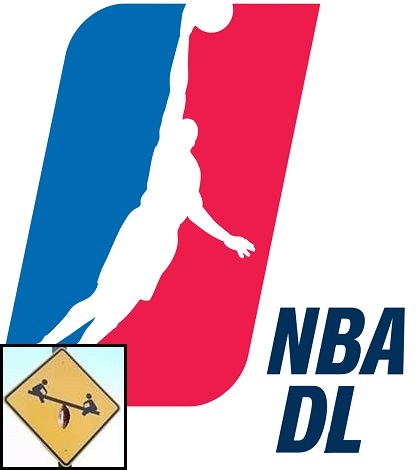 The NBA Draft is obviously top heavy, but it doesn’t have to be. Tanking occurs because player development is lacking, so why not utilize the NBA Developmental League a bit more? Each team is yet to have their own D-League affiliate, but those days are right around the corner. So why not have a normal NBA draft, but everyone selected has to play one season in the D-League? This could coincide with removing the current age restriction that the NBA has in place on draft-eligible players. So players out of high school (or college) enter the draft and get added to the D-League for a year of seasoning. This may encourage teams not to tank since anyone they pick will still be a year away. One year of tanking would then set your franchise back multiple seasons, rather than losing just the eighty two games.

Besides, the D-League has some real talent. In fact, it is filled with many old NCAA stars such as:

All three players are among the former college stars currently performing in the D-League. So while scouts and draft experts scoff at the usefulness of D-League stats, it seems only logical that incoming guys would be getting a better training here than in college. Everyone in the NBADL is a literal pro who’s already gone through the rigors of college ball. This arrangement would give raw prospects that extra learning time that many of them should be getting anyway.

I think the NBA D-League has real potential, yet the NBA can’t merely use it like a minor league farm system. That works in baseball, but is college baseball popular? Is minor league baseball popular? Both of those work because fans enjoy attending the games. The MLB minor leagues in particular offer a personal fan experience with way above average talent, many nearing pro level. The current NBA D-League isn’t set up this way and shouldn’t be used in a such a fashion. It won’t succeed as merely a farm system.

Go watch some D-League action on the Youtube channel (NBA D-League Channel). Those guys can ball. And that’s their selling point! You mentioned this, yet the execution was off. Fans would love to come watch high level basketball for half the price of an NBA game. Everyone gets a closer seat, floor level only, and have designated autograph times to make the players available. Unlike in minor league baseball, we as NBA D-League fans will actually know a lot of the players from their time in college. But the D-League can’t and won’t eclipse college basketball. Three things need to happen to create this fan focused experience.

Rename the D-League. Please; do it fast and do it now. What’s the second worst grade you can get in school? Its a D, and that’s what the league is called. It has an immediate association in our minds with failure. I realize this is a development league, but many great names come to mind that don’t include the letters C, D, or F. From here on out I’ll be referring to the NBA D-League as the NBAS (National Basketball Association Subdivision). It doesn’t matter what the S stands for really, as no one ever states the full name of the NBA itself.

We now have this super cool new NBAS, but instead of giving a team to every current NBA franchise, let’s instead give three teams to every division making eighteen teams total. There are currently seventeen D-League teams, so adding one more is pretty straight forward. The current NBA is already thriving because the star players are friends, having played in the Olympics and summer leagues together. In the new NBAS, all the draft picks from the teams in a division will head to that division’s three NBAS teams. Division rivalries will be reborn!

Finally, as you alluded to, the only way the NBAS actually aids the current NBA Draft and NBA is by requiring new players to enter the league. Yet I’m not on board with the one year requirement. Shouldn’t it be up to the teams and general managers to decide which players need development and time to grow into NBA level players? I’d edit your rule like this. Players coming out of high school must play either one year of college basketball, or one year in the NBAS. You can enter the draft out of high school, but you are still one year away from the NBA. The only players coming right out of high school are the super stars, raw talent. This gives them a year to develop against a higher caliber of player than in college. It would also lead to other players staying in college longer. Sure, the best guys probably won’t go, but the players outside the top ten of a draft can now stay in college longer to build a national audience for themselves to raise draft stock.