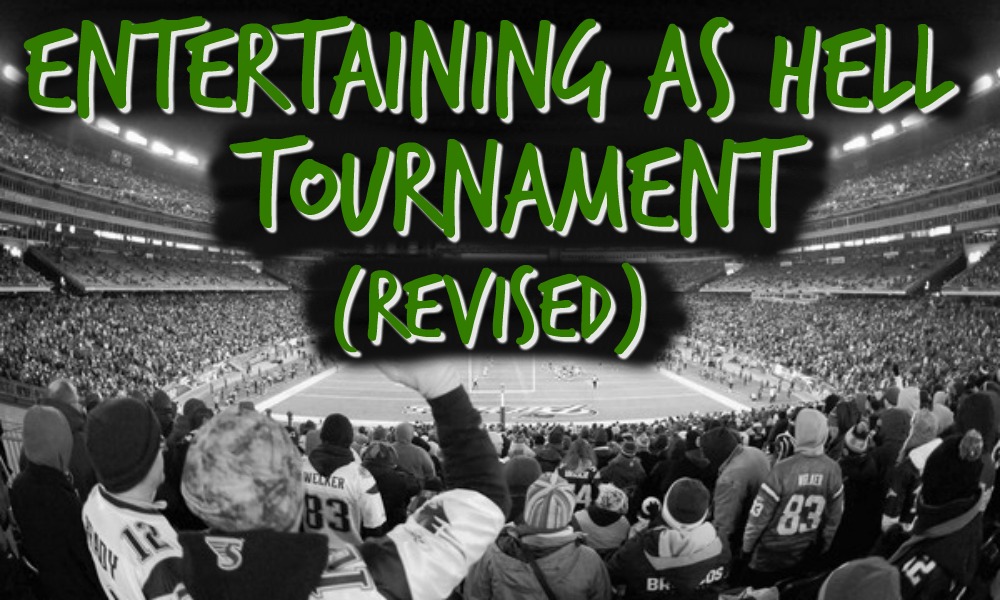 Bill Simmon’s devised an ‘Entertaining As Hell Tournament’ to combat NBA tanking, but the real answer lies in the postseason itself. Version two makes his tourny the first round and lights a fire under every sport’s playoff action!

If your biggest gripe with the NBA playoffs is the lackluster (read: crappy) first round, then what do you think of Bill Simmons’ old Entertaining As Hell Tournament idea? In a nutshell, Simmons says the top seven teams in each conference should make the playoffs. The final two postseason spots should then be determined by an “entertaining as hell tournament” between all the remaining teams. Whoever makes the “championship” of that tourney makes the playoffs as the eighth seeds.

It doesn’t solve everything; I’m not sure it actually solves anything. But the objective of adding excitement and intrigue into the end of the NBA season is accomplished. It would work if they shortened the regular season. The only consequence would be giving the top 14 teams in the league some extra rest, which is a quality bi-product of being good enough to avoid the tournament for the eighth seeds.

This would work in hockey as well. Of course, it wouldn’t fix the seeding issues the league has now because it doesn’t address those. Really, all this solves is adding value to late-season games that would otherwise be meaningless. And that’s not nothing! Each of the NBA and NHL have slogs of regular seasons where teams take games off, rest players for no apparent reason and generally go through the motions until outcomes matter more.

Cutting down on the amount of teams that actually make the postseason is a logical move to increase the importance of the regular season as well as the competitiveness of the postseason, but no one is doing that. In fact, each league seems to have constant talks about playoff expansion. The NFL and MLB are already 85 percent of the way to “just get in” being the only relevant note about the playoffs. Anyone can win the Super Bowl or World Series if they just get in. The NHL and certainly the NBA are not there yet; I’m not sure the NBA will ever get there because the best players have such a larger impact than in any other sport. But expanding the playoffs to add more undeserving teams just increases the chances of fluke winners.

Can we all just agree that college sports currently have the two best systems? The NCAA Tournament is the most exciting playoff format in American professional sports. The College Football Playoff is the most critical and rewarding playoff format in the country. No undeserving teams even get a chance at the latter. It’s all business and every game throughout the year is of the utmost importance.

The Entertaining As Hell Tournament probably doesn’t solve anything, but I like thoughts outside the box. Since no leagues are going to cut 20 percent of the regular season like they probably need to, new ways of thinking are needed to bolster the products we have.

I love the ‘Entertaining As Hell Tournament,’ but its initial incarnation does nothing to fix the playoffs. I think its time for a revision! Postseason competition is the ultimate reward for being better than half of your league, yet as fans we are left wondering if any of the early round matchups truly matter. The NFL has more exciting first round action because it gives the best teams a bye to start the playoffs. MLB has the most parity and because the season is so long, it feels like anyone’s game by the time the playoffs get going. But College Football and Basketball are the gold standard for playoff excitement.

Here’s what I propose:

Instead of playing out the ‘Entertaining As Hell Tournament’ to determine the final playoff teams, the eight seeds in basketball and hockey and the wildcard teams in football and baseball, I would suggest we make it the first round itself. The NCAA tournament is so exciting because its one and done. The same is true of the NFL playoffs and the MLB wildcard round. The College Football Playoff is so exclusive that every week of the season is nearly a one and done scenario. The ‘Entertaining As Hell Tournament’ version two (EAHT v2) gives the top two teams in each conference/league a first round bye and places everyone else in our ‘first round’ action.

The first round of the playoffs is our EAHT v2, meaning that every other team must win or go home in round one. The NFL playoffs are nearly this exact format, so I would add the tweak of one extra playoff team and one extra bye in each conference. Round one plays out until one team advances. The MLB playoffs have a one game wildcard right now, so in this new format we would add one more playoff team and have two games in our round one action. I’d also suggest this being double elimination among the four teams. They each play one another, with the two best teams moving on.

In the NBA the top two teams in each conference rest for round one, while everyone else must play in our tournament. I’m not sure double elimination would work as well, but I’d like to see it expand past a single game elimination if possible. The six teams play down to two, who each advance. The NHL would be nearly identical to basketball, as it also lets in eight teams per conference. What our new tournament does is reward the best teams in each sport, while upping the stakes on our first round of playoff action. Upsets will happen. Each game will feel immensely important. The winners move on in what amounts to an expanded playoffs with greater interest a la the NCAA tournament and College Football Playoff.

Simply calling round one an ‘Entertaining As Hell Tournament’ instantly makes me care more. Knowing its single elimination, or double elimination, makes it more exciting. Now I care about these games. Now I’m rooting for the upsets. Only the best teams get to sit out and wait to see who their opponents will be. Every other team must fight for the right to move on. Who’s starting the petition? Anyone friends with Bill Simmons?

More to Read: Yankees 2016 Season Already On the Line