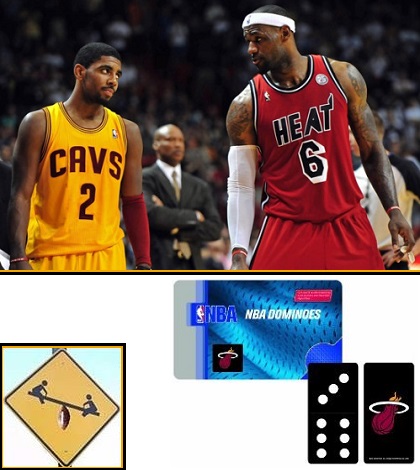 So much happened in the NBA this past weekend. The first move, the domino every other player and every GM was waiting for, was LeBron James’ decision to sign with the Cleveland Cavaliers.

After that transaction upset the balance of the entire universe, the other moves rolled in rapid fire throughout the weekend.

Carmelo Anthony signed with the Chicago Bulls obviously because that would certainly be the best basketball situation for him.

No wait, he re-signed with New York for the money.

Chris Bosh moved on to the Houston Rockets to create a Western Conference super team with James Harden and Dwight Howard.

No wait, he re-signed with the Heat for the money.

Thus, the Rockets matched the restricted free agency offer for Chandler Parsons to keep their team intact from last year.

No wait, they declined the option and let Parsons go to Dallas instead.

Pau Gasol also made a move within the West though, when he signed with the Thunder to fill their dire need in the front court.

No wait, he moved on to Chicago to come off the bench I suppose.

So okay, help me out here. LeBron James made the smartest move imaginable by going back home, to the better and younger roster. After that, everyone else shit the proverbial bed! What happened?

You forgot to mention the one blockbuster trade that went down! Jeremy Lin is no longer a Rocket, after being traded to the Los Angeles Lakers… Okay, I can see how that got overlooked. But what about Luol Deng going to Miami? That one at least deserves some honorable mention.

The LeBron decision was certainly the domino, but not for the reason that everyone thinks. You sarcastically mentioned it, but James set a precedence when it comes to money and nearly every other player was on board with the same philosophy. The LeBron announcement had to come first, so as not to overshadow anyone else’s decision. It gave everyone their moment in the sun, so to speak. But you bring up a wonderful point, what the hell happened? Has the NBA so completely shifted what sports are to its athletes?

Professional sports have always been businesses and its both a dream, career, and a job to the athletes involved. Getting your money is a career goal in football. You want that big contract after the rookie deal. In baseball you play for five years to sign that ten year whopper contract. But in basketball the money flows. It’s always been supply and demand. Big money has gone to nobodies and rookie contracts are quickly an afterthought to blossoming talent. So it made sense for stars to team up, and take a pay cut if necessary, to win a title. We can throw all that away now, though.

We now know what the NBA is. The NBA is a business incubator. LeBron James is a business. Carmelo Anthony is a business. So are Pau Gasol and Chris Bosh. These businesses grew and were nurtured by the NBA. And now they want to get their IPO (that’s a stock term where you enter the public market and usually the initial owners make bank). Who can blame them? The best way for the Carmelo Anthony business to grow is in a passionate basketball market that is also one of the largest TV and advertising markets in the country. Hello New York City, or rather, good to be back home. If this is today’s NBA, then all of the moves make sense from the player’s side of things.

We decided a week or so ago that the NBA was run by its star players. But if I’m a fan of the Thunder or Rockets, then I’m pissed this morning. Where was the fight? The Oklahoma City Thunder are one player (or coach?) away from an NBA title. And yet, with a bevy of veteran star players on the open market, they have signed no one. The Houston Rockets? Practically the same situation, except I tend to give their GM the benefit of the doubt. He’s earned it.

None of these moves make sense because the team’s that are one player away seemed to run crying to their mommies. They sat whimpering in the corner as the star players asked them to prove their worth. I’m amazed that they could not.

As a final thought, before we attempt to access the basketball ramifications, who do you think would have signed with the LA Clippers, if it were not for the awful Donald Sterling? That situation made every star with a shred of integrity say no thank you. They would have a gotten someone big.