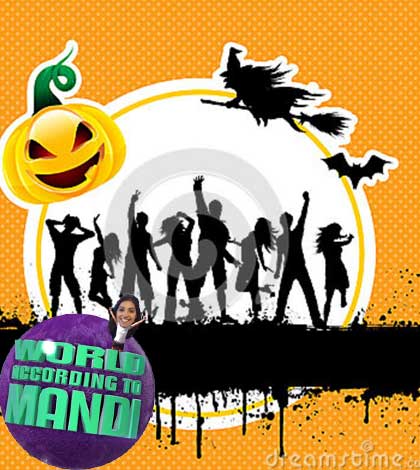 Woo for pumpkins, for witches and goblins and ghosts and ghouls! Halloween kicks off my favorite time of year. It’s the unofficial start to the holiday season and I’m a sucker for a kick ass, scary Halloween party where everyone and I mean everyone, dresses up in costumes. I’ve been a Nintendo Wii video game avatar, a roller-skating fairy, a white trash gangster and even Heidi from ‘The Hills.’ Love the couple costumes! Over the years I’ve been to some awesome Halloween parties and of course some so so ones too. Now let’s all picture the best, most rocking Halloween party. Was it one you were lucky enough to attend, or just a dream? My perfect party was real, I was there and it was amazing. But the dream version will be even better, modeled after the best Halloween party I’ve ever been to!

The best Halloween party ever happened on my very first Halloween in Los Angeles. My guy and I made costumes and they were killer; Team America World Police, complete with fake guns and the full body suits. America! We got invited to a party put on by Hollywood set designers, so expectations were running high and my anticipation was through the roof. Of course their house would be decked out! My first Halloween in Los Angeles, and one of my first LA parties, was going down as legend!

The ultimate Halloween party was in West Hollywood and was beyond fabulous! The entire backyard was done up to the nines with a monster maze. We ended up spending most of the night lost in the maze, bumping into Indiana Jones, the Mummy, Dracula, Spider Man, Hercules and on and on someone new in another crazy costume. These people went all out! It was by far the most decked out Halloween party I’ve ever been to.

Our dream party starts there, with a house stuffed to the brim with Halloween decorations, themed food and drink and a backyard monster maze. But this is our dream party so let’s push the limits people! We need a larger house and a huge backyard to pull off my Halloween Party. The maze has to be at least twice as big, with not two but four candy rooms! I’d of course decorate it up, enlisting ten good souls to help with streamers and black lights and piñatas. I’d spookify the hell out of the driveway and create my own haunted maze, hiring an actor to play Jason and chase people around with a chainsaw and machete. Costumes are of course mandatory and we’ll have prizes for the best costume, best couple costume, best group costume, most creative, most absurd, most ironic and one final prize for my favorite. It is my party, after all. Everyone has to vote! And since I love to make delish food, I’d cook for a week making amazing Halloween treats! Vegan options too. Oh, and let’s not forget the music. Creepy and amazing! There’d be a DJ and multiple dance floors spinning awesome tunes.

My dream Halloween party is bad ass! Good thing I got a taste of the real thing. I love Halloween and someday soon I’ll throw my dream party, a party to rival my very first Halloween in Los Angeles. My maze will be bigger! My music louder and my scare factor higher! Woo! Until then I’ll be attending the kick ass parties thrown by others. Once I figure out what I’m wearing. I still need a costume idea! Damn I love Halloween (creepy ghost noises flood the air as I cackle uncontrollably). Party time!