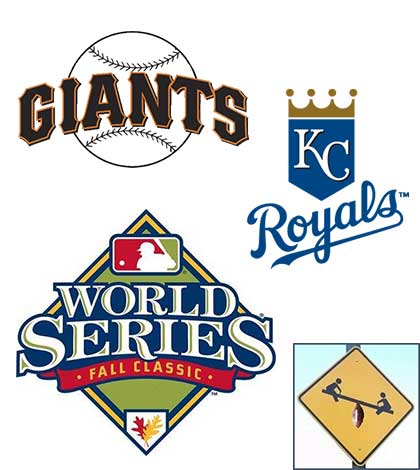 [Part one – The MLB World Series, Greatness or Random?]

After two games of the World Series, it seems even more clear to me that skill and performance have less to do with success than luck and timing. Also, I hope that everyone can finally come to grips with the fact that momentum doesn’t exist. Madison Bumgarner’s game-one performance was so inspiring, his teammates laid a collective goose egg on the mound in game two. Outside of Big Time Timmy Jim, no Giants pitcher even threw an inning unscathed after Jake Peavy started the unpleasantness in the sixth, and they used seven different guys!

Nevertheless, game two’s result made me even more interested in the rest of the series than I already was.

Ned Yost got the first managerial upper hand in the series by fortune of having a bullpen that frees him of making any managerial decisions at all. Once the move to take out his starter is decided, the rest is written in stone: Herrera to Davis to Holland. It is extraordinary in its simplicity.

As for Bruce Bochy, he lefty Peavy in too long, got no help from anyone he brought in, and any goodwill Tim Lincecum built up with his performance was rattled by him leaving the mound with an injury. As an odd chronology of events, every one of Bochy’s starting hitters got one hit, all nine. But no one managed two hits. They couldn’t mount any crooked numbers on the scoreboard. The skills and performance were there but the timing was not.

Game three Friday night moves to San Francisco. The Giants would ordinarily hold the edge, forcing an AL club to lose its everyday DH and play the National League game. However, Kansas City is barely AL in its maneuverings. Yost even mixes and matches pinch runners and defensive replacements through his American League games, let alone when he’ll have a pitcher to work around in the lineup. The Royals will lose Billy Butler, who went 2 for 3 and knocked in two runs in game two, but I am sure Yost will get him an at-bat at some point in the contest anyway.

I don’t believe in momentum, but I like what the Royals did in game two more than what San Francisco did in game one. The game one loss from KC’s perspective is easy to write off: lost to MadBum, no biggie, nothing to do about that. For the Giants in game two, it was a collective loss resulting from many failing pieces. That doesn’t bode well.

If we were sitting in the same room I would smack you. After 162 MLB regular season games and three playoff rounds for both the Royals and Giants, I think its pretty clear they both possess a ton of skill and performance. I’d harken to even call each team the best in their respective leagues, or at least the best right now. And isn’t that all that really matters in the post season? Who is the best now?

So if both teams are skilled and performing at a high level, then of course luck and timing will determine the victor. Both of us agreed to avoid picking a winner in this series, mainly because both the Royals and Giants are so damn even. Ones strength is balanced out by the others. Ones presumed weakness is easily matched by the others. We have two even teams battling for the title. There is really only one clear dividing line in the sand and you nailed it with that final statistic.

A team’s bullpen not only makes or breaks every single game, but as we’ve seen with the Royals this season and the Yankees with Mariano Rivera, can literally win for you. Being able to shut down the other team in the final three innings is more important than being able to score in 7th, 8th, and 9th. Only three runs allowed in nearly 30 postseason innings is incredible.

I absolutely LOVE this World Series, and its for none of the obvious reasons. I turned on the game last night and saw those blue and white uniforms representing the American League and it was wonderful to acknowledge that they belonged to the Royals. Living in LA I’m accustomed to the uniforms, almost always belonging to the Dodgers. Being a baseball fan, I’m also accustomed to teams not being the Royals representing the American League. As a fan of the New York Jets, it gives me hope. And as a fan of baseball its one of the best things that could happen to the sport.

We’ve seen how the NBA has flourished with the likes of San Antonio and Oklahoma City and Cleveland being dominant over the recent years. This phenomenon has also been present in football forever. But in baseball its more rare. Its something to be cherished. The seemingly perennial loser no longer being as such. Now don’t get me wrong, I would love for the Yankees to win every year. I’m a Yankees fan. But outside of that, this is great. Dynasties are fun, but unexpected playoff runs are more fun.

It’s why when the New York Giants beat the Patriots in the Super Bowl (both times), it was so mush sweeter than if the Patriots themselves had won. Surprise success always trumps a dynasty.

I’m not about to pick a winner, because knowing our track record this postseason it will only jinx my pick. But as the series shifts west, I’m psyched it’s tied at a game a piece.

[If you missed Part one – MLB World Series, Greatness or Random?]

Photo and Logos courtesy of www.USATODAY.com, and Major League Baseball