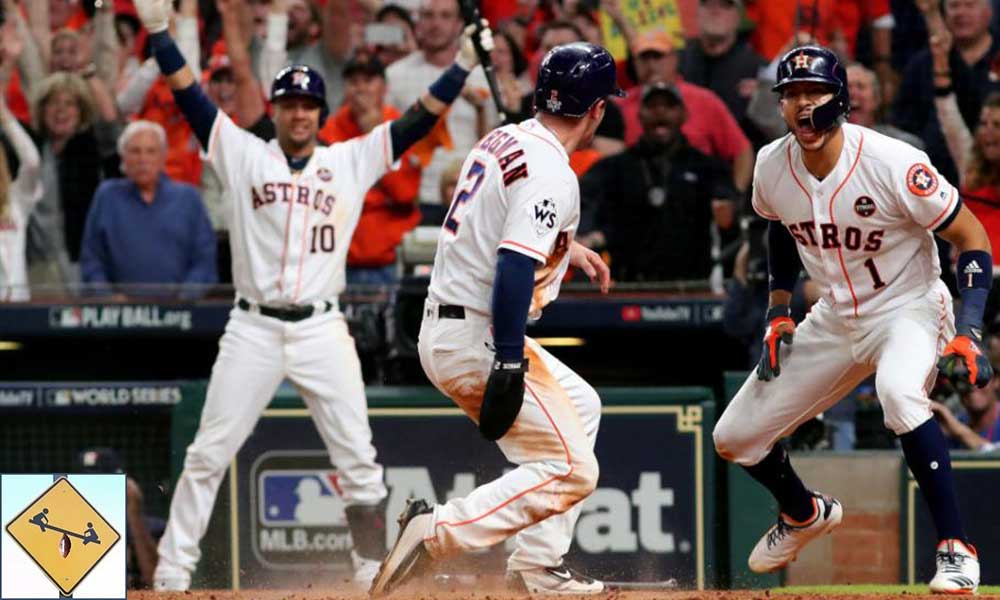 The Houston Astros proved that MLB tanking works, but is this actually a viable way to win a championship? Houston is the exception. They do not prove the rule.

The Houston Astros won the World Series. It took two game seven victories, but no one can take that away from them. But does it bother you that they horribly tanked for years, yet avoided the vitriol and malice that has been directed at tanking teams in other sports? Houston did a perfect encapsulation of the Philadelphia 76ers’ process, but no one hammered it. The franchise even released t-shirts years back that said “Process” on them. Seriously.

And it wasn’t just about being terrible and drafting high each season. That stuff doesn’t always work in baseball. I mean, it worked for Houston. The Astros drafted George Springer, Carlos Correa, and Alex Bregman with first-round selections. But they also missed on a number of top picks that were acquired through the MLB tanking years. The tank job, as Sam Miller discusses, also allowed Houston to do something more important: be insanely patient. The team was able to take on Rule 5 draft picks and keep them on the 40-man active roster because it wasn’t trying to win. It could give messy players years to develop. The timeline was such that a winning product didn’t matter as long as the guys got better.

ALSO ON BUZZCHOMP: MLB Changed the Baseballs, But Won’t Admit It

So each season from 2011 through 2014, the ‘Stros lost 106, 107, 111, and 92 games respectively. Yet only people inside baseball seemed to care. This didn’t garner headlines because the MLB draft never does. Grabbing top picks in this sport doesn’t matter as much or as obviously as it does in basketball. And the other stuff losing allowed Houston to do didn’t make headlines at all, because how could it? How could keeping Marwin Gonzalez on the 40-man make headlines? It’s not news.

For some reason, the sneakiness of this tank job bothers me more than Sam Hinkie’s Philadelphia project. I liked what Hinkie was doing. I thought it was bold and intelligent. What the Astros went through was not bold at all, yet it was just as intelligent. It’s hard to criticize constant losing in baseball because, as you see, even the worst teams win 50+ games every single season. When you think about it, that is a lot of games to win when you aren’t trying to win any. The Astros were purposely trying to be the worst team imaginable in those lean years and still, more than 50 days throughout the season, they went out and defeated the foe in front of them. How could that tank job make the news?!

I suppose this is just a case of basketball versus baseball. Baseball takes a long outlook and careful development. Basketball takes a few high draft picks in good drafts. Is that all that’s going on here? The 76ers process makes more sense and feels more logical because the draft pick compensation is so obvious. With Houston, there were many more steps behind the scenes. Maybe that makes what the Astros did more impressive. And obviously, they completed the task by going on to win the World Series. Trust the process indeed.

Sports Illustrated had a great feature on this subject in last week’s issue. The most important note would otherwise be an afterthought in this tanking discussion. Houston was the most profitable team in history in 2013, due to their bottoming out payroll ($22 million) and insane MLB revenue sharing profits. Not only did the Astros tank hard to acquire picks and build a championship team, but they made more money than any other team in any other sport while doing it. Talk about great business!

There are many ways to build a championship team, especially in baseball. A team must build through its farm system one way or another. Houston did a great job selecting talent with its high draft picks, but the public didn’t notice for several years because that’s how MLB works. Yet they did not become a World Series champion without other great moves along the way. The trades Houston made at the deadline this season pushed them over the top. Justin Verlander is one of the greatest pitchers of our generation and the Astros added him via trade. MLB Tanking alone is not enough to create a dominant winner, so I have to give Houston credit for using such methods initially and actually being able to follow through and finish the deal.

ALSO ON BUZZCHOMP: The Kevin Spacey Takes are Flying

Its funny, because the Astros were known as a very bad baseball team prior to the obvious stretch of tanking that took place. Multiple MLB teams are currently tanking, but we won’t know what kind of success they are having with it until another few seasons pass. As a fan its difficult to watch when your team is not fielding a winner, but not everyone can be the New York Yankees. They traded top players for prospects, while also doing a great job drafting talent. New York’s rebuilding season was actually its coming out party. That’s the exception. Every team has the ability to bottom out like Houston did. But most teams will not succeed at becoming a World Series champion. That too is the exception.

Several NFL teams are currently tanking, and one in particular has been tanking on and off for years. Sorry not sorry Cleveland. Only NBA teams seem to receive vitriol for such methods of madness. Intentionally losing in order to win takes a ton of confidence and assumes you will make all of the right decisions with the rewards reaped from your ineptitude. It’s either crazy genius, or pure stupidity. Houston was the lone genius amid a flurry of rather stupid tank jobs throughout sports. I’m hoping the success my New York Jets have had this season is another example of successful tanking, but only time will tell.