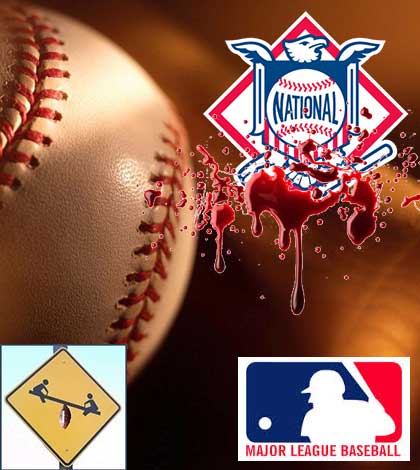 [Part one – MLB Halftime in the NL]

I see even more excitement in the NL as the summer winds down and the playoff races heat up. I’m hoping the AL remains competitive; this would mean the Yankees are in it. But in the National League I know things will be a dog fight. All three divisions are coming down to the final week and there will certainly be a wildcard play in game this season.

I liked the Braves before the year began, but I like Washington even more right now. I was unwilling to accept that they could be a consistently good team, but they’ve proven me wrong. When their offense heats up, and it will, they are going to blow teams away. They hang on to win the NL East, leaving Atlanta in a wildcard fight.

I’m standing by my pre-season prediction in the Central. The Pirates surge to win this division. At only two games out, as of yesterday, they are in position to rise to the top. This one is coming down to the final few games, with St. Louis and Milwaukee in it to the bitter end. Sorry Cincinnati, this is not your year.

The Dodgers win the west. San Francisco seems to have their number, but I do think that one big move happens in LA. They add or remove a puzzle piece to separate themselves from the Giants and win the division.

This leaves a dead heat for the two wildcard spots between four evenly matched teams. I see at least one play in game for the wildcard, but two are not out of the question. Ultimately Milwaukee and San Francisco will claim the two final playoff spots. A great season in Atlanta will fall short and St. Louis finally finds itself on the outside looking in.

With the non-waiver trade deadline now in our rear view mirror, it gives us a better overall picture of how the standings may shake out come October. We should feel much more comfortable in our Athletics and Tigers selections now, in reference to the AL and the major trades that went down. However, in regards to the National League, things still appear rather wide open.

The St. Louis Cardinals made a number of moves to improve their roster and really only parted with duplication, improving the overall quality of the depth on their team. If Yadier Molina comes back in August, I think the Cards slide past Milwaukee and win the Central title. They still have the most talent and most experience. That usually rises to the top after a set of 162 games.

In the East, Atlanta made a smallish move but addressed two team needs: a lefty reliever and a utility bat. They got both from the Chicago Cubs, but I still don’t think it’s enough to pass the Washington Nationals. I agree with you here that the Nats are simply better. It doesn’t help Atlanta’s cause that the Braves are really struggling to score runs or get on base…which are two semi-important facets of winning baseball games.

Out West, it just seems like Los Angeles is overwhelming the Giants with its glut of talent. Matt Kemp is (relatively) healthy and has been swinging the bat very well near the end of July. San Francisco’s only edge on LA would be in the pitching department, but since the Dodgers actually have the better pitching, there doesn’t remain much of a case for my preseason darlings to hold on to any West crown.

But the divisional races might not even be the most exciting factor coming down the stretch of the National League. As you pointed out, as many as four or five quality teams could be neck and neck for wildcard spots during the season’s final few games. Call it a hunch, call it a random guess, call it intuition. I think both NL wildcard teams come out of the Central. Atlanta is simply too uneven this year. The offense is a mess, and the starting pitching has really been anchored by guys overachieving. The same goes for San Francisco. The Giants’ offense has barely scored more than Atlanta this season, and their pitching will rely an awful lot on the recently acquired Jake Peavy.

Meanwhile, in the Central, Pittsburgh and Milwaukee are both cruising, can both pitch enough and can both score in droves. The Brewers have one of the best road records in all of baseball. A playoff berth seems guaranteed if Yovani Gallardo keeps pitching like he did in June and July rather than how he threw in May. And the Pirates are just so, so steady. They have a lineup of six or seven solid hitters night after night and a rotation of five good hurlers. None of their starters are anything close to ace-level, which should worry Pittsburgh fans heading through the playoffs, but good depth should get them in.

[If you missed Part one – MLB Halftime in the NL]