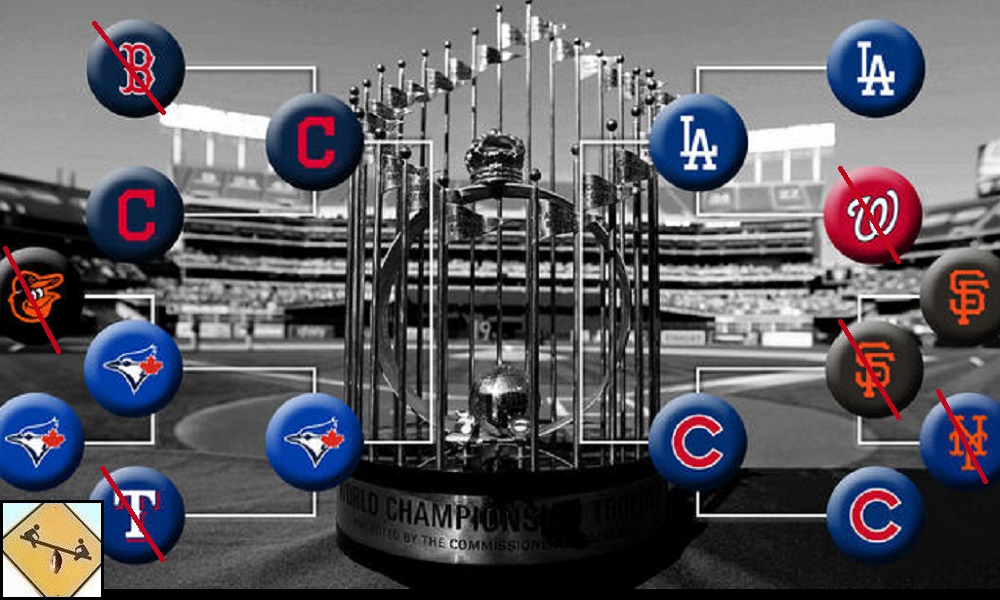 There’s the Chicago Cubs and everyone else in the MLB Playoffs 2016. Does anyone even care about the American League Championship Series? Let’s not imagine a Dodgers victory either. That’s blasphemy!

We have reached the final four of the MLB postseason with the Chicago Cubs and Los Angeles Dodgers squaring off in the NLCS, and the Toronto Blue Jays playing the Cleveland Indians in the ALCS. It’s a foursome of classic tortured fan bases.

Chicago’s title drought is well covered. Los Angeles hasn’t won since the late 1980’s; Toronto since the early 1990’s; and Cleveland is the AL’s version of the Cubs. Not counting franchises that have never made a World Series, these four teams are all in the top 10 in terms of longest time since their last title-game appearance.

The American League takes center stage first with game one tonight. I was very surprised with the way Cleveland got to this point, especially considering two of its three best starting pitchers are out injured. Cleveland was, thus far, the only team I incorrectly predicted to advance this entire postseason. My 5-1 record is sure to crumble moving forward, but for now it looks impressive.

ALSO ON BUZZCHOMP: The Next Great TV Show Built Here!

It is also hard to take too much credit in tabbing the Dodgers to advance since their series against Washington could not have been any closer. I don’t love how the Cubs are playing right now, but I also don’t see Los Angeles winning another round.

The Dodgers were forced to turn to Clayton Kershaw to mop up and close out game five of the division series. That puts their best weapon on the shelf until at least the middle of the LCS. Meanwhile, Chicago has its rotation righted, with its three aces ready to roll from game one. I need to see more from the Cubs’ offense, especially the big bats of Anthony Rizzo and Kris Bryant, but even that may not be needed to win the NL pennant. Chicago was this good across its roster all season.

I can only imagine the excitement and pressure surrounding the Cubbies if they do advance to the World Series. It will dwarf any and all storylines out of the American League. Is it me or does the AL series seem kind of boring? I like Toronto to advance once again, but not because it actually feels like the best team in the league. Instead, it simply feels like the best team remaining, which I guess is the point.

Toronto has heavy star power on offense and has been getting insane performances from its unheralded starting pitching. That should be enough to cruise past Cleveland. Andrew Miller can’t pitch three innings every game (I assume), and the Indians don’t have too many weapons outside of him. Of course, they have done it all year with a mishmash of talents. I will only be slightly surprised if they win another playoff round. Though, no one will be paying attention to them anyway.

As a Los Angeles local, I’m thrilled the Dodgers and Cubs are facing off in the NLCS. Obviously the entire country is on Chicago’s side, but as a Yankees fan I’m personally torn about who to root for. My city’s team or the team with the longest championship drought in professional sports? As for the ALCS, I’m certainly rooting for Cleveland. Most fans might not care, but the Indians and their city are nearly as downtrodden as the Cubbies.

While Toronto and Cleveland will be a good series, I’m not sure baseball fans will notice. How can you top Dodgers versus Cubs? Los Angeles has perhaps the best pitcher in baseball, while Chicago has easily been the best team all season. Will another curse rear its head? I don’t think so, yet I’m hard pressed to pick a winner. You’ve crushed your predictions to this point, but I think the series will be infinitely closer than you care to admit. Despite the Dodgers’ tenacity thus far in the playoffs, I believe Chicago will advance.

I like Cleveland in the American League. After the way the Indians manhandled the Red Sox, I refuse to pick against this baseball team. I know its falling on deaf ears, but something about Cleveland feels special this postseason. If the Indians make the World Series, then game one will be played on the exact same night that the Cleveland Cavaliers hoist their championship banner and receive their rings, literally across the street. The ballpark is next door to the basketball arena. I’m on the side of fate here. Hopefully America will notice.

Halloween Comedy: Are You Afraid of the Dark?


Does the World Series matchup really matter at this point, as long as the Cubs make it? I feel like the NLCS is this season’s biggest series. We see this quite often. When the Red Sox broke their curse, the biggest and most exciting series that year was the ALCS when they overcame the Yankees. I want to see Cubs versus Indians, because then no matter who wins, an enormous losing streak will come to an end. Nothing about the Blue Jays excites me, sorry not sorry. Obviously if the Dodgers make it, everyone except us in Los Angeles will be upset. No one really wants that.