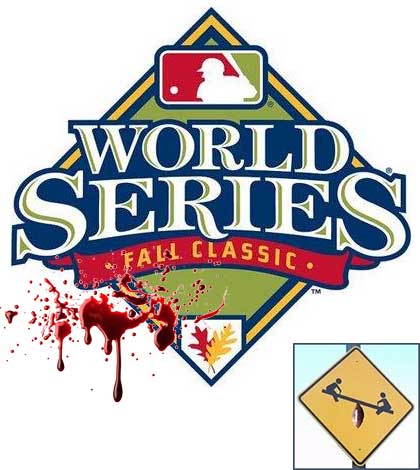 [Part one – A good and bad Derek Jeter goodbye]

The LDS’s are underway. The American League kicked things off last night as Baltimore used the eighth inning to blow out the Tigers, and Kansas City once again found extra inning magic in a victory over the Angels. Today the National League get things going and wow; these four match ups are bloody good. Halloween blood all over home plate good.

I have come around on the wildcard round as a precursor for the division series. At first, I was against the playoff expansion. It seemed unnecessary. But now I very much enjoy the benefit given to the division winners and the one-game extravaganza undertaken by the wildcard teams. It doesn’t really tell us much of anything about the teams competing other than, on that specific day, one was better than the other. However, with the baseball playoffs, small sample size has always been an argument against the best team winning the World Series, let alone a specific round or game.

For the league division series, it’s a surprising group. In the AL, no one has elite starting pitching outside of Detroit and everyone has a great bullpen outside of Detroit. The Royals can’t hit a lick but went off for nine runs in the wildcard game against one of the league’s premiere pitchers. Between the Tigers, Angels and Orioles, the rest of the remaining offenses are all super powerful. Even though the regular season was pitching-dominated, it’ll probably be the offenses that control the American League playoffs this time around.

As for the NL, things look like a mirror image. The Dodgers, Cardinals, Nationals and Giants all have good pitching. In fact, it’s arguably the strength of all four teams depending on health. While all the AL clubs outside of Kansas City were in the 700’s for runs scored in the regular season, only the LA Dodgers reached that mark out of the NL playoff teams. And that follows suit as they do seem like the most well-rounded of the bunch.

I’m still a sucker for a good starting pitcher, despite what we’ve seen so far. With aces up the wazoo, I think the Tigers are a better ball club than the Orioles and should advance, even though Baltimore was clearly better throughout the regular season. The Angels should also dispatch Kansas City because they’re better from top to bottom and can even compete with KC’s one main offensive skill: baserunning.

The National League is harder to figure just because the teams seem more balanced. There isn’t the heavy offense versus defense feeling that comes from the other league. The Washington Nationals are a more successful version of the Tigers. I like them to take down the Giants. Washington has the elite starters as well as talented bats, but unlike Detroit, they also played like it throughout the regular season.

In the final division series matchup, the Dodgers have more talent, especially healthy talent. St. Louis just always wins though! Was there ANY doubt they were going to win the NL Central this season? I had none, even while Milwaukee was running away and hiding. I believe we both picked them to come back and take the division crown, and that’s just how it happened. So how can you count them out in any playoff series with Yadier Molina back and Michael Wacha available?

Of course, I still have to go with LA. Clayton Kershaw could win twice on his own. They also have Zack Greinke and possibly Hyun Jin-Ryu as well. Not to mention, the Dodgers have one of the best offenses in all of baseball. Give me LA to finally get over the hump here and advance.

Nothing like a good old fashioned playoff preview full of picks. I’m a sucker for alliteration, if you couldn’t tell. I’m also a sucker for star players performing like stars in the playoffs. Good thing this year’s MLB postseason is full of hot commodities to root for.

Before I dive right into my division round picks, I wanted to note that something is still lacking from the wildcard round for me. I absolutely love the drama its brought to the final weeks of the baseball season. This uses to be a rare thing, but now we have tons of teams still alive up until the last few nights of play. Excellent addition from that regard. But then to the wildcard victors go a pretty lackluster prize.

Baseball teams never face off for a single game. Every series throughout the season is just that, three or four games. So when the wildcard teams play one game for all the marbles, it feels out of place. It feels like a play-in game. I’d really love to see a best of three happen for the wildcard round. I know its hard to schedule and we lose the sudden death drama, but right now the one game round feels too quick.

But that’s a minor gripe, don’t get me wrong. I love the teams in the MLB divisional round. This should be exciting! In the American League I’m high on the LA Angels, mainly because I want to watch Mike Trout destroy the playoffs. But also because they’re a great all around team. They’ll defeat the Royals.

Unlike you, I like Baltimore to take down Detroit. Something feels out of place with the Tigers to me. Add to that my inability to fully process how good the Orioles were this season, like really damn good, and I believe they keep it going.

The National League is a bit more up in the air in my opinion. The Giants have proven their ability to win in the playoffs despite the odds. The Cardinals have done the same thing. And both of their opponents have little to no playoff experience to fall upon. Yet I’m with you. I think it’s the Nationals’ and Dodgers’ years to make waves and grab headlines. It won’t be easy, but both LA and Washington (DC) advance.

Photo and Logos courtesy of TOTALFRATMOVE.com, and Major League Baseball