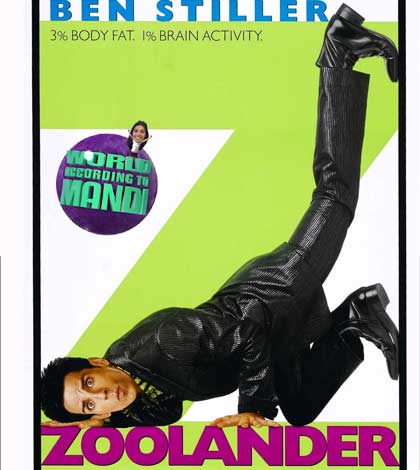 For years the rumblings of a Zoolander movie sequel got thrown around, a sequel I’d always wished would happen and now finally IS happening. Last week actors Ben Stiller and Owen Wilson announced the new film by walking the runway as Derek and Hansel in a Valentino fashion show. How fitting and wonderful! Some long awaited sequels were ultimately disappointing, we’re looking at you Anchorman 2, but we have HIGH hopes for Zoolander 2. Long Live Zoolander.

Have you watched the original Zoolander film recently? The humor still holds up! Even all these years later, it is HILARIOUS. The sequel’s being written by Ben Stiller and Justin Thereux, who also wrote the original. Score! That’s a huge plus in our book. Ben and Justin wrote “Tropic Thunder” together as well, which is super hilarious. Let’s keep the laughs coming guys.

Let’s face it, the one-liners from Zoolander are classic. Classic kids! During Hansel and Derek’s walk off competition, Hansel says “Don’t you know I’m loco?” Love that line. So clever and great and I laugh every time I hear it. What about “Orange Mocha Frappuccino?” Classic. Let’s not forget when Hansel, Derek, and Matilda are high and partying and Matilda admits she was “bulimic.” Derek’s response; “You can read minds?” Love it! The disease isn’t funny, but their reactions were priceless.

Like so many other films, Derek Zoolander has a moment of inner conflict and flees the male modeling world. He returns home and works the coal mines with his father and brother, Jon Voight and Vince Vaughn. After just one day of work Derek tells his dad “cough, cough” “I think I have the black lung pop.” He BARELY worked at all. Right as he says that, one of his commercials comes on in the bar and of course his family is embarrassed. It’s at that moment Zoolander utters his famous line: “Merman. MERMAN!” He then heads back to Los Angeles to take on Mugatu, Will Ferrell, and save the Prime Minister of Malaysia.

Tons of movies have attempted to be as funny and creative as Zoolander over the years. Most of the time they’ve turned out super stupid and not very funny. Seeing all the pictures from Fashion week, with Ben and Owen walking the catwalk and posing, I got an awesome feeling about the sequel. These two guys slid right back into Derek and Hansel! “Hansel, he’s so hot right now.”

Apparently the sequel will take place ten years after the end of the original. Derek and Hansel are no longer in the limelight, but it seems they’ll be making a comeback! Could the new film make a comeback of its own for comedy?

Not only am I excited to find out the new storyline, I can’t wait to see all the cameos. Will Billy Zane be back? What about Jon Voight and Vince Vaughan? There’s sure to be some wonderful cameos, but topping the original will be tough!

Mark it down on February 12th 2016. Long live Zoolander! I can’t wait to see how funny you are this time around!