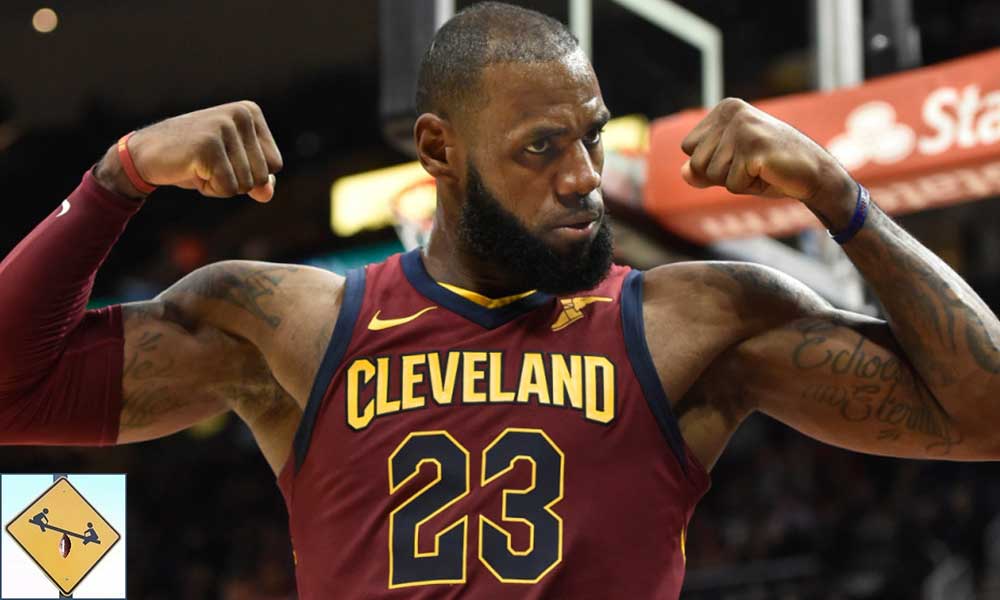 You know what’s not fun? The Golden State Warriors’ showboating, that’s what. You know what is tremendously fun? LeBron James as the underdog, for perhaps the first time in his illustrious career.

Well, game one of the 2018 NBA Finals sure did seem like LeBron James’ destiny, as you mentioned prior to the series. He put up a career-high 51 points in a finals game, and the Cleveland Cavaliers really should have won the contest in regulation. JR Smith is obviously to blame to some degree, but so are the referees. Especially down the stretch, this was a horribly officiated game in favor of Golden State. After the game, Smith claims he knew the score was tied. This seems dubious. The cameras sure seem to catch him telling James he thought they were ahead. And besides, his actions don’t align with someone who thought it was a tie ballgame. Not that any of that would have mattered if the referees hadn’t missed multiple fouls on the Warriors down the stretch and then reversed that block/charge call against James in something so idiotic I didn’t even know it was allowed under NBA rules.

I have never been a fan of Cleveland specifically. I admit that I had been rooting for another Warriors-Cavaliers finals matchup, but never with a side in mind until now. That has all changed and I am now pulling hard for Cleveland. For the first time of this GS era, I see the Warriors as villains to root against. Maybe other basketball fans got to this point when Kevin Durant signed, but that didn’t bother me. Now, Durant and company bother me much more.

KD is playing so selfish it’s obnoxious. I don’t have the tracking data in front of me, but based on the eye test, it feels like he is playing iso more than ever. And that is a particularly egregious basketball decision considering the offense he plays within. I can’t believe he finished game one with six assists. Forget notching an assist, I don’t remember him making six total passes in the contest! He’s still an incredibly talented and effective offensive player, but he isn’t fitting well into this Golden State scheme. He’d be better served playing on the Rockets or Thunder (ha). With their best player going off script, it has made the entire Warriors less fun to watch, and yet Steph Curry seems more obnoxious than ever with his antics, and Draymond Green is the biggest villain in the sport today. Both guys seem to relish gloating and boasting after hitting a big shot, regardless of if they just missed seven straight before that.

Curry has turned into a peerless front-runner, and somehow, Green is worse. There was no better encapsulation of this than when Green hit one of his three-pointers in game one. The Cavs leave him WIDE open every attempt because he is trash from distance. He missed all his WIDE open shots to that point, but that didn’t stop him from prancing and yelling after one make. Add to that his ridiculous taunting with Cleveland at the foul line and then in Tristan Thompson’s face at the end of the game. He is just so unlikable. I know he always has been, but it bothers me more now that his star player seems to be following his terrible example.

ALSO ON BUZZCHOMP: NY Yankees Using AAA Like No Other Team Before

None of this will stop Golden State from likely winning this series. A lot of people are taking game one as proof that the Cavs can hang in this. I’m more pessimistic. I think Smith dribbled out the clock on Cleveland’s best and only chance to steal a game in Golden State.

I’m still a believer in the Cleveland Cavaliers and am thrilled you’ve officially joined the bandwagon. Once Kyrie Irving left Cleveland, the Cavs were no longer prohibitive favorites to win anything at all. This put everything onto LeBron James’ legendary shoulders. Each win became his to own, not matter the cast of players around him. Now that James has taken his team to the 2018 NBA Finals, they are actual underdogs for perhaps the first time in his entire career. This alone makes them fun to root for. Then there’s the villains in Golden State.

Curry’s antics were fun at the beginning. His teammates and their bravado were refreshing when they took the NBA by storm. Yet none of them have been humbled by their championships. The addition of Durant, who seemed to be a humble man, has actually made them worse as a team. Durant’s way of being in OKC appeared legitimate, yet he’s now a completely different player persona. He became a villain, which he seems to have embraced. Doing so worked for LeBron many seasons ago, but it’s not for everyone. It’s also perplexing why/how being a villain changed the way Durant plays basketball. Is he the outcast of the Warriors? Does he hate how his teammates showboat over nothing and lashes out with his play? I can only imagine this is the case.

Rooting for LeBron James has always been fun for me, mainly because the entire sports world was against him for so long. He was dubbed the King before he entered the league and always needed years of great play to actually earn the title. James is now legitimately on Michael Jordan’s level, but for different reasons. That is what makes sports great. Different eras offer different types of players, each as dominant as the other. You can hardly compare quarterbacks or pitchers between eras and basketball is no different. That being said, no matter how you feel about LeBron James and his legacy, there is one other reason to root for the Cavaliers that has nothing to do with him.

If you desire to see the Warriors broken up, or silenced and humbled at the very least, then you must root for Cleveland in the NBA Finals 2018. Another championship gives Golden State three in four years. There will be no end to the showboating and no reason for Durant to become the player we once loved. A win for Cleveland may put an end to the shenanigans, or perhaps this is wishful thinking. I’m hopeful none the less. Go Cavs go!