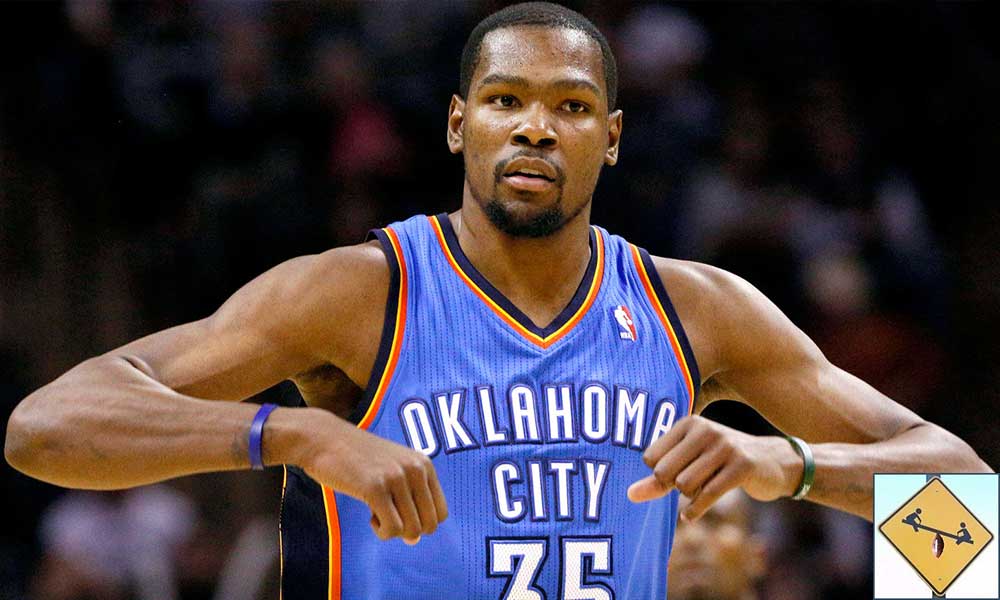 Kevin Durant has six teams and over $100 million options in NBA Free Agency. Confused? We break down the decision between real and no gosh darn way.

NBA free agency is underway. The crown jewel of this offseason is one Kevin Durant, the seven-foot forward who doesn’t want to be called seven feet tall. Despite the takeoff of Stephen Curry and the domination that was LeBron James in the Finals, Durant still has an argument as a top two player in this league. Him being available is amazing. What’s even more amazing is that, because of the sky-rocketing salary cap, oh so many teams have the means to sign him to a max contract. A former league MVP up for bidding from at least half the league; this is just insanity. (Not to be confused with Linsanity.)

Of course, having the means is different from having a chance. Durant has planned meetings with just six franchises. Because he is in charge of this process, and because obviously any organization would be delighted to have him, rather than looking at a Durant signing from a team’s perspective, it makes more sense to look at this from his perspective. Where and what should Kevin Durant do?

Here are his options financially: sign a max max in terms of years and dollars. This would guarantee him something well above $100 million, whatever the math works out to be based on the new cap. Option B is sign a one-year deal (or two-year with an option after the first) and re-enter free agency again in 2017 with an even higher cap (and thus higher max) expected.

Here are his options on the court: return to Oklahoma City and try to finally win a title there; move to one of the best teams in the league in Golden State or San Antonio; move to the easier Eastern Conference for Miami or someone else; move to a big market like the Clippers or a darkhorse.

So much is on the table. If you are Kevin Durant, what do you do?

Everyone seems to think he will surely take the one-year contract to get himself the most total money when all is said and done, but I’m not a believer in that. As a person, Durant seems to hate this whole process. Why go through it two years in a row? He also is coming off of a major injury that submarined his 2014-15 season. Why not bank the max amount of money you can right now?

But if he’s going to take a five-year deal somewhere, it becomes even more difficult to pick a locale. If he returns to OKC, Russell Westbrook may leave him after next season when the latter becomes a free agent. If he picks a new franchise, what if things get off to a rocky start? He’s stuck for four more years. Nevertheless, if I’m him, I take the max and probably stay on the Thunder. It’s a boring pick, but it’s the most logical in my mind.

I actually understand Durant’s options now, so thank you for that. But you completely ignored the most important factor in his decision, the human factor. Kevin Durant is not simply about the money, so I agree he’ll likely sign a max deal, instead of taking the one year contract with the one year player option. He does not want another Free Agency frenzy next summer.

I read an article about Durant early in the 2016 season and something in particular really stuck with me. Durant basically created the Oklahoma City Thunder and the city itself where the team resides. Before the Thunder and Durant, there was very little to speak of in OKC. He’s been the face of that team his entire career and he takes pride in having helped the city and team rise from the ashes to be a serious championship contender. Durant is not going to abandon the city unless he joins another team with an equally appealing fanbase and basketball situation.

Every player dreams of their one big payday. Some players actually get more than one, but Durant is likely happy with this one summer of cash. Westbrook gets his big summer payday next year. He will not pass it up. The two are friends, very good friends by all accounts. But no matter how close they are, if Durant returns to OKC only one thing will keep the team together. Unless they win a championship this coming season, I see no reason to believe Westbrook remains in OKC. He’ll take the max money, or a one and one contract. Durant wants to find some stability and I don’t believe his current team in OKC offers anything close to this.

Golden State is Curry’s team, but its an equally as appealing area to play in and win a title. I don’t see Durant on the Warriors, however. Miami and the Clippers are big cities and big media markets. That is not Kevin Durant. For me there is only one real front runner in this decision, the San Antonio Spurs.

San Antonio is a small city with a loving fanbase. It has possibly the best coach in the league, a powerhouse team with its former superstars heading into retirement. The Spurs need a new face of their franchise. If Durant joins them, I see Duncan sticking around one more season. Hand the keys over on the court to a new era of stardom. San Antonio is the closest thing to OKC out there and a more appealing team to play for, in my opinion. The Thunder have their work cut for them, if they hope to ‘defeat’ the Spurs this summer.