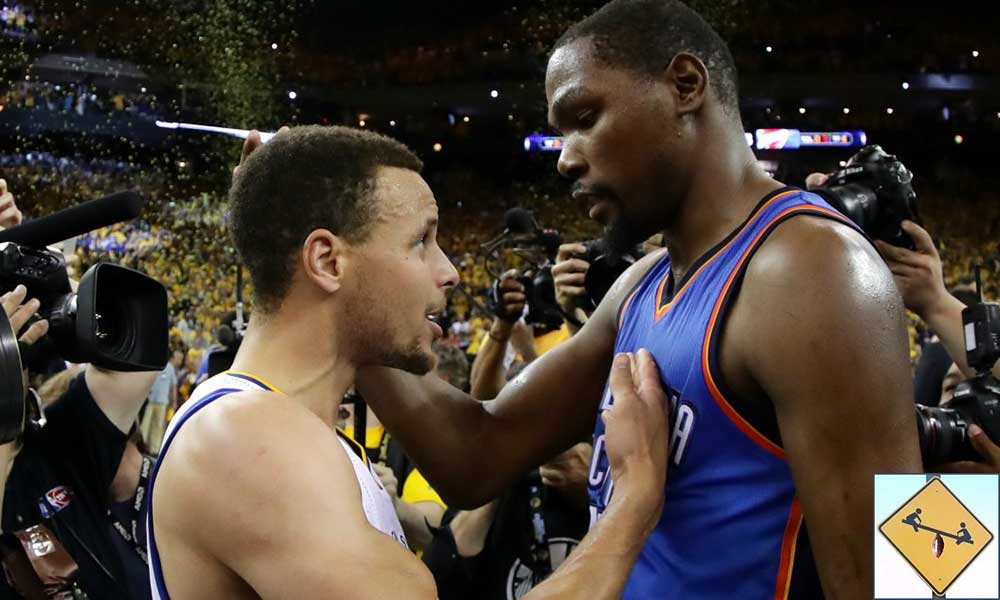 The Golden State Warriors did the impossible and only karma can stop them now. With Kevin Durant an even better season is looming and the NBA has officially been ruined.

A few big name teams like the Knicks and Celtics have made ‘major’ moves, but the real power teams in the NBA have been quiet. Both the Cavs and Warriors need to do something to stay on top, don’t they? I mean Cleveland has to re-sign LeBron at least. And the longer Durant is out there, the more unpredictable his decision becomes.

The NBA’s silly, frankly idiotic offseason moratorium period wraps on July 7, when the new fiscal year officially begins and signings can actually take place. Until then, as we found out last season with DeAndre Jordan, nothing is official. However, all the “moves” that go down we take as official. Agreed in principle is good enough for the NBA, so it’s good enough for us. And boy were there a ton of free-agent bucks being tossed around, in principle, this first week of free agency.

We know and knew that the dollar signs would be high because of the rising salary cap. That was no story. But there still remained some insane signings. It’s just hard to fathom that Timofey Mozgov, the first player to agree to a new contract in free agency, is worth $64 million over four years. He completely fell out of the Cavaliers’ rotation last season and was unplayable during the playoffs. The size of signings for guys like Evan Turner, Joakim Noah, Ryan Anderson and others were equally as absurd. The list of guys getting max deals also caused slight squeamishness but, again, was expected. With many teams even under the salary floor, there was money that “needed” to be spent somewhere whether the person on the receiving end was completely deserving of the total or not.

Although nearly every big name through the first few days re-signed with his old club, there were some good moves mixed into the landscape of rising dollars and re-signings. I liked Milwaukee’s addition of Mirza Teletovic, assuming the Bucks can find him minutes. Obviously I liked the Boston Celtics’ acquisition of Al Horford, one of the biggest stars in free agency to find a new home.

As of 10:00 AM Eastern on this holiday morning, the biggest chip to fall is still teetering. That being free agent forward Kevin Durant, though other big names like Dwyane Wade and Pau Gasol are also still lingering without deals in place. Durant seems to have narrowed his sights on Golden State, Oklahoma City or perhaps Boston. Some folks are taking the delay as a sign of him moving to a new home, but I see no reason to suspect the Thunder are not still the favorites to retain his services. If that is the case, the Western Conference landscape remains a three-team race with the Los Angeles Clippers lingering. Meanwhile, the East got more interesting with Boston’s advancement whether the Celtics manage to lure Durant over or not. Horford is an underrated player in this league. He immediately becomes the franchise’s best player and adds to what was a very deep roster of useful players.

Kevin Durant just ruined basketball all over again. We knew before this past season began who would likely represent the East and West when all was said and done. We were right. Yet after this past postseason, there was reason to hope that perhaps another powerhouse could take control in the West going forward. That dream is dead. Durant joins the Warriors who will win the Western Conference, unless karma deals them a healthy dose of injury. Just saying.

Golden State is now even more crazy, silly, good than they were a season ago. At least on paper. There is no guarantee that this rotation works as well as we think it will. The Warriors also lost their assistant coach, who just so happened to be the interim head coach for much of last year. Plus Durant did in fact agree to a one and one, meaning he is a Warrior for one season and can make an all new decision next summer once he sees where Russell Westbrook lands.

Ultimately this whole business of stacking stars is ruining the NBA. It has basically eliminated the hope of an underdog team emerging from nowhere to win. We get this in every other major sport, a team with young stars and a few old veterans who all of a sudden click and elevate into the championship discussion. But in the NBA we know where the best players are playing and their super teams are not going to be defeated by anyone other than another super team.

The Knicks and Celtics are forming mini super teams. Cleveland has a bonafide super team. Is San Antonio’s super team dead? The super team in OKC is dying and the one in Los Angeles can’t stay healthy. This leaves the Warriors’ super team which just added another super hero. They are going to have to re-shoot the new Space Jam movie, because this super hero battle is stupid crazy now.

By noon eastern time, I’m left dumbfounded at something that isn’t really surprising at all. I just personally never thought a player of Kevin Durant’s stature would want to join a championship contender that just vanquished him from the playoffs in debilitating fashion. We have witnessed the epitome of the phrase “if you can’t beat em, join em.”

The Golden State Warriors, with the best foursome in the NBA, are prohibitive favorites to win the 2016-17 title. It feels like a crowded roster, but that’s just a gut reaction. We will have to wait and see how each piece is used and what rotation develops. Interestingly, Durant signed a two-year deal with a one-year out, the contract most everyone expected he would sign with Oklahoma City. What this means is anyone’s guess. Would he actually leave Golden State if the Warriors don’t win next season’s title? Or was it just a money grab a la LeBron?

In the grand scheme, we already knew players of this generation have no problem joining up with fellow stars to chase a ring. In fact, they desire such an arrangement. When the league had far fewer teams, this type of outcome developed organically anyway, but it just feels dirtier now since it’s by choice. Everyone said what I am saying now about LeBron back when he joined the Heat. As the days pass, it will be interesting to see if Durant gets similarly dragged through the mud for “giving up”, “finding help because he couldn’t do it alone” and any of the other catch phrases bandied about for James. I’d argue this move was even more egregious than James’.

Oh, also, that stuff I said about the Celtics moving into the conversation? Yeah…they have no shot at a title now.