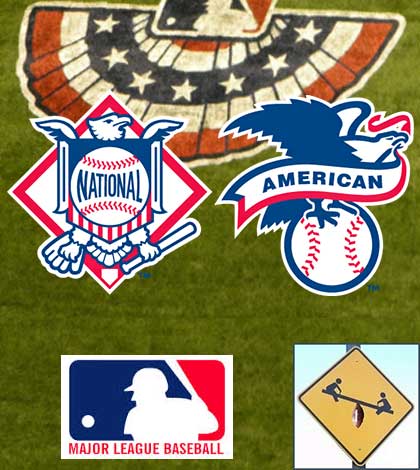 Boy oh boy. Just to recap the stupid, idiotic, utterly pointless endeavors that were the AL and NL division series:

Now that that’s out of the way, we can move on to the league championship series, which start Friday night with the ALCS! Who’d have thought Orioles – Royals would be a postseason thing beyond the sentence, “you know which teams seem to never, ever make the postseason? The Orioles and Royals.”

Instead, they will battle for the pennant and a berth in the World Series. The advantages each side has are obvious. Kansas City has the better starting pitching and better baserunning. Baltimore has the better offense and home field. Both teams have good defenses and good bullpens. BUT, as we learned last round, specific advantages don’t really mean squat.

Who has the edge then? The hell if I know!

As for the National League, the Giants and Cardinals both enter the LCS with winning on the mind and a winning spirit these past few years. Before the Red Sox took the title in 2013, these two NL clubs won the previous three championships.

They also come in with similar roster constructions. Both have an ace (Bumgarner and Wainwright) followed by a number of solid starters for depth in the rotation. Both have a star catcher (Posey and Molina) surrounded by just okay bats and players elsewhere on the diamond. Each team’s bullpen is fine but doesn’t instill the confidence of their AL counterparts. The managerial edge definitely goes to San Fran just because Bruce Bochy is a Hall of Fame-to be manager and Mike Matheny is not, not yet at least.

So, once again, where does the edge lay? Who freakin’ knows!

You accomplished a rare feat my friend; a clean sweep of the reverse jinx through the divisional round of the MLB playoffs. A clean sweep! You were smart to avoid making picks for the LCS series. I feel as though the power of your reverse jinx is too strong. Best left alone.

If you had asked anyone during Spring Training who they thought would be the final four in the MLB playoffs, two teams from the AL and two from the NL, I can guarantee that outside of Baltimore, no one was betting on the Orioles and Royals. I didn’t even mention Kansas City fans, because be honest, you didn’t think your team was getting this far.

The exact opposite is true of the Giants and Cardinals. Both of those teams have had A LOT of success recently. Sure, preseason picks favorited other squads in their divisions, but most people saw them as playoff teams. And everyone knows how well St. Louis and San Francisco manage to play come the postseason. Picking them was a solid bet from day one.

But the real question is, what can we expect from this final round of games before the World Series? You through dust to the wind and gave up… Since I don’t want to swear, I’ll keep my mouth shut. I’m psyched for these two matchups for every reason you layed out.

Kansas City is on some kind of crazy momentum train, but Baltimore still has the edge. The ALCS is going six or seven games. I think pitching takes a back seat to the continued offensive onslaught of the Orioles and Royals. As close followers of the AL East, its been Yankees or Red Sox for the majority of the decade with some Tampa Bay sprinkled in. But there was always a feeling that the Orioles time would come. This is their year to make the World Series.

In the National League I think things are more defined. San Francisco was a beast early in the regular season, trailed off during the dog days of summer, and has now found itself again when it matters most. This isn’t to say that St. Louis is overmatched or has played poorly. Obviously they have not. But I like the Giants to shut down what little offense is left for the Cardinals and remind everyone why it was ludicrous to think the Dodgers would unseat them for NL West division dominance.

I think I lack a jinx, but we shall see. Will it be Giants Orioles in the World Series? Or some combination of teams that makes me wrong?

[If you missed Part one – Crazy unpredictable MLB Postseason]

Photo and Logos courtesy of LAZER1033.com, and Major League Baseball