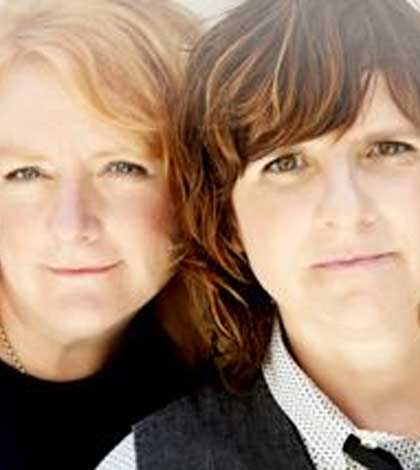 Teasing with sultry soulfulness, like a gorgeous dream played out for the ears, Indigo Girls’ “Beauty Queen Sister” satisfies with lush lyrics and lavish arrangements that fuse like well-matched lovers to a symphony orchestra.

At the core of Indigo Girls beat the brave hearts of activism. Amy Ray and Emily Saliers have always marched to their own drummers, making out the beats of inner wisdom in music, as in life, by championing the rights of society’s marginalized, often playing fundraisers and adding original folk to the lore of too-often martyred victims. Many of us have grown up on Indigo Girl anthems, feeling that much “Closer To Fine,” for having adopted them as our own.

Conducting a career in the public eye with the courage of convictions while earning seven gold records, four of them platinum, and record sales of over 12 million, isn’t the only kind of challenge Indigo Girls embrace. Now touring in support of their 14th studio album, the masterful Beauty Queen Sister the Grammy Award-winning folk/rock duo are also performing select shows with various orchestras around the country. The veteran performers are dedicated to connecting with their audience, so Indigo Girls performing a tour within a tour seems a next step in the marriage of their musical aspirations and level of commitment.

Touring venues across America with Atlanta’s Shadowboxers, as well as appearing with a host of Symphony Orchestras; Indigo Girls performed to a sold-out crowd at their election day show in Chicago. Next they’ll head to Portland to appear with the Oregon Symphony, then home to play with the Georgia Symphony Orchestra, with scheduled stops for their album tour with Shadowboxer along the way. The avant-guard pairing of folk-rockers with symphony orchestras is a captivating and moving experience for audiences and performer alike.

Catching up with Amy Ray, the veteran performer admits that, “It’s a challenge,” playing in front of a full orchestra, “This will be only about the sixth one that we’ve done,” and offers high praise to “amazing arrangers,” Sean O’Loughlin (Chris Isaak, Feist, The Decemberists, Josh Ritter) and Stephen Barber (Rosanne Cash, Alejandro Escovedo, John Legend), who wrote the orchestral charts for all of songs selected from the Indigo Girls catalog.

Indigo Girls got their first taste or orchestral maneuvering just a few months ago, in Chattanooga, Tennessee. Ray confesses that both she and band mate Emily Saliers are both, “More nervous than at our normal shows” when collaborating with a symphony, and relates that the first time was, “Incredible! We were really nervous… incredibly nervous. We had to play everything right, or it wouldn’t work. The first time it’s incredibly scary. When you get used to it, it just feels… incredibly great! Little by little, you get better at it. It’s very different to hear all of these musical motifs played by the different instruments. There’s even more dimension to the songs. It’s an adrenalin rush!”

Beauty Queen Sister, “Was recorded in two weeks, according to Ray, “I felt we captured a magical time with a phenomenal group of performers. When we finished the record It was way beyond my expectations. We created a band for the record. It was incredible.” Teasing with sultry soulfulness, like a gorgeous dream played out for the ears, Beauty Queen Sister satisfies with lush lyrics and lavish arrangements that fuse like well-matched lovers to a symphony orchestra.