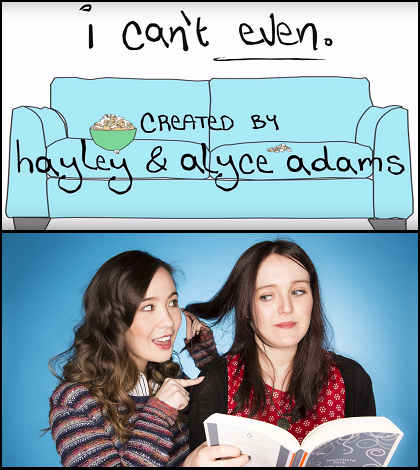 From Harry Potter to Star Wars, to Twilight and Lord of the Rings, if you’re a fanboy or fangirl then this quirky web series is all for you. “I can’t even” perfectly describes itself, as leading ladies Em and Lex become their favorite obsessions. Nothing’s funnier than getting a real life Hogwarts acceptance letter, only to find out it was a good-natured birthday gift. I want to do magic, damn it!

BuzzChomp got to know Alyce Adams, writer and co-creator of the show, asking a few tough questions and several that dove down the rabbit hole. If you’ve got questions of your own, hit up the comments section below, or send them love on the “I can’t even” Youtube channel: One apartment, two friends, and an exponential number of fandoms to argue about.

“I can’t even” ep 1 – Hogwarts forgot my Letter

BuzzChomp: Love the funny mix of pop culture icons/fanboy obsessions as the “theme” of each episode. What was the brainstorming session like to pick Star Wars, Vampires, and Harry Potter?

Alyce Adams: I essentially made a list of all my favorite fandoms and then brainstormed possible episode ideas based on them – what were the major conflicts or talking points for each fandom?

The easiest one was Star Wars. Is there anything bigger in all of geekdom than the pure, visceral hatred for the prequels? Having one of our characters like them over the originals was too good of an opportunity to pass up. Getting one of our actors to pretend to like the prequels was harder though. It was a true testament to their commitment to the series.

BuzzChomp: We at BuzzChomp are huge fans of quirky comedy, and feature our own brand on Pillow Talk TV. Do you have any specific inspirations for your style of humor? What’s your goal when trying to make people laugh? You were very successful by the way.

Alyce: I think one of the biggest influences on my writing would be Joss Whedon, specifically Buffy the Vampire Slayer, although I was fairly late to the game. The snappy rapport between the characters is something I definitely tried to recreate in my own writing. That style just really clicks with me.

Now I try to watch as much female led comedy as possible, like Broad City, Parks and Recreation, The Mindy Project, and Inside Amy Schumer. When I write, I just try to come up with something that makes me laugh. That’s normally how an episode takes form, over one small joke or concept that I then fill everything else around. Hopefully others find it funny too.

I can’t even the web series

BuzzChomp: Great title for the show. It sums up my feelings perfectly. Whose idea was it? There’s definitely a story there.

Alyce: Well, we actually had a different name for the series and had even shot the first episode when Hayley and I thought to ourselves, ‘hmm, we should probably get the YouTube URL in case someone else has it’. Turns out that someone else did.

Why didn’t we Google search the name before? Who knows. That would have been practical and thinking ahead. I suppose our egos were so large that we thought it would be impossible for anyone else to think up such a title. Anyway, it was then a mad panic for the next week or so as we tried to brainstorm alternative titles.

We landed on “I can’t even” because the saying belongs to the fandom/internet culture, which our show is based around. In addition, the saying perfectly encapsulates the pure uncontrollable joy of a fangirl during her worst phases. #ForceAwakens

BuzzChomp: Tell us something funny or unique about you. Come on, do it.

Alyce: The first fandom I was ever a part of was for ‘101 Dalmatians.’ I was about six, but my passion for it ran deeper than my tiny body. I was obsessed. I watched the movie all the time and had a Lucky costume (the coolest dog from ‘101 Dalmatians’ for those uninitiated) that I wore constantly, even after it started getting too small for me.

I even acted like a dog sometimes, to the point where a family friend was seriously concerned for me. I eventually moved on to other obsessions, but I view it as the training ground for the creation of this series. It’s where I first learnt how to fangirl.

Go Watch. Seriously! I can’t even the web series

Credit “I can’t even” for images and screen shots.