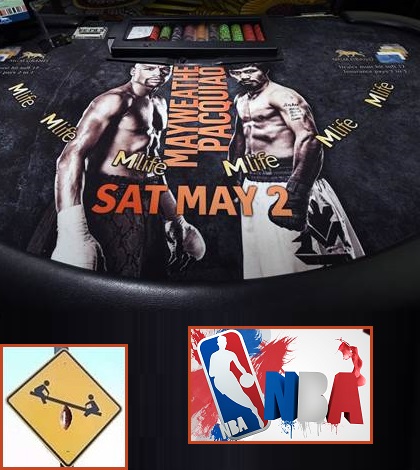 The Greatest sports weekend fell flat on its face, yet was just as wild and crazy as ever. The NBA Playoffs stole the show as Spurs vs Clippers was amazing. Yet what happened to boxing, horse racing, and a baseball rivalry? Yeah, we know it’s not the mid 1900’s.

Saturday, May 2 will go down in sports history as a day in which lots of things took place. Okay, so some were calling it the greatest sports day of this generation, and it certainly had a lot going on. But as happens with sporting events, not everything lived up to expectations. Maybe you cannot have too much of a good thing because things are bound to fizzle out.

Nevertheless, Saturday was chock full of goings-on. That is not up for debate. And it was all immensely fun to follow, before and after the fact.

The folks over at Rukkus put together an infographic highlighting some of the data prior to the big day (Click to view). The full graphic is also at the very bottom of this post.

I also tried my hand at creating an admittedly rudimentary matrix of sorts. I wanted to know which events I really cared about and which would prove to be fool’s gold. To do this, I laid out each of the main events of the day and assigned each points based on three categories: level of intrigue, watchability and rooting interest. Each event received points between one and three based on my feelings.

Here is what I came up with:

This left me nowhere. Of the six big events, NBA game seven had me most intrigued but suffered because I didn’t care who won. The Yankees and the NFL draft had my rooting interest, but the events themselves were lessened because it was just a single game in May and the late rounds respectively.

The big boxing match and the Kentucky Derby seemed like the biggest draws because of their individualism, but that was their lone redeeming quality.

Of course, after the fact, NBA game seven seems like the winner. The game itself lived up to any and all expectations (if you ignore the fact that an errant horn ruined the Spurs’ final inbound play!!!).

Does this day mean something historically in your mind? To me, it was exciting as it was approaching and then splintered into just another day of sports. Maybe it’s different for pompous rich people with decisions to make on where to spend their time, but I cannot speak to that.

I don’t care how many sporting events you cram into a single day, it’s not going to top Super Bowl Sunday. It hardly even matters who’s playing in the Super Bowl. The NFL title game still tops all

This past Saturday was the closest thing to a ‘Biggest Sports Day Ever,’ yet the actual day itself did not feel anything like it. The hype was fun and real, but because of a lack of actual interest in half the day’s events, there was no way the hype would ever lead to actual pay off.

I also can’t put any real historical significance on a day in which boxing and horse racing were suppose to be our biggest draws. This is not the 1920’s or 1950’s. Those sports are niche, drawing hype, with little payoff. History could care less about the hype. If the Boxing Match ended with someone getting airlifted to a local hospital, sure its memorable and historical. But that has nothing to do with the sport of it all.

I filled out your matrix, leading to the same conclusion I had before assigning numbers to the obvious. Game 7 of the NBA Playoffs between the defending champion Spurs and the Los Angeles Clippers was easily the greatest event of the day and the entire weekend.

While you were infinitely more generous in your scoring, I applied one simple thought process to mine. Would I turn on this even to watch it and do I care enough to look up the outcome online?

Apologies to the Kentucky Derby and NHL Playoffs, but I didn’t care who won, nor did I look up anything related to the outcome of events. In regards to the “BIG” boxing match, I wanted to know the victor. That is all. I had no desire to watch the fight, nor did I have a rooting interest at all. Gambling creates such interest and I did not partake.

This leaves the three events that actually mattered to me as a sports fan, the NFL Draft, the NBA Playoffs, and the Yankees versus Red Sox game. I watched all three events on television, yet being the final rounds of the NFL Draft, this made for bad TV. I was captivated as a fan of the New York Jets and the NFL, but rounds 4-7 are not super exciting. Round one rocked, but that was last week, not on Saturday.

Yankees vs Red Sox is always fun, especially for fans of the teams. Being early May, the game admittedly held little significance to the season as a whole, but to Yankees’ fans the weekend series felt special. New York swept their bitter rivals, held claim to first place in the division, and proved they are not the pushovers they appeared to be in Spring Training. Add in Alex Rodriguez’s history home run, number 660, and this was a great weekend to be a Yankees’ fan.

NBA Playoffs wins. I watched the entire fourth quarter of the Clippers vs Spurs and that was the BEST event of the weekend. I’m a Clippers fan, so I was certainly invested in the outcome, but I’m a casual basketball fan, so watching an entire quarter of play was a big deal. This is a bitter rivalry and the game itself felt like an NBA Finals game. There were too many lead changes to count, tons of clutch possessions and shots made, and one huge Chris Paul push to get LA over the playoff hump.

The electricity in the Staples center was unreal and Doc Rivers’ team finally proving it can take down big dog competition in the Western Conference was incredible. The game ended right before the ‘Big’ boxing match got underway; perfect timing.

A great sports weekend indeed, but only a hint at what’s to come this year. Its going to be a year of rivalry.