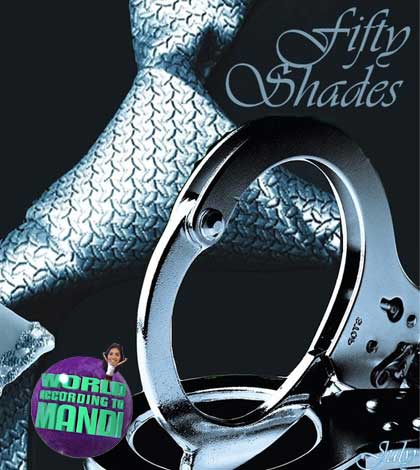 Fifty Shades of Grey has us perplexed. Ever since the books first came out, I’ve been unable to fathom the mass appeal of this story. I laughed my way through all three poorly written books, often reading passages out loud to my man. We chuckled, teased, and snickered every time. I had to power through books two and three, if only to complete the story. Yet the ending fell flat, so much so that I honestly wasn’t going to see the film.

I had an opportunity to see a free screening of Fifty Shades of Grey in theaters last Friday night and took it. My curiosity was screaming at me. Could the movie be good, or anything more than lots of cheesy sex scenes? I had low expectations going in, and ultimately it was still Fifty Shades of… Blah.

Let me first say that this was not a bad movie. If you read the book, or even if you didn’t, the look, feel, and tone of the film was spot on! It was exactly how I pictured it when reading. That’s definitely a plus for the movie. Also, the soundtrack was AMAZING! It was sensual, sexual, and it helped complete the overall tone. If you’re a fan of the book, the film stayed pretty true to form. If you didn’t read it, go watch the movie first. Books don’t have great music accompanying them.

Now for where the film lost us; the acting. I’ll be honest, deep down I wanted this movie to EXCEED my expectations. I wanted to walk out of the theater thinking “Damn that film brought it.” No such luck kids. Despite the pros noted above, it all begins and ends with the acting. A film like this needs two actors that are committed; fully committed to loving every moment of the S&M, sex, and debauchery. Committed to falling in love with one another, to being tortured by love, tortured by their inner demons, and tortured by one another. Neither Dakota Johnson nor Jaime Dornan truly embraced and fully committed to Anastasia and Christian.

First let’s discuss Dakota Johnson; damn, girl had a good body. She looked excellent, but otherwise fell completely flat. Yes, she was less annoying than Anastasia Steel in the book. One point for Dakota Johnson. Otherwise, we found her portrayal lackluster. There was no inner struggle to her character. Let’s not forget that Anastasia was a virgin. A virgin! Who would have known? No innocence to her either. She played a tightly wound Anastasia that was never let loose, and did she even like Christian Grey? She showed little attraction to her leading man.

As for Jaime Dornan, his portrayal of Christian Grey was pretty good. We were doubtful of him prior to watching the film, but he proved us wrong more or less. Damn is he sexy! His body is AMAZING. He also did a nice good job of playing Christian as both guarded and slightly awkward. It worked. However, just like his co-star, Jaime never completely let go and gave in to his character. There were moments when he said lines and he was definitely just saying a line, read straight from the book. The best example was his line “Because I’m fifty shades of fucked up, Anastasia.” When those words were uttered out of his mouth, they were just words. That’s it. No meaning, no feeling, absolutely nothing behind them. This sadly was not the only example.

For the life of me, I can’t understand how these two actors had absolutely no chemistry. They are both sexy, so there’s that to like at least. I’ve heard rumors that they dislike one another in real life, but regardless, I can’t understand how there was no commitment to each other. Nothing between them that said I love you, no matter what. That is the ONLY way that a movie like this works. Oh well, it wasn’t bad and ultimately made a boat load of money. Cue the sequels.

I wanted more from Fifty Shades of Grey the movie, because I wanted it to rise higher. To take something mediocre and give it depth! Regardless of how you feel about the content of the film, it only works if everyone goes all in. It was a fine movie, but missed where it mattered most. See it at your own risk and know you were all forewarned.