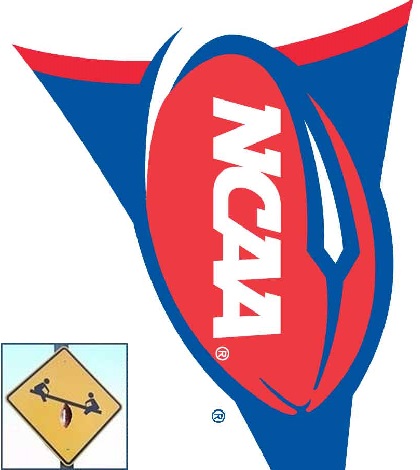 You are not going to sway me against math with your convoluted scenarios. That being said, I am fascinated to see how this four-teamer plays out. It’s surely going to be mayhem. To make matters worse, the committee is made up of people we actually know. They all have jobs and alma maters and biases that the public is deeply aware of. It’s going to be a shit storm from their very first poll that comes out!

If you aren’t concerned at all with the change to the FBS championship, how are you feeling about the recent Ed O’Bannon court ruling, coupled with the (now) back burner stories of Northwestern unionizing, Shabazz Napier not being able to eat while winning a national title and the rampant cheating going on in amateur recruiting?

Woah, woah, woah. Don’t put words in my mouth. I’m not ‘concerned’ about the changes to the FBS championship and college football, but don’t think for one second that I like what has transpired. Concern implies I have a stake in the outcome, which I do not. Whether the NCAA uses math or figure heads to rank its football teams has no bearing on my life. Therefore no concern on my part. But do I like it? No, not entirely.

I like a four team playoff better than a two team playoff. I would like an eight team playoff even more, but I’ll take what I can get at this point. The NCAA takes so long to change anything that its wonderful we are even having this debate.

That being said, I think it’s utterly ridiculous for them to get rid of the BCS rankings. Just because there is a BCS rankings does not mean that they have to play a BCS championship. Again, coupling those things is moronic. The BCS rankings were mathematics at its best. Add to that the USA Today coach’s poll and you get a really good picture of college football.

I’m not sure who decided they couldn’t have the best of both worlds, but its unfortunate the decision came down that way. I would have kept the BCS rankings. I would also have added in the group of figure heads you mentioned to judge the BCS rankings, the coach’s poll, and ultimately determine what if any changes needed to be made for a final year-end FBS team ranking to determine playoff entrants and bowl participants.

The BCS was not perfect, but figure heads will also not be perfect. My hope is that they get to look at the math while sitting around the table and ranking teams. Otherwise your concerns about gut feelings, alma maters, and job security are completely warranted.

As for the other wash of issues surrounding the NCAA, I was pleased to see the Ed O’Bannon court decision come down. It’s another step in the right direction, as the NCAA makes a ton of money off of video games while the athletes involved do not get traditional residuals. Overall I like seeing change being made, even if its being forced.

The only problem with changes being forced upon the NCAA is, at some point, aren’t a bunch of people going to realize the institution as a whole is rather pointless and corrupt? What purpose does the NCAA actually serve? Are you telling me the heads of each conference couldn’t create sports schedules between themselves and hold championship games at the end of the season? The NCAA only exists to hold onto that shred of amateurism for the “student-athletes.”

Once the student-athletes became 85-90% athlete as opposed to 50-50, the amateurism shtick didn’t fly. Too much money was being made off television contracts and players’ likenesses. Too much was being demanded of every athlete. The Northwestern union ruling seemed more important to me than the Ed O’Bannon case, although I’m not familiar with all the particulars of each. But the union formation was allowed to proceed because the students were deemed to be employees of the university.

It’s hard not to oversimplify the points here, but if college sports players are unpaid employees, what is the NCAA doing other than failing them in all aspects? If one change after another is forced upon the organization, it’s only a matter of time before the organization folds or ceases to be what it once was.

I do think this is a good thing, but it also could be cataclysmic for the NCAA and collegiate athletics as we presently know them. Don’t be surprised if, in a dozen years, college football is just the 50 biggest schools competing against each other off the field in monetary recruiting and on the field in a poor man’s NFL.

[If you missed Part one – NCAA College Football shuns math]