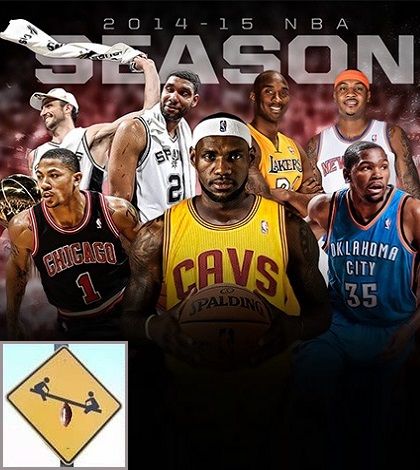 Early Injuries cause NBA upheaval, but are we in store for a new set of playoff teams?

If you couldn’t tell, that was the chorus to John Tesh’s Roundball Rock! The NBA is back baby!

…Although, what a bummer the first week of action has been, right? Things started off with that Cleveland Cavaliers home opener on Thursday that I caught most of. The beginning was electric, but it was evident real early on that LeBron was too hyped up. He was making weird passes and could sink a bucket. Kevin Love was great through what I watched, but the team seemed over anxious to make a splash. And therefore, they did not.

But whatever, that’s just one game. Who really cares? The real bummers picked up as Russell Westbrook broke his hand and Derrick Rose sprained (apparently) both of his ankles.

Now reports say Westbrook is going to be out at least a month after surgery, and who knows what Rose’s immediate future is. Injuries are such a bummer. I have no rooting interest in either the Thunder or the Bulls (or the Cavs for that matter). But the NBA is only great when there are great teams to watch.

Cleveland will be fine so it’s misguided to lump it in here. But what of Oklahoma City and Chicago, arguably two of the four favorites to win the NBA title this season? OKC is surely doomed. Durant is out two months and now Westbrook gone for a month himself. Surely doomed. Chicago is a bit murkier with the way that roster is constructed. But their ceiling relied on a healthy Rose, and it looks like that may never be a thing ever again.

Its been a common theme of the last several NBA seasons; Derrick Rose gets injures and the Lakers stink. Add to that very early season injuries in general, and this new NBA season feels like deja vu.

A quick note on the Lakers, who also lost a promising young player for the entire season due to injury. The league is better when the Lakers are good. It’s a simple fact. Whether you love them or hate them, the league is more fun with a winning team in purple and gold. But this aging squad of vets failing to succeed is predictable. Its unsettling to see Kobe Bryant lose consistently, but its reality.

I’m not worried about the Chicago Bulls, but for none of the reasons you expect. This season will be a roller coaster for Derrick Rose and Bulls fans. He has proven himself to get consistently injured. Expecting anything different is foolish. Luckily this latest Rose injury appears more minor, so not pushing too hard this early on is a good decision.

The flip side is what happened to OKC. Durant is out until the second half of the season. That’s no big deal in my book. I felt the team was good enough to hold fort with a winning record until then. Losing Westbrook for a month changes the dynamic considerably. This team has no real leader now. They will struggle to win games for a solid month. And it will take another two weeks or more to find any kind of rhythm once Westbrook returns, and then again several weeks to find new rhythm once Durant is finally healthy. Thankfully for OKC, there are eight playoff spots and this team can still secure one.

I hate to see so many early injuries, but the mantra goes that the first month of the NBA season is like pre-season. This is when injuries happen most. The games are often lopsided, play is inconsistent, and teams are learning to gel and work together. Unless you lose every game, the first month is a wash.

Going a step further, it’s not until January 1st that teams really need to have things figured out. You can enter the new year with a flat .500 record and feel decent about everything. This is what OKC is now hoping for. Same goes for Chicago. Because basketball is played at such high speeds, its easy to forget how long the season is. The NBA season is very long. At this early juncture I expect coaches will get exposed and bad teams will look good against opponents limited by injury. But I don’t expect a whole new set of playoff teams to emerge.

Photo and Logos courtesy of www.CLEVELAND.com, www.PINOYBASKETBALL.net, and the NBA